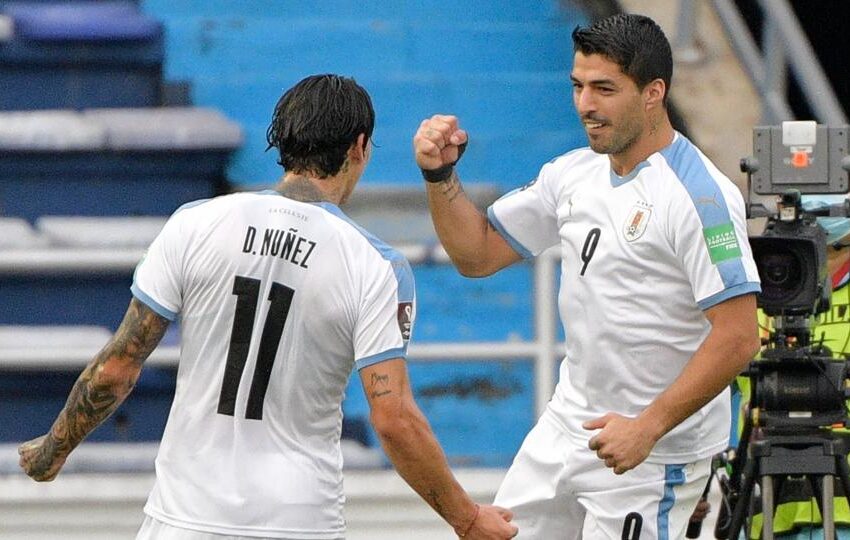 Liverpool’s formidable record against Portuguese opposition means plenty of attention before their Champions League quarter-final with Benfica was on the damage Jurgen Klopp’s all-star frontline might cause.

Certainly, the first leg went the way of the Premier League side, who were 3-1 victors in Portugal to take control of the tie ahead of the return fixture on April 13.

But Nelson Verissimo’s team might still be able to make life difficult for the Reds, with plenty of hopes pinned on a striker enjoying a phenomenal breakout season.

Darwin Nunez, who scored in the first leg, has 31 goals across all competitions and is garnering plenty of attention to the extent that Liverpool and the rest of the Premier League could soon be much more familiar with him.

When did Darwin Nunez join Benfica?

It’s fair to say that Nunez, now displaying his talents at the business end of the Champions League, did not take a conventional route to such a stage.

After coming through the ranks in his homeland with Penarol, he joined Spanish second-tier side Almeria on a five-year deal in 2018 — a move that netted his boyhood club £3.4 million.

Nunez was swiftly into his work in Spain and a 16-goal season was enough to persuade Benfica to splash out £20m on the youngster.

On the face of it, 11 goals from 24 starts and 36 appearances overall in 2020/21 was nothing to get overly excited about, but eye-catching flashes of pace, strength, intelligent link play and keen striking instincts were enough to keep the Nunez hype-train motoring.

In January 2021, the Telegraph reported Manchester City had earmarked Nunez as a potential successor to Sergio Aguero, while an illustrious compatriot had already mapped out a different career path.

Is Darwin Nunez the next Luis Suarez?

Liverpool fans know all about Uruguay’s impressive heritage when it comes to producing elite strikers, having enjoyed Luis Suarez’s action-packed tenure at the club.

Suarez went on to excel at Barcelona and was keen for Nunez to do likewise, having been impressed by his efforts at Almeria.

MORE: Simeone and Guardiola finally collide in missing rivalry of this era

“I recommended Darwin to Barcelona when he was at Almeria,” Suarez told Spanish journalist Gerard Romero on Twitch.

“I have 15 years of international experience. I know a thing or two about forwards. And I told them, ‘Pay attention to this one, he’s very good, he shows interesting things’.

Suarez’s acrimonious departure from Barcelona in 2020 means there might be fair bit of points-scoring going on here, but it’s not all bitterness and parochialism. 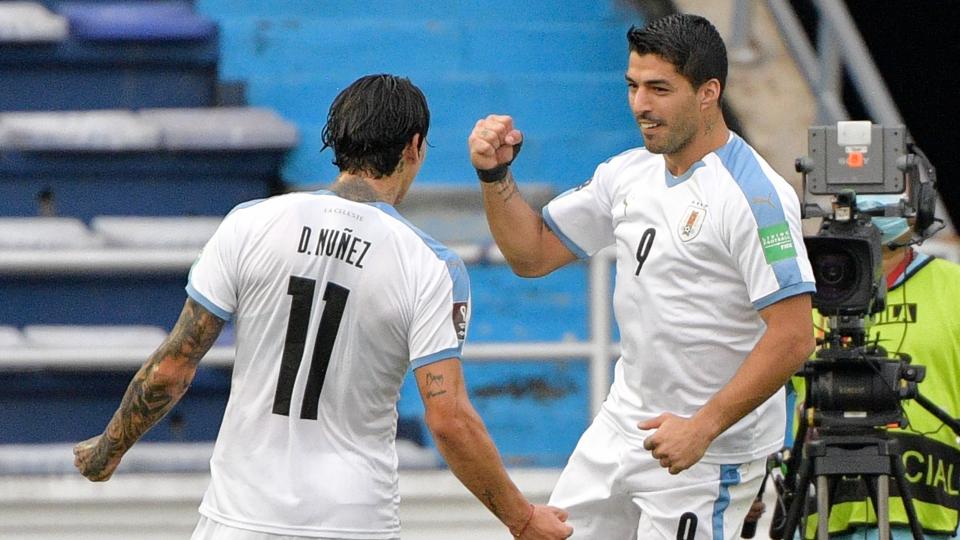 In terms of similarities between the two, keen anticipation, cute movement and a lethal right foot are instantly apparent. Nunez’s play also displays the selflessness for which his compatriot was famed when he operated alongside Lionel Messi and Neymar at Barcelona.

Indeed, Nunez’s relatively lower goal return last term can in part be put down to former Benfica boss Jorge Jesus asking him to do a selfless job on the left of the attack and occupying the right-back. He scored six goals in 29 Primeira Liga outings last season.

Playing as a central striker in the Europa League, he fired five in seven and Nunez’s efforts in his natural position this term place him among the elite.

How does Darwin Nunez compare to Erling Haaland and Robert Lewandowski?

The Benfica centre-forward’s 31 goals, which included a hat-trick against Belenenses on April 9, have come in 34 appearances overall this term, with 25 of those starts.

He has eight more goals than Erling Haaland, although the Borussia Dortmund star has been as familiar to the treatment table as he has the gossip pages this term.

Nunez, at 1.34, boasts a better goals-per-90-minutes rate in league football than Haaland (0.98) this season, and both outstrip the likes of Karim Benzema, Harry Kane and Dusan Vlahovic in this regard.

Robert Lewandowski’s 47 goals in 40 appearances might put him in a category of his own, but Nunez quite clearly justifies the hype.

Naysayers will make claims over the relative weakness of Portugal’s top flight, although five goals in nine Champions League appearances — including the winner in the previous round away to Ajax — is a handy enough return.

If he adds to that tally against Liverpool again, expect the rumour mill to go into overdrive. 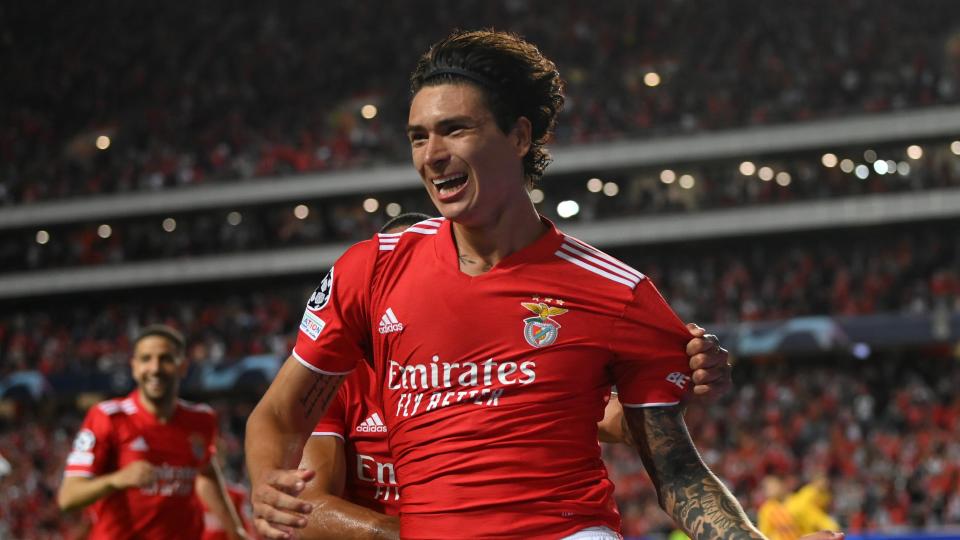 Is Darwin Nunez signing for a Premier League club?

In the middle of last season when Nunez was beginning to make waves at Benfica, the Telegraph reported Manchester City viewed him as a potential replacement for club-record goalscorer Sergio Aguero.

City seem all set to make a move for Haaland now, but if either Real Madrid or super-agent Mino Raiola produce complications on that front, Nunez could represent a viable alternative and one who would not similarly disrupt the Premier League champions’ wage structure.

This week, the same publication claimed Manchester United’s £60m interest in Nunez hinged on whether they would be able to realise their fading Champions League dreams. Arsenal’s back-to-back defeats to Crystal Palace and Brighton and Hove Albion might help in that regard, while Mikel Arteta’s men are also lacking in the striker department.

Benfica’s Darwin Núñez has scored more goals in top-flight European competition including some big Champions League moments than any other player under the age of 23 this season;

Given some of Arsenal’s stylistic similarities to City and Arteta’s time working under Pep Guardiola, it would not be a surprise to see a player of Nunez’s attributes coveted in north London.

In that part of the capital, Antonio Conte has frequently spoken of how he likes to play with a “point of reference” striker and Nunez fits that bill. However, any interest from Tottenham would come down to whether or not captain Harry Kane — now a target for United, according to the Athletic — decides to stick around.

Below that big-six contingent, clubs with ambitions to challenge England’s elite — Newcastle United, Aston Villa and West Ham — have also been linked with Nunez at various points over recent months.

Whatever way his future shakes out, it seems very unlikely he will remain a mystery to football fans in England this time next year. Liverpool will be hoping to keep Nunez a secret for a little while longer, but that might be no easy task.

Speaking after the Belenenses game, Benfica coach Nelson Verissimo was asked if Nunez could be sold for a fee that would rival the €126m that Atletico Madrid paid for Joao Felix in 2019.

Laughing, he told reporters: “What do you think? Darwin is an excellent player. He has shown all his quality, he has helped the team a lot and the team has also helped him.

“As a result of his growth throughout the season and of his performances in the Champions League, it is natural for him to arouse the interest of the big European clubs.

“As a Benfica fan, I hope he goes for numbers close to those of Joao Felix, but that’s a question that is not up to me.”