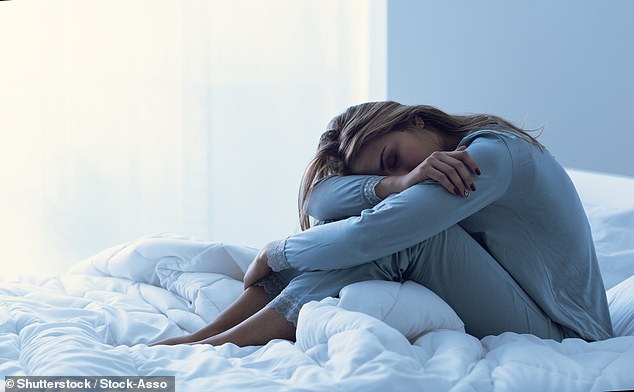 Insomniacs might be at higher risk of developing type 2 diabetes, a study suggests.

Bristol University researchers found people who struggled to sleep had higher blood sugar levels — a marker of the condition.

The findings suggest treating insomnia itself through lifestyle changes or medication could stop tens of thousands of Britons from developing the condition.

The team calculated that treating insomnia could trigger a drop in blood sugar levels comparable to losing 14kg (2st 3lbs).

Dozens of studies have shown how people who toss and turn at night or have a later bedtime are at a higher risk of type 2 diabetes.

But researchers say their study is the most comprehensive to suggest a lack of sleep itself causes higher blood sugar levels — and ‘could play a direct role’ in developing type 2 diabetes.

They didn’t suggest a biological mechanism for their findings, published in Diabetes Care.

But earlier studies have found sleep deprivation increases insulin resistance, levels of stress hormone cortisol and inflammation in the body, all of which can have an effect on blood sugar.

And experts claim those who are tired are more likely to eat more and turn to sugary foods. Type 2 diabetes is mainly driven by obesity.

Researchers at Bristol University, who studied more than 300,000 Britons, found those who had problems getting to or staying asleep were more likely to have higher blood sugar levels — a marker of the condition

To assess whether sleep patterns played any role on blood sugar levels, researchers collected data on 336,999 adults from the UK Biobank.

They examined data on whether the participants, mostly in their fifties, suffered from insomnia.

They probed information on how much sleep they got per night, how tired they felt during the day, napping habits and whether they were a morning or evening person.

Diabetes is a lifelong condition that causes a person’s blood sugar level to become too high.

There are 2 main types of diabetes:

Type 2 diabetes is far more common than type 1. In the UK, around 90 per cent of all adults with diabetes have type 2.

The amount of sugar in the blood is controlled by a hormone called insulin, which is produced by the pancreas (a gland behind the stomach).

When food is digested and enters your bloodstream, insulin moves glucose out of the blood and into cells, where it’s broken down to produce energy.

However, if you have diabetes, your body is unable to break down glucose into energy. This is because there’s either not enough insulin to move the glucose, or the insulin produced does not work properly.

There are no lifestyle changes you can make to lower your risk of type 1 diabetes.

Those who said they ‘usually’ had difficulty getting to sleep or staying asleep (28 per cent of the group) had higher blood sugar levels than those who said they ‘never’, ‘rarely’ or ‘sometimes’ faced these problems, a mathematical analysis of the data showed.

But there was no sign the other traits — sleep duration, daytime sleepiness, napping and when they were most energetic — had any effect.

The team said the findings could improve understanding of how sleep disturbance influences type 2 diabetes risk.

The study also suggests lifestyle and pharmacological interventions that improve insomnia might help to prevent or treat diabetes, which 4.7million people in the UK and 37million in the US suffer from.

People suffering from insomnia are told to go to bed and wake up at the same times each day, avoid a big meal late at night and exercise regularly during the day.

If lifestyle changes do not work, current insomnia treatments include cognitive behavioural therapy, a talking therapy that aims to change thoughts and behaviours that stop someone from sleeping.

If this is not effective, patients are usually given a short-term course of sleeping tablets or pills containing the hormone melatonin, which occurs naturally in the body and helps control sleep patterns.

The team said future studies should examine how each of these treatments impact blood sugar levels in people with and without diabetes.

This could establish ‘potential new treatments’ for preventing and treating the condition, they said.

James Liu, a researcher at Bristol Medical School and study author, said: ‘We estimated that an effective insomnia treatment could result in more glucose lowering than an equivalent intervention, which reduces body weight by 14kg in a person of average height.

‘This means around 27,300 UK adults, aged between 40 and 70-years-old, with frequent insomnia symptoms would be free from having diabetes if their insomnia was treated.’

Dr Faye Riley is research communications manager at Diabetes UK, which funded the study, said: ‘We know from past research that there’s a link between sleep and a person’s risk of type 2 diabetes.

‘But it hasn’t been clear which comes first, bad sleep or higher blood sugars, or if other factors are at play.’

The study ‘gives us important insights into the direction of the relationship between sleep and type 2 diabetes, suggesting that insufficient sleep ‘can cause higher blood sugar levels and could play a direct role in the development’ of the condition, she said.

‘Knowing this could open up new approaches to help prevent or manage the condition,’ Dr Riley said.

But she noted that type 2 diabetes is a ‘complex condition with multiple risk factors’, so eating a balanced diet and being active are ‘essential components of good health’, including for those living with or at risk of developing the condition.