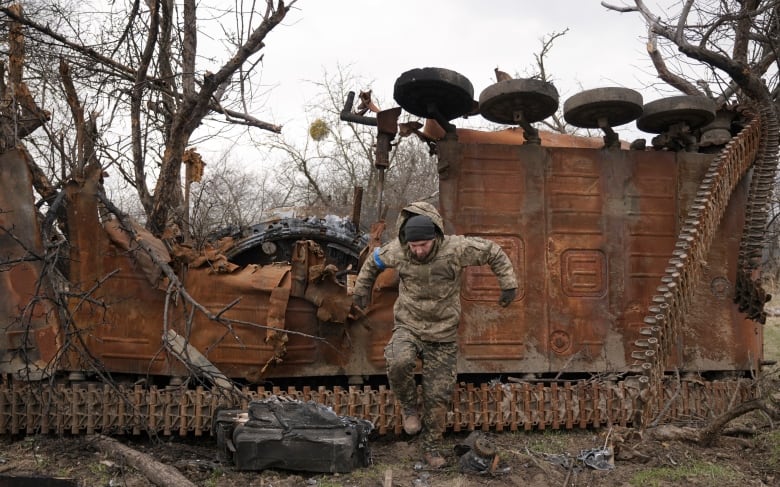 The United Nations General Assembly voted Thursday to suspend Russia from the world organization’s leading human rights body over allegations of horrific rights violations by Russian soldiers in Ukraine, which the United States and Ukraine have called tantamount to war crimes.

The vote was 93-24 with 58 abstentions, significantly lower than the vote on two resolutions the assembly adopted last month demanding an immediate cease-fire in Ukraine, withdrawal of all Russian troops and protection for civilians. Both of those resolutions were approved by at least 140 nations.

U.S. Ambassador Linda Thomas-Greenfield launched the campaign to suspend Russia from its seat on the 47-member Human Rights Council in the wake of videos and photos of streets in the town of Bucha strewn with corpses of what appeared to be civilians after Russian soldiers retreated. The deaths have sparked global revulsion and calls for tougher sanctions on Russia, which has vehemently denied its troops were responsible.

Russia is the second country to have its membership rights stripped at the rights council which was established in 2006. In 2011, Libya was suspended by the assembly when upheaval in the North African country brought down longtime leader Moammar Gadhafi.

While almost half of the UN’s 193 member nations supported the resolution, more than half either voted against it, abstained or didn’t vote.

Explaining their decision not to support the resolution, some countries called it premature, noting that there are ongoing investigations into whether war crimes have occurred, or said it would undermine the credibility of the Human Rights Council and the United Nations. Others said the resolution reflected American and European geopolitical agendas and what opponents called Western hypocrisy and selective outrage about human rights.

Before the vote, Ukraine’s UN Ambassador Sergiy Kyslytsya urged assembly members to keep the Human Rights Council from “sinking” and suspend Russia, saying it has committed “horrific human rights violations and abuses that would be equated to war crimes and crimes against humanity.”

“Russia’s actions are beyond the pale,” he said. “Russia is not only committing human rights violations, it is shaking the underpinnings of international peace and security.”

“What we’re seeing today is an attempt by the United States to maintain its dominant position and total control,” he said. “We reject the untruthful allegations against us, based on staged events and widely circulated fakes.”

In Brussels, NATO foreign ministers concluded two days of meetings in Brussels with a promise to provide more support to fight the latest Russian offensive as Ukraine braced to battle for control of its industrial east.

NATO Secretary General Jens Stoltenberg said alliance members are “determined to do more” to help Ukrainians “defend their homes and their country, and push back the invading forces.”

“We agreed that we must further strengthen and sustain our support to Ukraine, so that Ukraine prevails in the face of Russia’s invasion,” he said.

Officials in Ukraine told residents to leave the eastern Donbas region while they still can and urged Western nations to send more weapons Thursday, a week after Russian forces withdrew from the shattered outskirts of Kyiv to regroup for an offensive in the country’s east.

NATO allies are pressing for a quick end to the war in Ukraine, says NATO Secretary General Jens Stoltenberg, but they’re also preparing for the possibility it could last years. 1:36

The focus of Russia’s six-week-old invasion failed to take Ukraine’s capital quickly and achieve what Western countries say was President Vladimir Putin’s initial aim of ousting the Ukrainian government. Russia’s focus is now on the Donbas, a mostly Russian-speaking region in Eastern Ukraine.

In Brussels, Ukrainian Foreign Minister Dmytro Kuleba urged NATO to provide more weapons for his country to help prevent further atrocities like those reported in the city of Bucha, northwest of Kyiv.

“My agenda is very simple. It’s weapons, weapons and weapons,” Kuleba said as he arrived for talks with NATO’s foreign ministers.

“We know how to fight. We know how to win. But without sustainable and sufficient supplies requested by Ukraine, these wins will be accompanied by enormous sacrifices,” Kuleba said on Wednesday. “The more weapons we get and the sooner they arrive in Ukraine, the more human lives will be saved.”

After the meetings, Kuleba called for help from allies within days, not weeks, “or your help will come too late, and many people will die.”

Kuleba said the discussion at NATO was not about the list of weapons Ukraine will get but rather about the timeline for when they will be given, noting that he has no doubt that Ukraine will have the weapons necessary to fight.

A U.S. defence official speaking on condition of anonymity said Russia had pulled all of its estimated 24,000 or more troops from the Kyiv and Chernihiv areas in the north, sending them into Belarus or Russia to resupply and reorganize, probably to return to fight in the east.

Growing numbers of Putin’s troops, along with mercenaries, have been reported moving into the Donbas. “Later, people will come under fire,” Ukrainian Deputy Prime Minister Iryna Vereshchuk said in urging civilians to evacuate from the mostly Russian-speaking industrial region, “and we won’t be able to do anything to help them.”

She said Ukraine and Russian officials agreed to establish 10 civilian evacuation routes from Donetsk, Luhansk and the Zaporizhzhia region. She said residents would be able to seek safety in the cities of Zaporizhzhia in southeast Ukraine and Bakhmut in the east.

Another Western official, also speaking on condition of anonymity to discuss intelligence estimates, said it may take Russia’s battle-damaged forces as much as a month to regroup for a major push on Eastern Ukraine.

In his nightly address Wednesday, Ukrainian President Volodymyr Zelensky also warned Russia’s military is gearing up for a new offensive in the east. He said Ukrainians fighting the offensive “will not retreat.”

Air attacks on the east

He said the besieged southern city of Mariupol was holding out and that he believed the Russian efforts to surround Ukrainian troops in the east would be in vain. Capturing Mariupol would allow Russia to secure a continuous land corridor to the Crimean Peninsula, which Moscow seized from Ukraine in 2014.

More than 100,000 people still need to be evacuated urgently from Mariupol, Mayor Vadym Boichenko said on Thursday, describing the situation in the port city as a humanitarian catastrophe.

“The remaining more than 100,000 people are praying for rescue — a full-scale evacuation is needed,” he said on national television.

Boichenko said that of the more than 5,000 civilians killed during weeks of Russian bombardment and street fighting, 210 were children. Russian forces bombed hospitals, including one where 50 people burned to death, he said.

Boichenko said more than 90 per cent of the city’s infrastructure was destroyed. The attacks on the strategic city on the Sea of Azov have cut off food, water, fuel and medicine and pulverized homes and businesses.

Ukrainian authorities said the bodies of least 410 civilians were found in towns around Kyiv, victims of what Zelensky has portrayed as a Russian campaign of murder, rape, dismemberment and torture. Some victims had apparently been shot at close range. Some were found with their hands bound.

Zelensky on Wednesday accused Russia of interfering with an international investigation into possible war crimes by removing corpses and trying to hide other evidence in Bucha, northwest of Kyiv.

“We have information that the Russian troops have changed tactics and are trying to remove the dead people, the dead Ukrainians, from the streets and cellars of territory they occupied,” he said during his latest video address. “This is only an attempt to hide the evidence and nothing more.”

WATCH | Russia accused of covering up civilian killings in Ukraine:

No signs of Russia backing off in Ukraine war, accused of covering up massacres

He called on Russians to demand an end to the war, “if you have even a little shame about what the Russian military is doing in Ukraine.”

In reaction to the alleged atrocities outside Kyiv, the U.S. announced sanctions against Putin’s two adult daughters and said it is toughening penalties against Russian banks. Britain banned investment in Russia and pledged to end its dependence on Russian coal and oil by the end of the year.

U.S. President Joe Biden announced a new round of sanctions against Russia, targeting the country’s biggest banks and President Vladimir Putin’s two adult daughters. Across the pond, the European Union is weighing sanctions on Russian energy exports including a ban on coal. 2:02

The European Union is also expected to take additional punitive measures, including an embargo on coal.

The Kremlin has insisted its troops have committed no war crimes and alleged the images out of Bucha were staged by the Ukrainians.