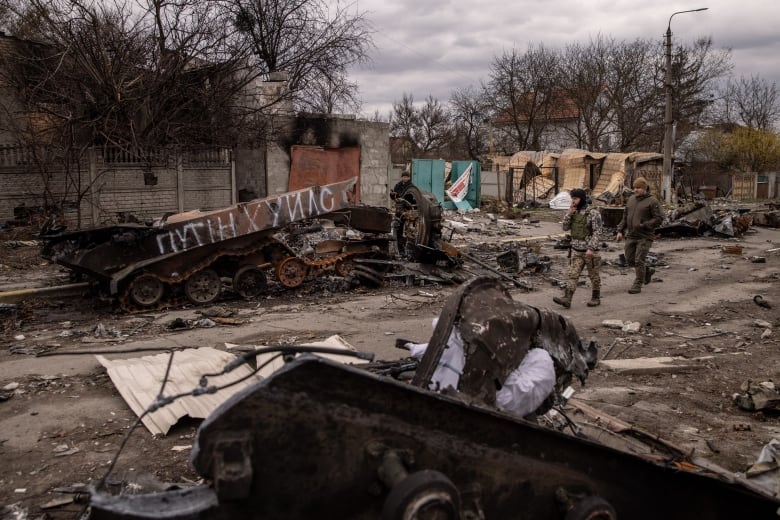 Ukraine wants sanctions that are economically destructive enough for Russia to end its war, after accusing some countries of still prioritizing money over punishment for civilian killings that the West condemns as war crimes.

After grisly images of dead civilians in the streets of Bucha sparked international condemnation, Zelensky said Kremlin forces were trying to cover up evidence of atrocities.

“We have information that the Russian military has changed its tactics and is trying to remove people who have been killed from streets and basements … this is just an attempt to hide the evidence and nothing more,” Zelensky said, but did not provide evidence.

Moscow has denied targeting civilians and says images of bodies in Bucha were staged to justify more sanctions against Moscow and derail peace talks.

Russia’s six-week-long invasion has forced over four million to flee abroad, killed or injured thousands, left a quarter of the population homeless, turned cities into rubble and prompted a slew of Western restrictions on Russian elites and the economy.

Washington on Wednesday announced measures such as sanctions on Russian President Vladimir Putin’s two adult daughters and Russia’s Sberbank, and a ban on Americans investing in Russia.

WARNING: This video contains graphic footage | Ukrainian President Volodymyr Zelensky gave a chilling account of the horrors left behind by Russian troops in Bucha to members of the United Nations Security Council as he made an impassioned plea for the Kremlin to be held accountable. 2:02

The United States also wants Russia expelled from the Group of 20 major economies forum and will boycott a number of meetings at the G20 in Indonesia if Russian officials show up.

But the head of Ukraine’s presidential office Andriy Yermak said late on Wednesday that its allies must go further.

“Sanctions against Russia must be ruinous enough for us to end this terrible war,” he said.

“My goal is to impose an embargo on the supply to Russia of technology, equipment, minerals and ores [and] rare-earth, dual-use minerals and thus stop the production of weapons in Russia.”

Zelensky was earlier critical of some in the West.

“The only thing that we are lacking is the principled approach of some leaders … who still think that war and war crimes are not something as horrific as financial losses,” he told Irish lawmakers.

European Union diplomats failed to approve new sanctions on Wednesday, as technical issues needed to be addressed, including whether a ban on coal would affect existing contracts, sources said.

EU member Hungary said it was prepared to meet a Russian request to pay rubles for its gas, breaking ranks with the rest of the 27-nation bloc and highlighting the continent’s reliance on imports that have held it back from a tougher response on the Kremlin.

Western policymakers have denounced the killings in Bucha as war crimes, and Ukrainian officials say a mass grave by a church there contained between 150 and 300 bodies.

Russia says it is engaged in a “special military operation” designed to demilitarize and “de-Nazify” Ukraine. Ukraine and Western governments reject that as a false pretext for its invasion.

Russia continues to ready for an attack to gain full control over the eastern breakaway regions of Donetsk and Luhansk as well as the besieged southern port of Mariupol, where tens of thousands are trapped, the general staff of the Ukrainian armed forces said late on Wednesday.

Ukrainian authorities say they cannot help people evacuate from the eastern front line town of Izyum or send humanitarian aid because it is completely under Russian control as the east sees the worst fighting.

WATCH | Some Ukrainians who fled war are heading home:

Aboard a refugee train with Ukrainians heading home

Despite the risks, some Ukrainian refugees are returning to the war-torn country — each with their own reasons. They board trains headed east toward areas devastated by war, hoping to reclaim whatever’s left of their country. 7:38

Many in the eastern town of Derhachi, just north of Kharkiv and near the border with Russia, have decided to leave while they can.

Buildings have been badly damaged by Russian artillery. Kharkiv itself has been hammered by air and rocket strikes from the start.

Mykola, a father of two in Derhachi who declined to give his surname, said he could hear the thud of bombardments every night, and had been hunkering down with his family in the corridor of their home.

“[We’ll go] wherever there are no explosions, where the children won’t have to hear them,” he said, hugging his young son and struggling to hold back the tears.

Vladimir Putin’s ambitions in Ukraine are forcing NATO to consider a long fight with Russia, said Secretary General Jens Stoltenberg. ‘This can last a long time,’ he said. 0:33

The banking sanctions are “a direct blow to the Russian population [and] ordinary citizens,” the Tass news agency cited Russia’s U.S. ambassador Anatoly Antonov as saying.

Britain also froze Sberbank’s assets, and said it would ban imports of Russian coal by the end of the year.

But Europe is walking a tightrope as Russia supplies around 40 per cent of the EU’s natural gas consumption and the bloc also gets a third of its oil imports from Russia, about $700 million US per day.

Germany, Europe’s largest economy which relies on Russian gas for much of its energy needs, warned that while it supported ending Russian energy imports as soon as possible it could not do it overnight.

Despite the sanctions, the Russian ruble extended recovery gains on Wednesday, returning to levels seen before the invasion, shrugging off fears of a potential default on international debt as it paid dollar bondholders in rubles.