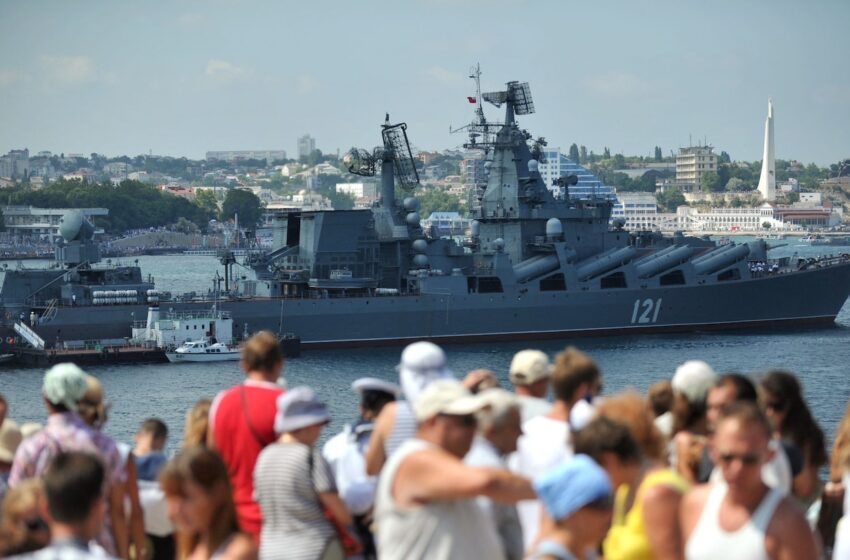 Conflicting assertions about what happened to a key Russian warship swirled Thursday, with some Ukrainians claiming that a missile attack sank the ship and the Kremlin saying only that it suffered significant damage from a fire.

But whatever happened to the Russian navy missile cruiser Moskva — the flagship of its Black Sea fleet — the episode serves as a significant morale boost for beleaguered Ukrainian forces and a major blow to Russia, military experts said.

Instead, the Russians said they would investigate what caused the fire, which they said detonated the ship’s ammunition. All of the ship’s approximately 500 crew members were evacuated to other Black Sea fleet ships in the area, Russia said.

Russia’s Defense Ministry later said that “the fire on the cruiser Moskva has been localized” and that “explosions of ammunition have been stopped,” the RIA Novosti news agency reported. It said the ship is maintaining “buoyancy” and that its “main missile armament” was not damaged. The ministry added that efforts are underway “to tow the cruiser to the port,” RIA Novosti reported.

Ukraine said in an update that the Moskva “was severely damaged” by a Neptune missile that caused a fire. “Other units of the ship’s group tried to help, but a storm and a powerful explosion of ammunition overturned the cruiser and it began to sink,” the Ukrainian military said.

Adding to the confusion, an adviser to Ukrainian President Volodymyr Zelensky told CNN that senior Ukrainian officials were not sure what was true. “Either two sailors were smoking in the wrong place, or once again certain safety measures were violated,” said Oleksiy Arestovych. He later tweeted that the ship “drowned.”

Pentagon spokesman John Kirby said early Thursday in an interview on CNN that “there was an explosion” on the ship, but he added that the United States could not immediately determine whether the ship was struck by a missile.

“We’re not quite exactly sure what happened here. We do assess that there was an explosion, at least one explosion on this cruiser. A fairly major one at that, that has caused extensive damage to the ship,” he said. He added that the vessel was still afloat and was probably headed to Sevastopol to undergo repairs.

The Moskva had been operating along with other Russian ships about 60 miles south of the port city of Odessa, Kirby said. He added that “the explosion was sizable enough that we picked up indications that other naval vessels around her tried to come to her assistance, and so eventually that wasn’t apparently needed.”

Early Thursday, the Center for Analysis of Strategies and Technologies, a Moscow-based think tank, said on its Telegram channel that it believed the ship had been sunk and sided with the Ukrainian assessment. “The flagship of the Russian Black Sea Fleet, the Moskva cruiser, was indeed attacked by the Neptune anti-ship missiles from the coastline between Odessa and Nikolaev,” it said. A drone distracted the ship before the missiles hit, it said.

If the 12,000-ton Moskva went under, it would be the largest wartime sinking of a naval vessel since World War II.

The Washington Post could not independently verify the accuracy of the claims.

The Moskva does not have major strategic value, but as the Black Sea flagship, it possesses symbolic significance, said Artyom Lukin, an international relations professor at the Far Eastern Federal University in Vladivostok, Russia.

The ship is named after Russia’s capital and was at the center of a widely reported attack on Snake Island, when Ukrainian border guards drew global attention for insulting Russian troops during the early days of the invasion.

“The loss of not just a principal surface combatant in the Russian navy, but also the fleet flagship, would amount to more of a psychological blow to the Russians,” said Collin Koh, an expert on maritime security at Singapore’s Nanyang Technological University.

The notion that Ukrainian missiles hit the Moskva reinforces “the image of hardened resistance by the Ukrainians” and sows “more doubt in the minds of Russian servicemen,” particularly the sailors serving on Russian warships off Ukraine’s southern coast, he added.

The damage to the Moskva is more significant because of previous Russian naval losses, said James Black, an expert on the Russian military at the Rand Corp. Last month, Ukraine’s navy said it hit a Russian amphibious landing ship in Berdyansk, a Ukrainian port that Russian forces have occupied.

Regardless of what caused the damage to the Moskva, “it will likely be seen as poetic justice by Ukrainians and their supporters,” Black said.