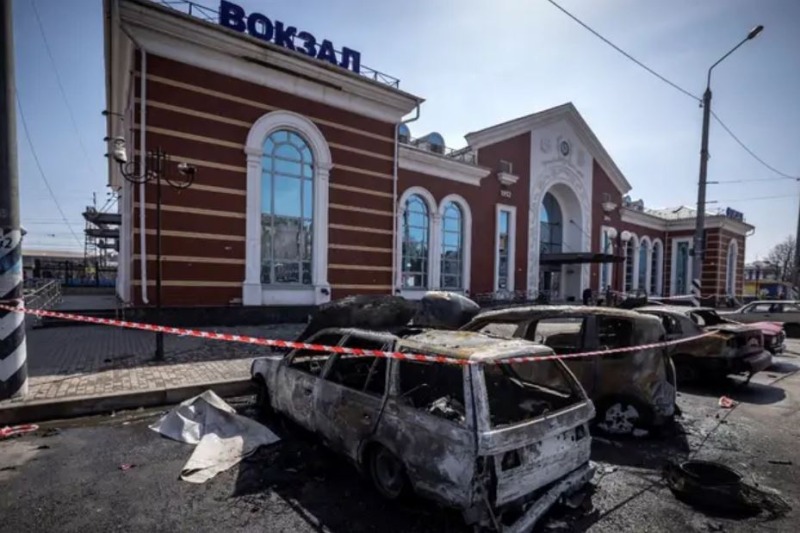 Ukraine-Russia: The “difficult” peace negotiations after the incident at Kramatorsk station In the face of an attack on a train station in Kramatorsk, eastern Ukraine, on Friday, the progress of peace talks between Ukraine and Russia seems compromised. The perpetrators of the attack have not been identified and the belligerents exchange accusations of responsibility.

As Kramatorsk railway station in eastern Ukraine was the target of a missile attack on Friday morning as Ukrainian families tried to flee, peace talks aimed at establishing a ceasefire fire, seemed difficult to carry out, by the very admission of the parties to the conflict.

At least 50 people, including five children, were killed Friday in a missile attack on the Kramatorsk train station in eastern Ukraine, from where evacuations of civilians were taking place, according to the governor of the region.

Moscow has denied being the author of this strike. “Only Ukrainian forces use tactical missiles whose fragments were found in Kramatorsk”said the Russian Ministry of Defense.

“Any enlargement of NATO will not bring security and stability”the Kremlin said on Friday, and for its part, the Russian Foreign Ministry estimated that the “Continued supply of arms by NATO to Ukraine will prolong the conflict”.

Despite the new incident, Russia and Ukraine still “agree” to meet for talks in Turkey, a senior Turkish official has said.

“Russia and Ukraine agree to hold talks in Turkey, but they remain far from agreeing on a common text”he told reporters.

Friday, after a meeting with his Armenian counterpart, the head of Russian diplomacy, Sergei Lavrov commented on the situation, admitting that the negotiations with Ukraine “are difficultadding that Russia wants guarantees of neutrality of Ukraine”.

“We are working with Armenia and Azerbaijan in search of a peace treaty between the two countries” he said.

Several subjects crystallize the negotiations between the two countries in conflict, in particular that of the Crimea and the Donbass, the “security guarantees” by suggested countries like “guarantors” of Ukraine’s neutrality during the last talks which took place in Turkey on 29 March in Istanbul.

During this last meeting, discussions on the question of the“neutrality”of Ukraine had taken place. On the subject of security guarantees.

On the subject of security guarantees, the Ukrainian delegation had proposed that around ten countries, including the five members of the Security Council as well as Italy, Germany, Israel and Turkey in particular, act as “guarantors” of its neutrality.

“They need to define these security guarantees, because some of the countries (concerned) are worried about being drawn directly into a direct confrontation with Russia”said the Turkish official on condition of anonymity.

If the meetings in Turkey had been able to trace the outlines of the beginning of a truce between the two belligerents, the recent events linked especially to the bodies of civilians found in Doutcha with satellite images, for supporting evidence, have clearly reduced hopes to see the negotiations break through towards a ceasefire.

Several European capitals, including Germany, Spain, and Britain responded to these events with the expulsion of Russian diplomats. Moreover, the Europeans have agreed on a new set of sanctions against Russia.

On Friday, the two daughters of Russian President Vladimir Putin and that of his Foreign Minister Sergei Lavrov were in turn the target of American sanctions.

“As Europeans, we are taking new sanctions. And we continue to support Ukraine humanitarianally, militarily and financially.”added the French president, underlining his support for “investigations so that justice is done”.