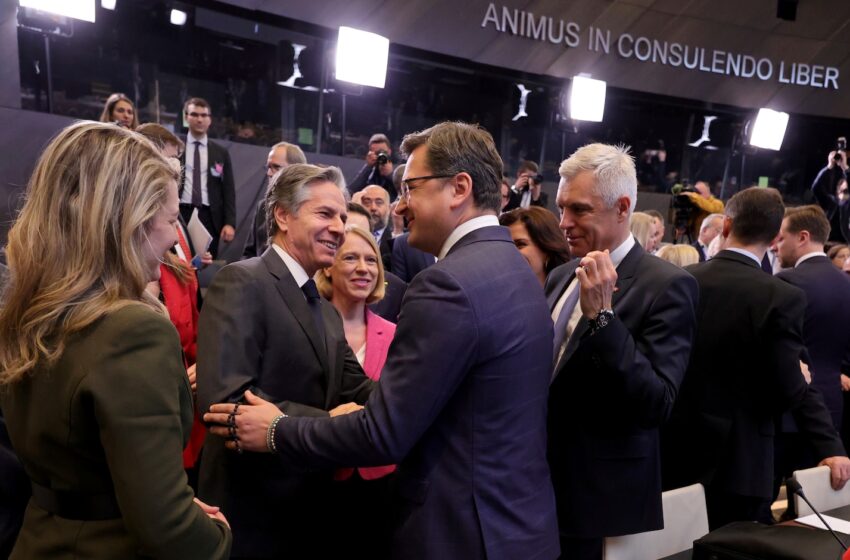 BRUSSELS — Ukraine’s top diplomat made a pointed appeal to NATO on Thursday to drop reservations about providing additional arms to Ukrainian forces that he said were urgently needed to prevent further Russian atrocities against civilians.

Foreign Minister Dmytro Kuleba traveled to Brussels to address a gathering of his counterparts from across the Western alliance, saying he had a threefold agenda: “weapons, weapons, weapons.”

“The more weapons we get, and the sooner they arrive in Ukraine, the more human lives will be saved,” Kuleba said ahead of the meeting. “The more cities and villages will not be destructed. And there will be no more Buchas,” he said, referencing the city outside Kyiv where the withdrawal of Russian troops revealed scenes of horrific human suffering, including apparently tortured and executed civilians.

“I call on all allies to put aside their hesitations, their reluctance to provide Ukraine with everything it needs,” Kuleba continued. “Because, as weird as it may sound, but today weapons serve the purpose of peace.”

He said Kyiv, struggling to gain an upper hand against a larger, better armed Russian force, faced a particular need for aircraft, armored vehicles, anti-ship missiles and additional air defense systems. NATO nations have provided an increasing array of arms since Russia’s invasion began on Feb. 24, including anti-aircraft missiles, tanks and kamikaze drones, but alliance members, nervous that Russia might launch a retaliatory attack, have stopped short of sending fighter jets or establishing a no-fly zone over Ukraine.

Secretary General Jens Stoltenberg echoed the need for NATO countries to provide additional light and heavy weaponry to Ukrainian forces, whose stiff resistance helped force Russia to pull back from positions around Kyiv and turn toward southern and eastern Ukraine.

Kuleba characterized the distinction that some NATO members have made between offensive and defensive weapons as “hypocritical,” and he criticized the argument that expanding support could pull NATO into a direct conflict with Russia. Ukraine is not a NATO member.

“I think the deal that Ukraine is offering is fair. You give us weapons; we sacrifice our lives, and the war is contained in Ukraine,” he said. “This is it.”

Kuleba’s blunt appeal echoed the approach that other Ukrainian leaders, particularly President Volodymyr Zelensky, have taken as they seek to rally the world against Russian President Vladimir Putin’s assault: direct and vocal criticism of anything less than full support for Ukraine and a singling out of nations that fail to meet that mark.

Kuleba named Germany as an example of nations that had held back from giving as much military support as they might provide. “While Berlin has time, Kyiv doesn’t,” he said.

Divisions among Western nations about how far to go with military aid to Ukraine are also visible in the economic arena, as some countries call for more drastic action to deprive Russia of energy income, while others balk at steps that could increase the burden felt by European consumers.

While the European Union this week proposed a ban on Russian coal imports, the bloc has yet to halt purchases of Russian oil and gas that continue to provide Moscow a valuable inflow of cash. Ukraine has condemned that position and has called for, on top of a slew of global sanctions already in place, all Russian banks to be cut off from the global financial system.

“I hope we will never face a situation again when to step up the sanctions pressure, we need atrocities like Bucha to be revealed and to impress and to shock other partners to the extent that they sit down and say, ‘Okay, fine‚ we will introduce new sanctions,’ ” Kuleba said.

Images of mass graves and civilian corpses strewn on the streets of Bucha have prompted international outrage. Even before, the Biden administration announced last month a formal assessment that Russian forces were committing war crimes in Ukraine.

Kuleba is expected to meet later in the day with U.S. Secretary of State Antony Blinken.

In remarks posted Wednesday on the State Department’s Telegram channel, as part of an attempt to reach the Russian audience, Blinken said arms provided by Western nations had been instrumental in blocking Russia’s failed attempt to seize Kyiv.

The Biden administration has announced a series of weapons transfers to Ukraine, including most recently $100 million in Javelin antitank missiles.

“What we’re focused on is making sure that we get to Ukraine the systems that they can use now and use effectively,” Blinken said. “At the same time, we’re looking at other systems — some of them larger, more sophisticated — that may be useful and important going forward, but where, for example, Ukrainians need to be trained, because some of these systems, you can’t just turn them over and have them be used immediately.”