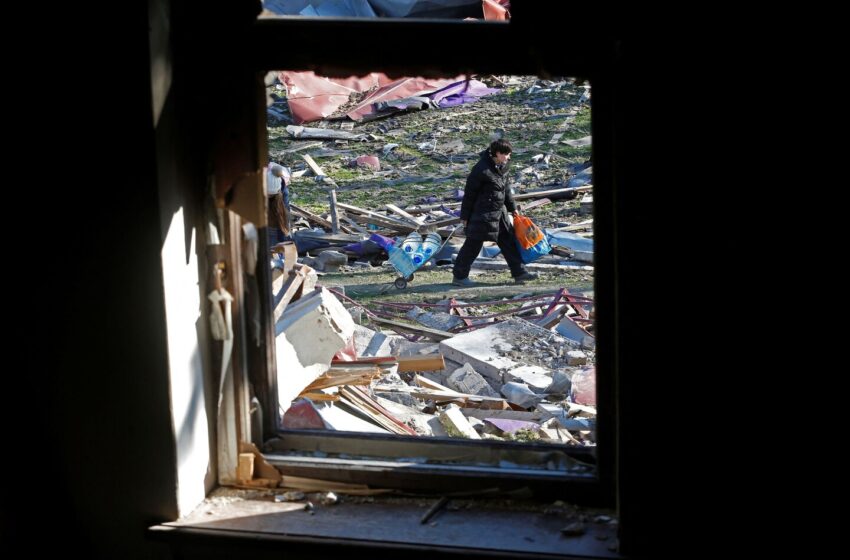 The U.N. General Assembly voted 93 to 24 on Thursday, with 58 abstentions, in favor of a resolution suspending Russia out of “grave concern” over reports of “gross and systematic violations and abuses of human rights.” It was only the second suspension in the 47-member council’s history, following the ouster of Libya in 2011.

Ukraine is pleading for urgent weapons transfers as Russia sets its sights on the east after failing to seize the capital, Kyiv. Airstrikes continued Thursday, Ukrainian officials said, with Russia seemingly undeterred as its pariah status deepened with a new round of sanctions and expelled diplomats.

NATO members agreed to “further strengthen and sustain our support to Ukraine,” Secretary General Jens Stoltenberg said after a meeting of the alliance’s foreign ministers. Declining to give specifics, Stoltenberg said NATO is providing both Soviet-era and modern systems in preparation for “a long haul” in Ukraine.

Secretary of State Antony Blinken told reporters after the meeting that, “we’re looking day in and day out at what we believe they most need, to include new systems that have not heretofore been provided.”

Biden at war: Inside a deliberate yet impulsive strategy

Ukrainian officials welcomed the support but expressed concern that the assistance will be too little, too late. Foreign Minister Dmytro Kuleba criticized Western leaders for tightening sanctions “only after seeing images of Bucha,” the Kyiv suburb where the bodies of civilians were scattered in the streets or dumped in mass graves — in some cases, showing signs of torture — after Russian troops retreated.

“How many children, women, men have to die — innocent lives have to be lost?” Kuleba asked.

Several U.N. member nations invoked those killings in explaining their votes to suspend Russia from the rights council. Linda Thomas-Greenfield, the U.S. ambassador to the United Nations, called for the expulsion earlier this week, saying Russia’s continuing participation was a “farce.”

Russian diplomats dismissed the vote as “human rights colonialism” and a power flex by the United States at the expense of smaller nations. Without providing evidence, Russia has blamed atrocities on Ukrainian troops.

On the ground, however, there was no ambiguity about the civilian toll in the Russian invasion.

“It was hell on Earth,” said Oleg Yevtushenko, 55, a resident of an apartment block in Bucha that the soldiers took over as a base.

Traffic stretched for miles around Bucha on Thursday as thousands of displaced families attempted to return, terrified of what they might find. Passengers looked anxious. On several occasions, traffic police shot into the air to force drivers to give way.

Some families said they wanted to visit their houses, or pets. Others said they were going to check on elderly relatives who had been unwilling or unable to flee with them.

In town, investigators combed the streets for evidence of war crimes. Reporters saw at least six bodies in the back of a pickup truck operated by volunteers. Residents pointed to shallow graves containing the bodies of civilians. A 6-year-old set a small carton of juice at the base of his mother’s headstone.

Bucha was included in a report from Amnesty International that contains testimony from people in Ukraine who say they witnessed Russian forces executing civilians near Kyiv in what the human rights nonprofit organization called “apparent war crimes” that must be investigated.

The testimonies, collected in villages and towns near Kyiv including Bucha, Vorzel, Hostomel and Bohdanivka, reveal “that unarmed civilians in Ukraine are being killed in their homes and streets in acts of unspeakable cruelty and shocking brutality,” Agnès Callamard, the secretary general of Amnesty International, wrote in the report. “These deaths must be thoroughly investigated, and those responsible must be prosecuted, including up the chain of command.”

In one particularly shocking account, a woman told Amnesty investigators that two Russian soldiers killed her husband and “repeatedly raped her at gunpoint while her young son hid in a boiler room nearby.” The woman and her son were later able to escape their village east of Kyiv, Amnesty said.

Other witnesses said they saw or heard of Russian armed forces shooting unarmed civilians — in one case, while the person was looking over a fence, in another, for not having cigarettes.

Bolstering those accounts, Germany’s foreign intelligence service claims to have intercepted radio communications in which Russian soldiers discuss carrying out indiscriminate killings in Ukraine. In two separate communications, soldiers described how they question Ukrainian troops as well as civilians and then shoot them, according to an intelligence official familiar with the findings who spoke on the condition of anonymity because of the matter’s sensitivity.

The findings, first reported by the German magazine Der Spiegel and confirmed Thursday by three people briefed on the information, further undermine Russia’s denials of involvement in the killings. Russia has claimed that atrocities are being carried out only after its soldiers leave occupied areas or that scenes of massacres of civilians are “staged.”

Germany has satellite images that point to Russia’s involvement in the killing of civilians in Bucha, the intelligence official said, but the radio transmissions have not been linked to that location.

Ukrainian officials reported intensified Russian attacks Thursday on cities and towns in eastern Ukraine, where thousands are fleeing amid warnings of a looming offensive. Russian troops appeared to have shifted their operations to that swath of Ukraine after retreating from areas around Kyiv and the northern city of Chernihiv.

The governor of the Kharkiv region, Oleh Synyehubov, said on Telegram that artillery and mortar fire hit houses and infrastructure and that at least 15,000 people have fled towns in the region. He called on residents to leave two areas near territory under the control of pro-Russian separatists.

Three trains meant to carry Ukrainians to safety were blocked by a Russian airstrike on a railway overpass. Officials said the attack occurred Thursday near Barvinkove station — the only Ukrainian-controlled exit from Slovyansk, Kramatorsk and Lyman, cities in Donetsk province. There was no immediate information on deaths and injuries, Alexander Kamyshin, the board chairman of the state-owned railroad company Ukrzaliznytsia, wrote on Telegram.

Local leaders in Donetsk and Luhansk said evacuations were taking place — but under worsening conditions. “I once again emphasize, please evacuate while there are trains available,” Serhiy Haidai, the governor of the Luhansk region, pleaded in a Telegram post. “It is becoming increasingly difficult to save civilian lives.”

Ukrainian military officials said the wholesale destruction of towns and villages seems to be a deliberate strategy as Russia seeks control of Donetsk and Luhansk, which make up the eastern Ukrainian region known as the Donbas.

Ukrainian and Russian officials gave conflicting statements about the status of Mariupol, the port city in southeastern Ukraine that has been under siege for weeks.

Alexei Arestovich, an adviser to President Volodymyr Zelensky, said in a news briefing that while Russia has “renewed its offensive against Mariupol,” Ukrainian forces “are holding on, however difficult it is for them there.” But Eduard Basurin, a spokesman for the self-declared, pro-Moscow Donetsk People’s Republic, claimed that Ukrainian forces have been cleared out of the city center. He said the fighting there is mostly over but that pockets of resistance remain.

Defense Secretary Lloyd Austin said the United States is providing Ukraine with intelligence to help it fight Russia in the Donbas as Moscow concentrates its forces there.

The European Union, meanwhile, approved a plan to phase out imports of Russian coal. The coal ban, which will take full effect in mid-August, is the fifth sanctions package against Russia to be adopted by the E.U. Though Ukrainian leaders have urged Western allies to do more to stem the flow of money to Russia, Thursday’s vote applies only to coal and does not ban other Russian energy imports such as natural gas and oil.

In an unusually candid acknowledgment, Kremlin spokesman Dmitry Peskov said Russia had suffered “significant losses of troops” in its battles in Ukraine, despite past proclamations of success in the invasion. “It’s a huge tragedy for us,” he told Sky News.

Although Moscow has not detailed its losses, a senior NATO military official estimated last month that 7,000 to 15,000 Russian troops were killed in the first four weeks of fighting.

Also Thursday, Russian newspaper editor and Nobel Peace Prize winner Dmitry Muratov was attacked on a train, doused with a paint and acetone mixture that left his eyes burning, his newspaper said.

The attack came just days after Muratov was forced to suspend operations of Novaya Gazeta after receiving a second warning from Russian authorities.

The editor, who was on a train from Moscow to Samara, said the assailant shouted, “Muratov, here’s one for our boys!” as he threw the liquid.

The 60-year-old dean of Russian journalism spent decades leading Novaya Gazeta, which became known for its trailblazing investigative coverage. In recent weeks, punitive new censorship laws in Russia prompted many journalists to flee the country out of concern they could be arrested for reporting basic facts about the invasion of Ukraine.