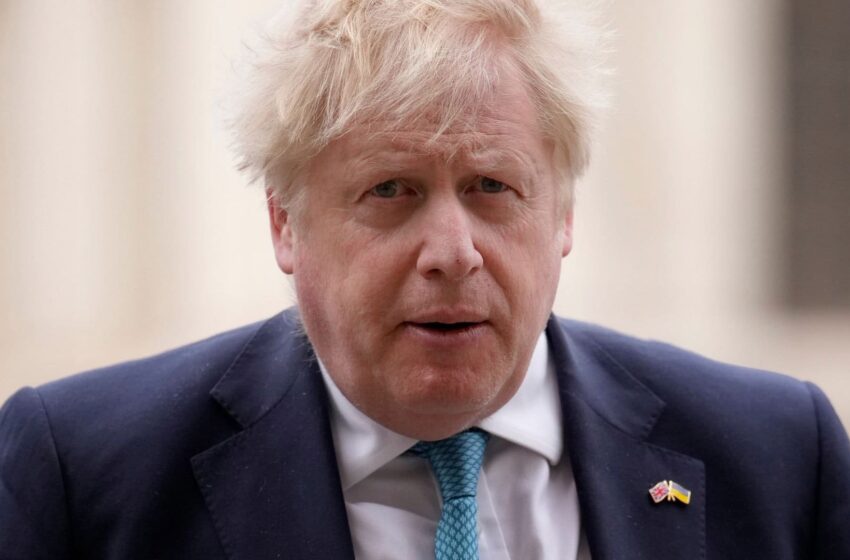 British Prime Minister Boris Johnson has refused to resign after being fined for breaking his government’s pandemic lockdown rules, saying he would instead redouble his efforts to strengthen the economy and combat Russian aggression in Ukraine.

London police fined Johnson and other people Tuesday for attending a birthday party thrown for the prime minister at his Downing Street offices on June 19, 2020. The penalty made Johnson the first British prime minister ever found to have broken the law while in office.

Gatherings of more than two people were banned in Britain at the time of the birthday party to curb the spread of COVID-19.

“I understand the anger that many will feel that I, myself, fell short when it came to observing the very rules which the government I lead had introduced to protect the public. And I accept in all sincerity that people had the right to expect better,” Johnson said late Tuesday. “And now I feel an even greater sense of obligation to deliver on the priorities of the British people.”

The fine followed a police investigation and months of questions about lockdown-breaking parties at government offices, which Johnson had tried to bat away by saying there were no parties and that he believed no rules were broken.

U.K. Prime Minister Boris Johnson has paid a fine and apologized for attending a birthday party in June 2020, breaking his own government’s rules that banned indoor gatherings at the time. It’s unlikely he’ll resign, despite facing renewed calls to do so. 2:08

Opposition lawmakers demanded Johnson’s resignation, arguing the fines given to him and Treasury chief Rishi Sunak were evidence of “criminality” at the heart of government. The opposition argued that the Downing Street gathering demonstrated that Johnson and his supporters believed the rules don’t apply to them.

On Wednesday, a Conservative member of the House of Lords resigned from his role as justice minister, criticizing “repeated rule-breaking and breaches of criminal law in Downing Street.”

“It is not just a question of what happened in Downing Street, or your own conduct,” David Wolfson wrote in a letter to Johnson. “It is also, and perhaps more so, the official response to what took place.”

Johnson’s government was shaken by public anger over revelations that his staff held “bring your own booze” office parties, birthday celebrations and “wine time Fridays” in 2020 and 2021 while millions in Britain were barred from meeting with friends and family because of his government’s COVID-19 restrictions.

Downing Street said Johnson was being sanctioned for attending a “gathering of two or more people indoors in the Cabinet Room at 10 Downing Street” on June 19, 2020. The event was a surprise birthday party for the prime minister.

Johnson said the gathering lasted “less than 10 minutes,” and “at that time, it did not occur to me this might have been a breach of the rules.”

While the “partygate” scandal poses a threat to Johnson’s government, the world has changed tremendously since the first reports of the parties surfaced late last year.

Johnson has been a leading figure in marshaling international opposition to Russia’s invasion of Ukraine, and Britain is facing its worst cost-of-living crisis since the 1950s. His supporters are already arguing that whatever the prime minister may have done wrong, now is not time for a leadership contest.

That his Treasury chief also received an undermining fine helps Johnson, since Sunak had been seen as the leading Conservative candidate to succeed Johnson.

But Johnson still faces the possibility of additional fines. He is reported to have attended three other gatherings that the Metropolitan Police Service is still investigating.

He will also have to answer questions about whether he knowingly misled Parliament with his previous statements about the parties, said Jill Rutter, a senior fellow at the Institute for Government in London.

“Governments have to realize that they can’t just make laws and then skirt around them and rationalize themselves that it’s all OK because they’re very important people working at the centre of government,” Rutter said.