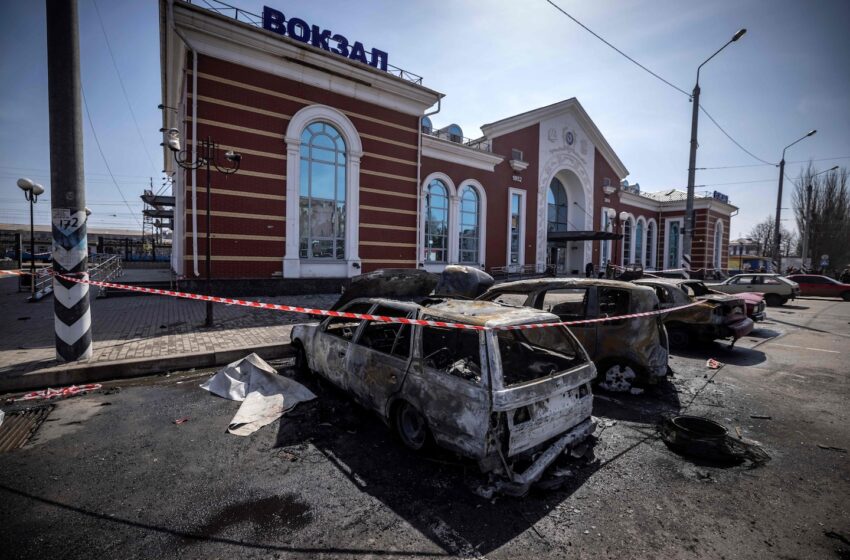 KRAMATORSK, Ukraine — More than 30 people were killed and over 100 injured Friday at the Kramatorsk train station in eastern Ukraine, according to Ukrainian officials, in what they said was a Russian missile attack while hundreds of evacuees were waiting to escape a looming Russian offensive in the area.

Washington Post reporters who arrived at the station in the eastern Donetsk region moments after the attack counted at least 20 dead amid the destruction.

Ukrainian President Volodymyr Zelensky said in a Telegram post that police and rescuers were at the scene and that at least 30 people were killed and that 100 were injured “to varying degrees.”

“Lacking the strength and courage to stand up to us on the battlefield, they are cynically destroying the civilian population. This is an evil that has no limits,” Zelensky said, blaming Russia for the attack.

The chairman of the Ukrainian Railways operator, Alexander Kamyshin, wrote on Telegram that more than 30 people were killed in what he said was a deliberate strike on passenger infrastructure. The railway operator said two missiles struck the station and that details were still being clarified. The Kramatorsk police said the station was struck by Russian ballistic missiles.

Russia denied any involvement in the attack, calling Ukrainian officials’ accusations “absolutely untrue.” Russia’s Defense Ministry said in a statement Friday: “The Russian armed forces did not have any fire missions on April 8 in the city of Kramatorsk, and none were planned.” It claimed that weapons fragments found near the station were from weapons “used only by the Ukrainian armed forces.”

Kremlin spokesman Dmitry Peskov also told reporters Friday that Russia’s military has “no combat missions in Kramatorsk” and denied any involvement in the attack.

Eduard Basurin, a pro-Russian separatist commander in the Donetsk region, charged that the Ukrainian military organized a “provocation” at the railway station and was responsible for the incident, Russia’s RIA Novosti news agency reported.

Several eyewitnesses at the scene told Washington Post reporters that nearly 1,000 people were gathered at the station, most of them evacuees fleeing the Russian invasion, as fighting intensifies in the region.

Reporters counted at least 20 bodies covered in green tarps outside the station. A large missile fragment with the phrase “For the children” spray-painted on its side in Russian was also visible, less than 300 yards from station entrance.

The head of the Donetsk regional administration wrote on Telegram that thousands of people were at the railway station trying to flee the area while it was still relatively safe to do so, as Russian troops reposition away from the north and focus on the east and south of Ukraine.

“Police and rescuers working in the city are reporting dozens of dead and injured people,” said Pavlo Kyrylenko. “Thousands of people were at the station during the missile strike, as residents of the Donetsk region are being evacuated to safer regions of Ukraine.”

Kyrylenko shared graphic images of bodies in the station and piles of luggage strewn nearby, as well as firefighters heading into the station serving Kramatorsk, which has a population of almost 160,000. The Donetsk regional chief accused Russian forces of deliberately targeting civilians attempting to flee, writing: “They want to destroy everything Ukrainian.”

“I strongly condemn this morning’s indiscriminate attack against a train station in #Kramatorsk by Russia, which killed dozens of people and left many more wounded,” he said. “This is yet another attempt to close escape routes for those fleeing this unjustified war.”

I strongly condemn this morning’s indiscriminate attack against a train station in #Kramatorsk by Russia, which killed dozens of people and left many more wounded. This is yet another attempt to close escape routes for those fleeing this unjustified war and cause human suffering

Suliman reported from London and Ilyushina from Riga, Latvia. Annabelle Chapman in Paris contributed to this report.