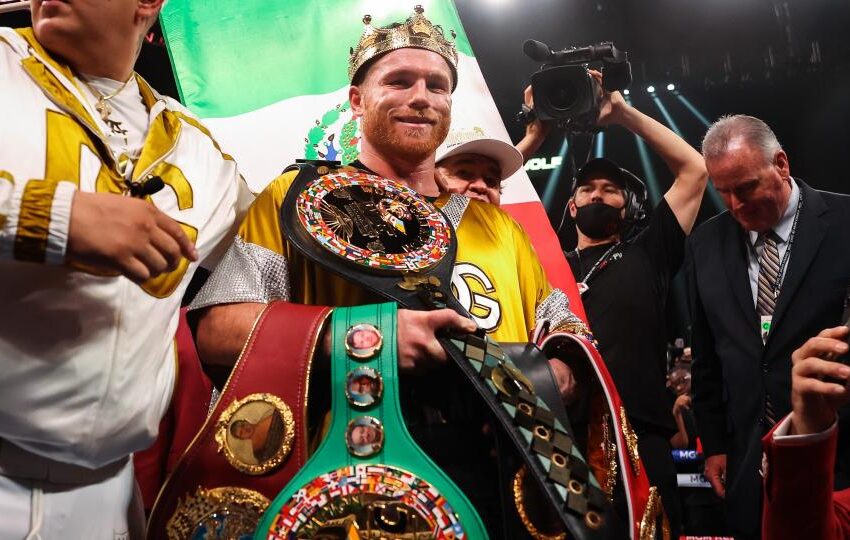 Top 10 middleweights of all time: Where do Gennadiy Golovkin and Canelo Alvarez rank among the greats at 160lbs?

Gennadiy Golovkin returns to action on Saturday, April 9 when he puts his IBF and IBO middleweight titles on the line against Japan’s WBA champion Ryota Murata in Saitama.

The huge, looming sub-plot within this fight is a third showdown with Mexico’s pound-for-pound king Saul “Canelo” Alvarez this September. That is, providing Golovkin takes care of business and Canelo can do the same when he steps up to light-heavyweight to face the undefeated Dmitry Bivol next month.

But there is also the fact that “GGG” will be 40 when he enters the ring this weekend. Whatever happens, we are getting closer to the end of one of the greatest careers the middleweight division has ever seen.

Golovkin has competed for and held middleweight gold since 2010. Where does “GGG” rank compared to middleweight boxers of the past. The Sporting News ranks the finest fighters of all time at 160.

Some readers will be surprised to see Canelo this low. Truthfully, it also would have been very easy to leave him out altogether. The Mexican fighter’s body of work at super-middleweight, where he beat three undefeated champions in his past four fights to become undisputed, already surpasses his resume at middleweight.

Nevertheless, being the man who ended Golovkin’s historic run as champion means he will always be associated in a division where he also has statement wins over Daniel Jacobs and Miguel Cotto. The latter does have the asterisk of coming at a 155lbs catchweight for the WBC title in 2015, as does the highlight reel knockout of Amir Khan the following year. 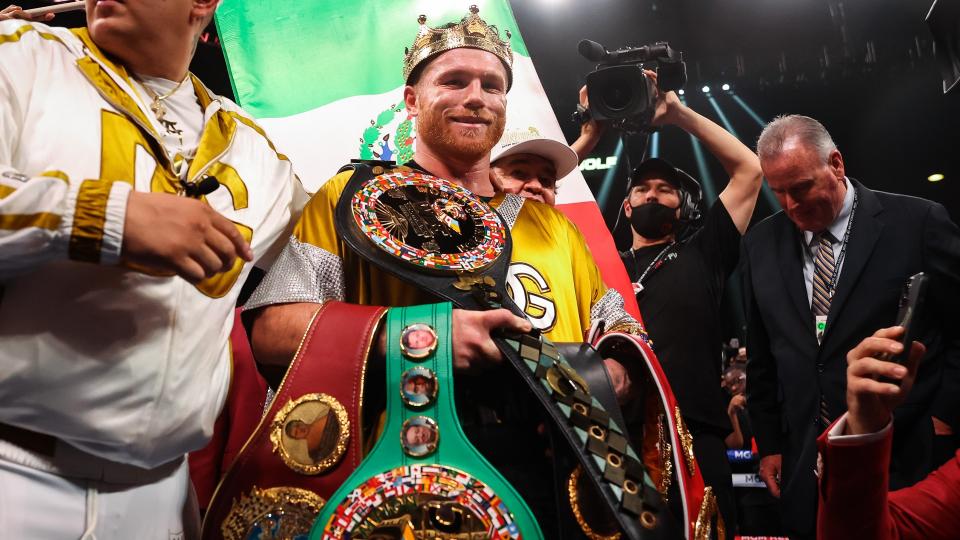 Defined by his rivalry with the great “Sugar” Ray Robinson, La Motta was the first man to defeat a fighter considered by many to be the finest competitor of all time. With the Hollywood film Raging Bull capturing his dark and troubled existence, La Motta was an inimitable presence during a golden era for the middleweight division.

A relentless, come-forward brawler with an incredible chin, La Motta took just as much punishment as he dished out over the course of some incredible contests, and that’s just the Robinson rivalry! He lost five of his six fights with Robinson. It all culminated in the “Saint Valentine’s Day Massacre’” in 1951, where Robinson finally earned a stoppage win. Famously, he didn’t manage to knock La Motta down.

“The Bronx Bull” won the middleweight title in 10 rounds against Marcel Cedran in 1949. His most memorable defense of the crown came the following year when he was behind on the cards and thrillingly stopped Laurent Dauthuille with 13 seconds remaining.

Often remembered as the most avoided fighter of all time, Burley never won the world title. This owed much to the fact he operated in an era when African American fighters were discriminated against when it came to being granted title opportunities, while the advent of World War II provided further complications.

A technically magnificent fighter, Burley’s finest win came over future light-heavyweight great Archie Moore in 1944, who he knocked down four times en route to a lopsided 10-round decision.

“Burley gave me a boxing lesson,” Moore said. “He kept his punches coming at you like a riveting gun beats a tattoo on a rivet.” Moore declared Burley to be the best fighter he ever saw, an assessment with which celebrated trainer Eddie Futch agreed.

Indisputably a modern great, Golovkin might yet have another couple of rungs to climb here. He made 20 defenses of the middleweight crown before dropping a narrow and disputed points loss to Canelo in their second fight. The first 17 defenses were knockout victories.

During his imperial period, Golovkin went almost a decade without going the distance – a 24-fight KO run that ended with an excellent points win over Daniel Jacobs inside Madison Square Garden. A third Canelo fight is likely to take place at 168 pounds but an emphatic victory over his bitter rival remains the missing piece in an incredible career.

READ MORE: Why were both Canelo vs. GGG fights controversial and will they meet in trilogy?

Hopkins loomed over much of Golovkin’s incredible run, given he amassed 20 title defenses between 1995 and 2005. Not always the most attractive fighter to watch, the effectiveness of the evergreen “Executioner” was beyond dispute.

During his reign, Hopkins claimed statement stoppage wins over Felix Trinidad, Oscar De La Hoya, and Glen Johnson, while William Joppy found himself on the receiving end of a masterclass performance in 2003. After two narrow losses to Jermain Taylor ended his title run, Hopkins stepped up to light-heavyweight and continued to confound the odds with his impeccable skills throughout his forties.

The fight would win Ring Magazine’s ‘Upset of the Year’ 👑

It’s hard to go this far back into history and be completely sure of a fighter’s capabilities, but Fitzsimmons’ achievements are too incredible to be ignored. Boxing’s first three-division world champion, 57 of Fitzsimmons’ 61 career victories came via knockout.

His phenomenal punching power allowed him to step up and dethrone heavyweight champion James J. Corbett in 1897. It took more than a century for the feat of a former middleweight champion becoming heavyweight king to be repeated, when Roy Jones Jr. outpointed John Ruiz in 2003.

Greb packed almost 300 fights into a career spanning a mere 13 years between 1913 and 1926, losing only eight times. “The Pittsburgh Windmill” was an all-action, highly skilled fighter and not averse to dirty tactics.

He secured celebrated wins over the likes of Billy Miske, Jeff Smith, Tommy Loughran and Mikey Walker, while Greb was the only man to beat Gene Tunney in the first of their five-fight series.

The greatest of them all, it speaks of Robinson’s incredible abilities that he accomplished all he did at middleweight while on the downslope of his career. “Sugar” Ray was a five-time champion at 160 pounds.

He was vulnerable in a manner he was not during his welterweight days and completed just three successful defenses at middleweight, but that perhaps made this section of his career more compelling. He exchanged victories and defeats with the likes of Gene Fullmer, Carmen Basilio, Randolph Turpin, and La Motta to embellish a truly phenomenal body of work.

#OnThisDay Sugar Ray Robinson rolled back the years for one electrifying burst of power in 1957 to knock out middleweight king Gene Fuller with an inch-perfect left hook to the chin in the fifth round.
Robinson later called the shot “the most perfect punch of my career.”#TBE pic.twitter.com/hd9v1cJwip

A supreme technician in the ring, Monzon combined power and precision to rack up what was then a record 14 successive title defenses in the 1970s. Triumphs over Nico Benvenuti, Emile Griffiths, Jose Napoles, and Rodrigo Valdes saw him ride off into his career sunset victorious, retiring with a magnificent record of 87-3-9.

“Monzon is the complete fighter. He can box, he can hit, he can think, and he is game all the way,” Muhammad Ali’s trainer Angelo Dundee said of the Argentinian hero.

Yet Monzon’s life outside the ring provides a dark coda and makes him a tough man to celebrate. After a history of domestic violence, he was jailed for killing his partner Alicia Muniz in 1989. While released on furlough in 1995, he ended up dying in a car crash.

It’s one of boxing’s tantalizing “what ifs…” that Hagler’s era of dominance did not overlap with Monzon. “Marvelous” had to bide his time for shot at the middleweight crown. He appeared to have scaled the mountain with an excellent display against Vito Antuofermo, only for a controversial split decision draw to be announced in Las Vegas in 1979.

Hagler brutally put things beyond doubt by battering Alan Minter in three bloody London rounds the following year to lift the WBC and WBA titles. That was the first of eight stoppages in a row before Hagler outpointed fellow great Roberto Duran. Three fights down the line in 1985 came the all-time classic of improbable violence and bad intentions against Tommy Hearns. That fight left “Hitman” groggy and defeated inside three rounds.

A fine win over the excellent John Mugabi followed before the last of the “Four Kings” stepped up to dethrone Hagler. “Sugar” Ray Leonard earned a split decision win in a fight that remains disputed to this day. With that, Hagler walked away from the sport.