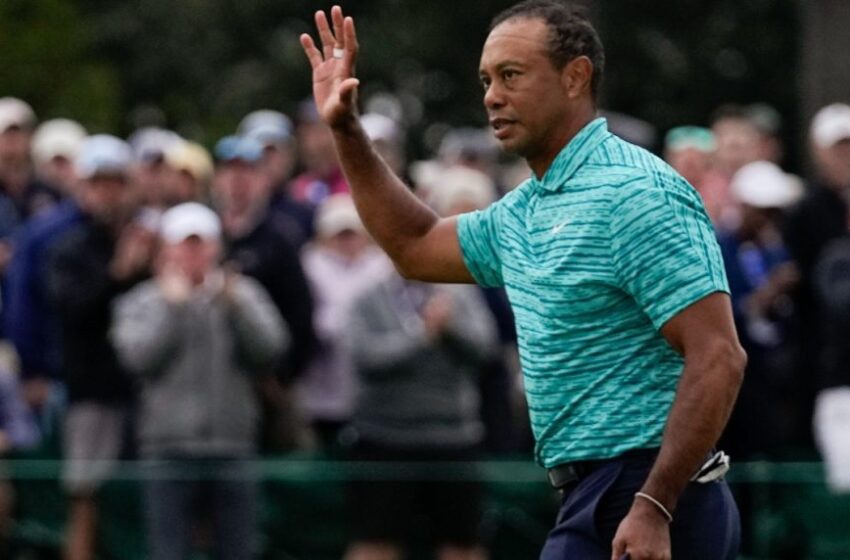 AUGUSTA, Ga. (AP) — Tiger Woods’ second round at the Masters on Friday seemed like a constant ride from one end of the success spectrum to the other, his fortunes changing at an almost dizzying pace during one stretch of the afternoon.

Not his best, not his worst, but plenty good enough, especially considering what he’s been through in the 14 or so months since the car crash that almost cost him his right leg.

Playing in his first competitive event against tour pros in almost 18 months, Woods’ comeback appearance at the Masters will stretch into the weekend. His round of 2-over 74 on Friday left him at 1 over for the tournament and tied for 19th place — though nine shots behind runaway leader Scottie Scheffler.

“Made the cut on one leg,” caddie Joe LaCava said afterward, while Woods was signing his card and preparing for a post-round visit to Butler Cabin. “Wasn’t so bad, was it?”

LaCava was offering the proper perspective. Any golf that Woods plays for the rest of his life will basically be a bonus. The Old Tiger would have hated a day where he had four birdies and six bogeys at Augusta National. The New Tiger certainly didn’t celebrate the way his scorecard looked as the sun started to fall over the Masters on Friday night, but he accepted where he was.

“It was a good fight,” Woods said. “I got back in the ballgame. I’m four shots back of second.”

The day turned into a bit of a salvage operation after four bogeys in his first five holes.

The topsy-turvy, good-bad, wildly fluctuating part of the day started with a birdie on the par-5 8th, followed by a disappointing par on the par-4 9th when his approach from 143 yards went so far right that he dropped his 9-iron on the follow-through. That was followed by perhaps his gutsiest shot of the round, his second at the downhill par-4 10th, when he went at the pin, stuck his approach from just outside of 200 yards and made one of only 10 sub-par scores that hole yielded all day.

“I could have easily kicked myself out of the tournament today, but I kept myself in it,” Woods said.

Woods got to Augusta National on Sunday. He wouldn’t say when the last time was that he played this much golf in a weeklong period — “It’s been years,” was all he would offer — and he’s made no secret that his rebuilt leg and fused back are never going to be the way they once were.

The scoreboard says his position isn’t ideal, since trailing 18 other players with 36 holes left could never be called ideal.

His history, however, suggests it’s not as damning as it might look. Over his last 18 appearances at the Masters, Woods has moved up on the weekend 13 times. “Light bulb moments,” he calls them.

He’s made weekend moves that saw him finish four rounds at least 11 places up the leaderboard than he was after two rounds a half-dozen times. And frankly, in some of the years where he didn’t make a big weekend move, he didn’t have that far to climb anyway — since he was already near the top of the standings.

“I’m proud of the fact that my whole team got me into this position,” Woods said. “We worked hard to get me here to where I had an opportunity and then not to have, as I said, any setbacks this week, and we haven’t. Kept progressing.”