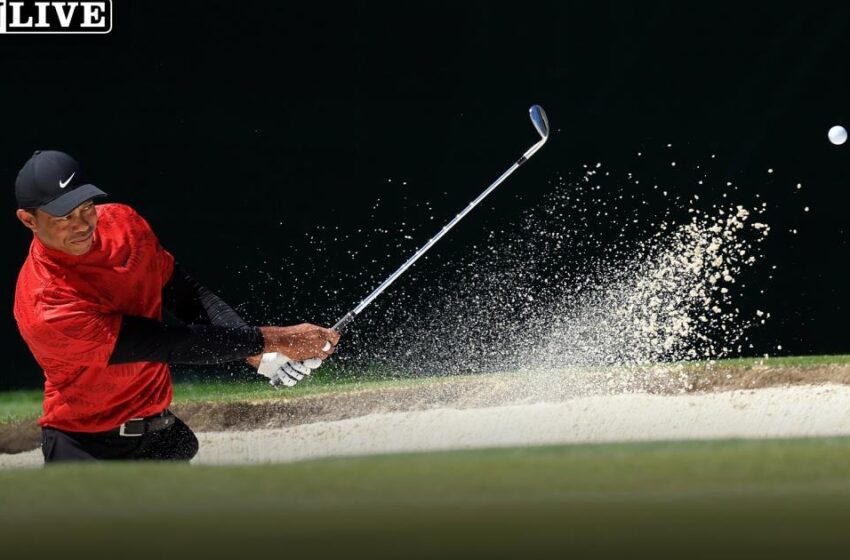 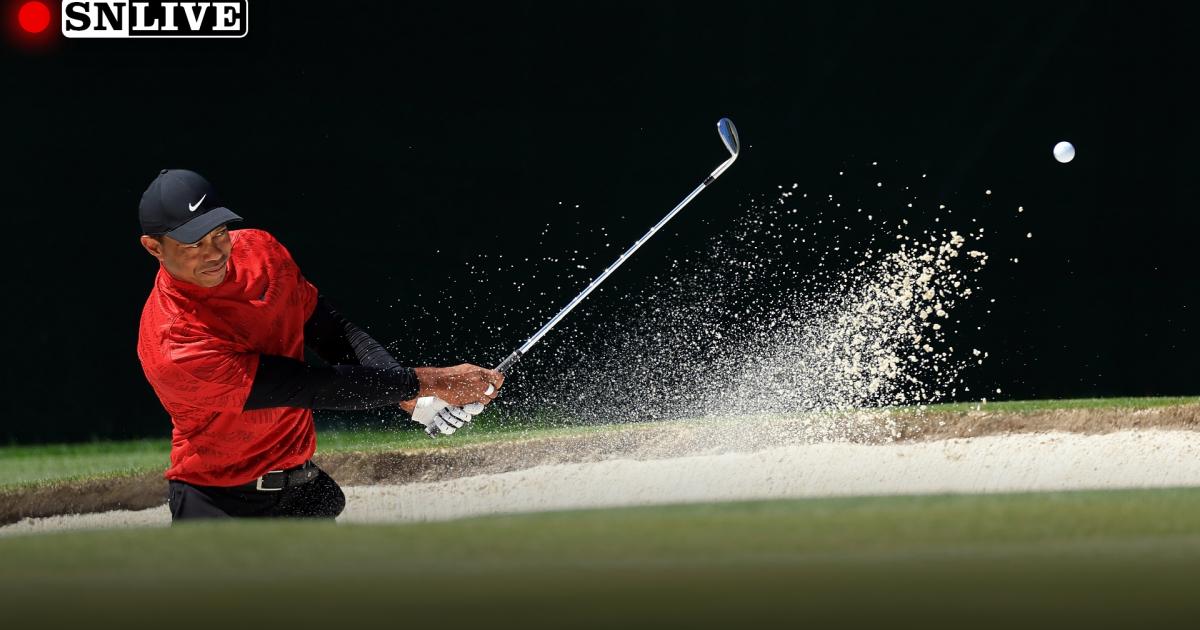 Tiger Woods’ weekend at Augusta may not have ended up where he wanted score-wise, but his embattled return was one to remember.

As Woods lumbered up and down the course at The Masters on Sunday, the grueling weekend clearly weighing on his body, he was often grimacing and expressing frustration. However, at the 16th hole we had an apparent moment of reflection for Woods. As he approached the green, Woods was letting a rare smile slip through. It was fitting, as the broadcast was recalling his famous chip in on 16 in 2005. And it was a reminder of how far he’s come since then.

Woods may not be the dominant force of nature he once was, but despite what Woods said about his goals the 2022 Masters wasn’t about recapturing the magic of his 2019 win. It was about returning and playing, and Woods not only played, he managed to make the cut and play the entire weekend. Even toward the bottom of the remaining leaderboard on Sunday, all eyes were on Woods as they waited for a magic moment.

That moment never truly came, as he hit sensational drive after sensational drive but struggled in his short game. As the day wound down, it was easier to see some emotions slip through Woods’ unflappable demeanor. A smile on 16, a break on 18. It wasn’t much, but the gallery’s reaction to Woods was enough. Him playing the entire weekend was something special for everyone present, no matter what his final score was.

Woods finished 6 over for the day on Sunday, shooting a 78 and capping his final tournament score at 301, 11 over. He left the course tied for 47th in the standings. Although he never seemed to find a rhythm in his putter, some signs of his old game were there. As Woods continues to recover and build his stamina, the hope around the golf world is that this was a prelude and Woods, 46, will be able to play in more pro events in the near future.

Tiger’s final drive of the weekend continues the trend of the day, as he plants it on the right side of the fairway and follows up with a phenomenal iron shot onto the green. He will now try make birdie on his final hole at The Masters, although putting has been a bugaboo all day. Tiger’s putt for birdie stays to the left of the hole once again, and he finishes his weekend with par. He shoots 6 over for the day, and 13 over for the weekend.

Tiger’s first shot on 17 lands to the left of the fairway once again, landing next to a tree. For his second shot, Woods shoots a low line drive off the straw to put himself within striking distance of par on the par 4 17th. Tiger’s third shot from the gallery puts him 37 feet from the hole for par, but takes three puts to sink it for a double bogey on the penultimate hole.

The famous Hole 16 starts well for Tiger, as he puts a terrific shot onto the green. Woods lets a smile come through as he walks to the green on 16 to applause from the gallery. Once again, Woods’ birdie putt stays to the right of the hole and he’s forced to settle for par.

Woods recovers his driving prowess on 15 with a shot down the left side of the fairway with minimal curve. He gives himself a good look at the green for his second shot. He lays up in front of the creek on his second shot, giving himself a reasonable chance for a birdie on the par 5 15th. Woods is seeking his second birdie of the day and his first since the second hole.

Tiger gives himself a reasonable shot for a birdie on this third shot, putting a really nice shot over the creek onto the green. He’ll look to nullify his bogey on the previous hole with a birdie on this one to follow up his terrific putt to end the 14th. Woods’ birdie putt barely misses, forcing him to settle for par after a good approach to the hole.

Tiger opens the 14th hole with a drive into the gallery on the right side. The 305-yard drive leaves him about 160 yards from the pin, and he’ll have to shoot through the trees to get there. Woods lays his second shot up on the fairway, keeping the apex of his shot low to avoid the tree cover. With a good third shot, he can put himself in position to save par for the fourth hole in a row.

His frustrations continue on the third shot, as he shoots well to the left of the hole at the back of the green. Woods stands with his hands on hips after seeing the lie, clearly flustered by the result. His first putt stays to the right of the hole and just continues to roll for a brutal bogey shot. This shot won’t be any easier than the previous one for Woods, as he shoots uphill. Somehow Woods is able to sink it with an incredible putt, getting a big cheer from the crowd and even adding some skip in his step to recover his ball.

Tiger rounds out the Amen Corner with a good drive 265-yards down the fairway, giving himself a good sightline to the pin once again. It’s hard to overstate how good his long game has been today, it’s the ensuing shots that have given him trouble. His second shot continues the trend, as he overshoots the green. His third shot will have to be clean if he’s going to have a chance to improve his score on the day. Woods does a nice job chipping out of the straw in an impossible situation, shooting left-handed just to give himself a chance to two-putt and potentially save par.

Woods puts the following putt past the cup within striking distance, but he has struggled from this 10-20-foot distance today. Woods breaks the curse however, successfully saving par after that disastrous second shot.

The 12th hole hasn’t been a problem for Tiger this weekend, as his first shot keeps him on pace to stay even for the tournament. A beautiful shot puts him between all the hazards onto the green, and a good approach would put him in position to keep par. Woods puts a beautiful long-putt less than 10 feet from the hole, keeping himself on pace to save par. He does so on the three-foot follow up putt, staying at 3 over for the day.

Woods starts the 11th hole with another excellent drive, this one on the left side of the fairway with a sightline to the beginning of the Amen Corner. He follows up his 326-yard drive with a chip just short of the bunker on the right side of the green. Woods is conservative on his third shot, chipping his way onto the green and leaving himself a difficult putt to save par. This has been a weak point of his game today. Woods once against overshoots the 15-foot putt, as his struggles in the short game continue. He puts in the second putt to end up with a bogey heading into the difficult 12th hole.

Tiger begins the back nine with a shot to the left of the fairway into the straw, one of his first poor drives of the day. The 253-yard drive leaves Woods 237 yards from the pin, and he has some work to do on this difficult Par 4. On his second shot, Woods pitches himself back onto the fairway and makes some progress, before a beautiful third shot puts him in striking distance to save par. He hits the five-footer to save an absolutely incredible par given how the hole started for him.

On the 460-yard par 4, Woods lands a day-best 358-yard drive on the fairway. He hugs the forest and gives himself a clear sightline to the green for his second shot, which he puts on 27 feet from the hole. Woods two-putts to save par and finish 2 over for the first nine.

Another strong drive from Woods puts himself in striking distance once again. Just under 300 yards and successfully navigating the fairway away from the bunker, Woods’ second shot lands to the right of the green, about 50 yards from the pin. Despite an excellent third-shot approach that leaves him eight feet from the cup, Woods once again two-putts to save par and stay at 2 over for the day.

Woods’ seventh hole plays to his strengths again, with an excellent 324-yard drive just to the right of the fairway. He finds himself just 122 yards from the pin, but once again his approach lets him down. Woods lands in the bunker for the second time in this round, but he’s able to save par with an excellent shot out of the sand and a nice and easy four-foot putt.

Tiger begins the Par 3 sixth hole with a shot just in front of the gallery to the right of the green, followed by a chip onto the green 11 feet from the cup. Woods’ putting struggles continue, however, as he two-putts for the third straight hole, resulting in his third straight bogey and putting him at 2 over for the day.

Woods’ drive gets the fifth hole off to a good start, as he puts himself right around some inconvenient bunkers with a 293-yard drive. He gets the green in sight, but a poor shot brings some uncharacteristic frustration out of Woods. He drops his club as the ball lands short of the green, ultimately nullifying what was an excellent first shot. Woods’ third shot plays the approach on the slope well, but after it rolls past the pin he two-putts again to bogey on the second straight hole.

Tiger’s fourth hole gets off to an inauspicious start, as he plops it into the bunker to the left of the green on a Par 3. Woods’ chip out of the bunker is a good effort, putting himself just 12 feet from the pin. But the difficult putt lands just past the cup, forcing Woods to settle for a bogey on the hole to bring him even for the day.

Woods starts the Par 4 third hole with a lovely drive just in front of the bunker, 320 yards and nestled just 26 yards from the pin. Woods puts a bit too much mustard on his second shot, overshooting the pin and giving himself a difficult 30-foot putt. Woods two-putts to save par once again, staying at 1 under through three holes.

For the second day in a row, the Par 5 second hole is friendly to Tiger. He drives it over the bend to put himself on the fairway within striking distance. On his second shot, Woods lands just past the green between the bunkers bracketing in. He chips himself on on his third shot to put himself in position for birdie, and sinks the putt to complete it and put himself at 1 under early in the day.

Tiger Woods’ first shot lands just to the left of the fairway, nearly 300 yards and just over 150 yards from the pin. Woods follows up with a really nice shot on the pin, but backspin on the ball puts it about 30 feet from the hole. He’ll go on to two-putt to save par to start the day.

Woods is scheduled to begin the final round at 2022 Masters Tournament at 10:50 a.m. ET Sunday. He will be paired with Jon Rahm.

Live coverage of the Masters will begin on CBS starting at 2 p.m. ET. If you want to watch the morning action, you will have to head over to Masters.com.

Paramount+ and ESPN+ will also carry morning action Sunday, in the form of featured groups and featured holes.

You will also be able to stream the Masters using fuboTV, which comes with a free trial.