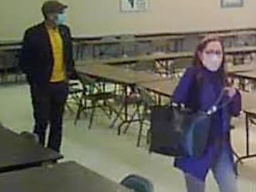 Three fugitives wanted for stealing $500,000 worth of valuables at New York coin show

Three individuals are wanted in Long Island, New York, for stealing $500,000 worth of cash, collectible coins and gold bars at a local coin show on Sunday.

The trio, described by police as an Asian man, an Asian woman and a male getaway driver, are accused of stealing from a vendor at the Melville Coin, Stamp and Collectible Show, which took place on Broadhollow Road.

The vendor, whose identity has not been disclosed, reportedly asked another vendor to look after his items at around 2 p.m. while he went to the restroom.

Suffolk County police said the second vendor was distracted by the woman while her male companion grabbed the absent vendor’s box containing his valuables.

Witnesses said the pair then fled from the venue in a black SUV — likely a Nissan Rogue — driven by a second male accomplice, heading north on Route 110.

The victim said he has sold at the event for years with no incidents.

“I think it’s very sad it’s come to this situation that people do things like that,” he told News 12.

The investigation into the theft is ongoing.

Support our Journalism with a Contribution

Many people might not know this, but despite our large and loyal following which we are immensely grateful for, NextShark is still a small bootstrapped startup that runs on no outside funding or loans.

Everything you see today is built on the backs of warriors who have sacrificed opportunities to help give Asians all over the world a bigger voice.

However, we still face many trials and tribulations in our industry, from figuring out the most sustainable business model for independent media companies to facing the current COVID-19 pandemic decimating advertising revenues across the board.

We hope you consider making a contribution so we can continue to provide you with quality content that informs, educates and inspires the Asian community.
Even a $1 contribution goes a long way. Thank you for everyone’s support. We love you all and can’t appreciate you guys enough.