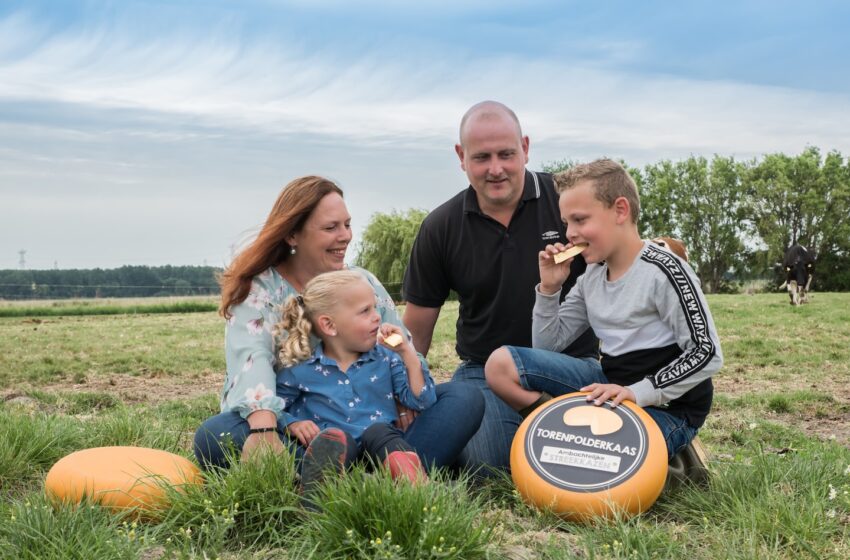 Thieves strike in the Netherlands with heist of $22,000 — in cheese In a rural Dutch town, the day started like any other. The sun’s rays rose over the farming community of Fijnaart. The cows mooed from their stalls, ready to be milked. But inside a dairy farmer’s storage room, there was something missing — 3,500 pounds of it to be exact.

“They stole the cheese,” said Gerda van Dorp, who runs Torenpolderkaas, a dairy farm and cheese business, with her husband, Joost. “I can’t even describe the feeling when you see all those empty shelves.”

A group of thieves pulled off the heist in the dead of the night. How they managed to carry out 161 heavy wheels of Gouda worth over $22,000 on March 29 is a mystery that has stumped people far beyond the town of less than 7,000 residents.

For the past week, van Dorp’s days have been filled answering media requests and doing interviews with outlets across the Netherlands, the United States and Canada — so much so that the dairy farmer said she has struggled to find the time to get back to producing cheese.

“You’ll be the last one,” she told The Washington Post. “That is, unless Oprah comes calling.”

Cheese heists, though unusual, are not unheard of, said Theo Dekker, chairman of Bond van Boerderij-zuivelbereiders, an interest group for Dutch dairy farmers.

“In 2016 there was a burglary wave and in 2020 it happened again,” Dekker said in an email to The Post. “Cheese is a wanted product because it is easy to sell.”

If there’s one thing that unites people worldwide, it’s a love of cheese. The product can be traced back to nearly all cultures and has been present for thousands of years, enabling a steady demand.

But selling the stolen Gouda in the Netherlands could prove tricky for the thieves, since cheese there is marked with a unique code revealing its origin, type and fat content. Dekker’s hunch is that they will attempt to sell it abroad — potentially in Russia, where economic sanctions levied after its attack on Ukraine prevent Dutch dairy from being bought. Unfortunately, that means there’s not much Dutch authorities can do to help van Dorp, especially since her farm had no security cameras to record the culprits.

The ordeal has left van Dorp missing two months of stock. Yet the stolen wheels of cheese are much more than an economic setback for the dairy farmer.

Van Dorp, a mother of two, said cheesemaking is almost like raising a kid: “You give it so much attention, love and care. You put in the effort and then you watch it become a mature, round wheel.”

At Torenpolderkaas, the cheese’s journey from fresh dairy to delicious slice starts on Sundays, when the van Dorps milk some of their 105 cows.

But milk doesn’t turn into cheese on its own. It has to be prepared, acidified, curdled, cut, pressed and drained in a lengthy process that takes almost a whole day, van Dorp said. Next, it gets shaped into its signature round figure and put into a salt bath for one to two days. A week is then spent coating and drying it. Finally, the wheel is placed on a shelf to mature for at least three months, after which it’s ready to go into the belly of a happy customer.

While cheesemaking is a love affair for van Dorp, the toiling doesn’t come without sacrifice. Her children, ages 5 and 10, sometimes wonder why their parents have no days off. Vacations are often cut short, and most days are spent in their sprawling fields.

Van Dorp never imagined that life for herself. Raised near The Hague — a city with over 514,000 residents — she “started laughing so hard” when she realized the dashing man she met during a 2005 vacation in Italy was a farmer.

“I didn’t see myself as a farmer,” she said. “And then I moved in 2008 to a town that basically only has a supermarket, flower shop, drugstore and a restaurant. That’s life — and love.”

Life in Fijnaart — about 75 miles south of Amsterdam — was tranquil until that Tuesday morning, when her husband came running in screaming that the shelves were empty.

It seemed unimaginable in a town so small that such a thing would happen. Their dog had not barked, and they heard no commotion throughout the night. It took van Dorp hours to process the loss — only managing to repeat, “It’s gone, it’s gone, it’s gone,” in a phone call with her mother.

“It was heartbreaking and something that makes you lose your faith in humanity,” she said.

Nevertheless, van Dorp said her family has received supportive texts, phone calls, cards and flowers. Some have been inspired to buy her dairy farm’s products. And a cheesemaker from another town, whom the van Dorps have never met, organized a GoFundMe campaign to help the family.

“This makes you realize that yes, some people are bad,” she said. “But most people are good, honest and have sympathy for you when you need it the most.”