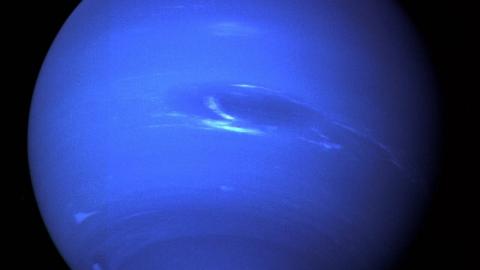 The Forecast on Planet Neptune Is Chilly – And Getting Colder Frigid and far-flung Neptune, our solar system’s outermost planet, is adding to its reputation as an enigmatic world, with astronomers puzzled by a surprising drop in its atmospheric temperatures during the past two decades.

Focusing upon Neptune’s stratosphere – the atmosphere’s relatively stable region above the turbulent weather layer – the researchers had expected to find rising temperatures in the part of the planet visible from Earth with the onset of its southern hemisphere summer, a season lasting four decades. Instead, they found temperatures declining significantly.

The study was based on more than 95 thermal-infrared images – every one ever taken – spanning 2003 to 2020 using ground-based telescopes in Hawaii and Chile, mostly the European Southern Observatory’s Very Large Telescope. It is the most comprehensive assessment to date of Neptune’s atmospheric temperatures.

“The atmosphere appears more complicated than we had naively assumed, which, unsurprisingly, seems to be a general lesson that nature teaches scientists again and again,” said Michael Roman, a postdoctoral researcher at the University of Leicester in England and lead author of the study published on Monday in the Planetary Science Journal.

Neptune’s stratosphere temperature fell as much as 14 degrees Fahrenheit (8 degrees Celsius) to minus 179 F (minus 117 C) over the 17 years studied. In contrast, temperatures in Neptune’s troposphere – the even-colder weather layer – showed no significant variability while reaching as low as minus 370 F (minus 223 C).

Neptune is among the least explored of the solar system’s eight planets, with its great distance making it difficult to study from Earth. NASA’s Voyager 2 is the only spacecraft to have made a close-up visit, flying past Neptune in 1989.

“I think Neptune is very intriguing to many of us because we still know so little about it,” Roman said.

“I suspect the overall temperature drop may most likely be due to changes in the atmospheric chemistry, which responds to changing seasonal sunlight and, in turn, alters how effectively the atmosphere cools,” Roman said.

Neptune’s average diameter is about 30,600 miles (49,250 km), making it four times wider than Earth. It orbits more than 30 times as far away from the sun as Earth at an average distance of about 2.8 billion miles (4.5 billion km), needing about 165 Earth years to complete a single orbit around the sun – a Neptunian year.

The dwarf planet Pluto most of the time orbits even further away but its oval-shaped orbit sometimes brings it closer to the sun than Neptune.

Neptune and neighboring Uranus are classified as ice giants, as opposed to the gas giants Jupiter and Saturn. Neptune, which like those other planets lacks a solid surface, possesses an extremely dynamic atmosphere mainly of hydrogen and helium, with a small amount of methane, atop a mantle mostly of slushy ammonia and water and a solid core. Neptune boasts the strongest winds of any planet.

“The close relationship that Neptune may share with a large segment of the population of exoplanets,” Orton said, “means that it may be ‘an exoplanet in our backyard’ – probably on the colder end of that spectrum, but still a model for the things we might expect to see in the meteorology of various exoplanets.”