Teen’s mom denies Iran claim she was killed by fall, says she died of blows to head

DUBAI, United Arab Emirates — The mother of a 16-year-old Iranian girl has disputed official claims that her daughter fell to her death from a high building, saying the teen was killed by blows to the head as part of the crackdown on anti-hijab protests roiling the country.

Nasreen Shakarami also said authorities kept her daughter Nika’s death a secret for nine days and then snatched the body from a morgue to bury her in a remote area, against the family’s wishes. The bereaved mother spoke in a video message Thursday to Radio Farda, the Persian-language arm of the US-funded station Radio Free Europe/Radio Liberty.

Nika Shakarami has become the latest icon of the protests, seen as the gravest threat to Iran’s ruling elites in years. Attempts by authorities in recent days to portray the teen’s death as an accident could signal concern that the incident could further fuel anger against the government.

The protests, which enter their fourth week Saturday, were sparked by the death of 22-year-old Mahsa Amini in the custody of the morality police. They had detained Amini for alleged violations of the country’s strict Islamic dress code.

Young women have often been leading the protests, tearing off and defiantly waving their headscarves as they call for toppling the government.

The protests quickly spread to communities across Iran and have been met by a harsh government crackdown, including beatings, arrests and killings of demonstrators, as well as internet disruptions. 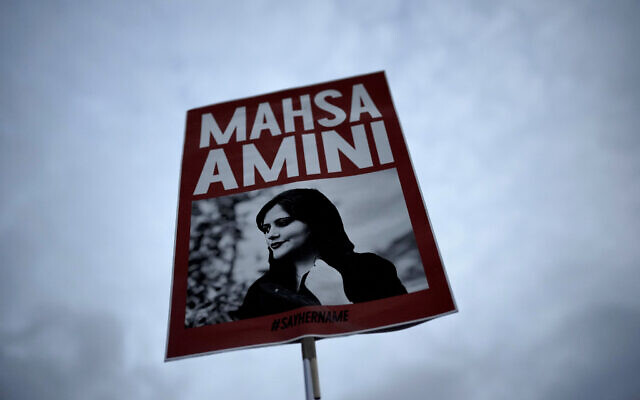 FILE – A woman holds a placard with a picture of Iranian Mahsa Amini as she attends a protest against her death, in Berlin, Germany, Wednesday, Sept. 28, 2022. (AP Photo/Markus Schreiber)

Human rights groups estimate that dozens of protesters have been killed over the past three weeks. On Thursday, the London-based group Amnesty International published its findings about what appears to be the single deadliest incident so far — in the city of Zahedan on Sept. 30.

The report said Iranian security forces killed at least 66 people, including children, and wounded hundreds, after firing live rounds at protesters, bystanders and worshippers in a violent crackdown that day. Iranian authorities claimed the Zahedan violence involved unnamed separatists. More than a dozen people have been killed since then in the area, the report said.

Meanwhile, Nika Shakarami’s mother pushed back against attempts by officials to frame her daughter’s death as an accident.

In her video message, she said that the forensics report showed that Nika had died from repeated blows to the head.

Earlier this week, Iran’s police chief, Gen. Hossein Ashtari, claimed that the teen had gone to a building “and fell from the upper floor at a time of gatherings.” He said that “the fall from that height led to her death.”

Nasreen Shakarami said her daughter left her home in Tehran in the afternoon of Sept. 19 to join anti-hijab protests. She said she was in touch by phone with Nika several times in the next few hours, pleading with her to come home. They last spoke before midnight. “Then Nika’s mobile was off, after she and her friends were shouting names of forces while they were fleeing,” she said.

Nika Shakarami, 17, was arrested during #IranProtests after burning her headscarf. After a week security forces delivered her dead body to her family w/ her nose fully smashed & her skull broken with multiple blows.
Outrage over her murder is now adding fuel to fire of protests. pic.twitter.com/kSv9kKkOCb

The following morning, the family searched for Nika at police stations and prisons, but had no word of her whereabouts for nine days. Authorities finally handed over the body on the 10th day and the family headed to the city of Khoramabad for burial, she said. Authorities repeatedly demanded to take possession of the body, which was in the meantime stored in the Khoramabad morgue.

On the day of the planned funeral the family learned that the body had been snatched from the morgue and was taken to a remote village for burial, under heavy security, Nasreen Shakarami said.

Since the confirmation of her death, Nika has emerged as another icon of the protests, alongside Amini. A photo of Nika, wearing a black T-shirt and sporting a stylish two-tone bob haircut and eyeliner, has been widely circulated on social media.

Authorities arrested Nasreen Shakarami’s brother and sister. The sister, Atash, later said on Iranian TV that her niece fell from a high building.

Nika’s mother said she believes her siblings had been pressured to echo the official version.

Iran has a long history of broadcasting forced confessions.

Also Friday, the official IRNA news agency quoted the coroner’s office saying examinations found that Mahsa Amini died of cerebral hypoxia — in which oxygen supply to the brain decreases. It said she suffered multiple organ failure but “her death was not led by blunt force trauma to the head, organs and vital parts of the body.”

It said Amini suffered heart arrhythmia, hypotension and loss of consciousness before being taken to a hospital.

Amini’s family has previously disputed official accounts of their daughter’s death and its cause while in police custody. The family has said Mahsa Amini’s corpse showed clear signs of being bruised and beaten.