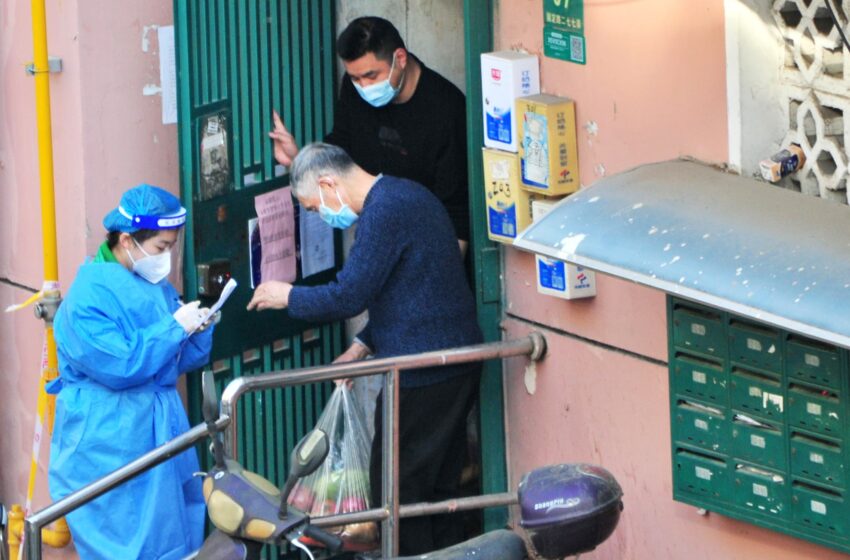 Shanghai, home to the world’s largest container shipping port, began a two-part lockdown on March 28 and has yet to announce when restrictions will lift.

BEIJING — China’s Covid controls have disrupted supply chains and stressed the daily life of workers, primarily in Shanghai and Shenyang, according to a slew of anecdotes from the EU Chamber of Commerce in China.

Mainland China has struggled in the last few weeks to control its worst wave of Covid since the initial shock of the pandemic in early 2020. While swift lockdowns then helped the country control the virus and return to growth, the latest outbreak stems from the more transmissible omicron variant.

Shanghai, home to the world’s largest container shipping port, began a two-part lockdown on March 28 and has yet to announce when restrictions will lift.

She noted that while the port is “technically doing business as usual,” logistics still face challenges from a shortage of truck drivers, who are stuck in lockdowns or in need of frequent negative virus tests.

Shanghai International Port Group said in a statement Saturday that the ability of ships to reach designated spots for unloading or loading cargo was more efficient than it was last year overall. Since March 28, the average wait time for container ships at the port was less than 24 hours, the port said.

“Shanghai is in a kind of state of exception,” said Schoen-Behanzin. “There’s a strong sense of uncertainty throughout the city. It’s fueled by supply shortages, endless lockdowns and a really big fear of being sent to those quarantine camps.”

In an attempt to handle a surge in cases, Shanghai authorities have set up makeshift quarantine centers.

Schoen-Behanzin noted reports that people living in lockdown in the city have had to wake up at 4 a.m. to compete for online vegetable deliveries.

Businesses that do get permission to maintain operations — in food, pharmaceutical or chemical industries — need to keep employees in a bubble around the production facilities, said Schoen-Behanzin.

“We hear more and more that some workers aren’t volunteering anymore since there isn’t [a] clear end in sight and they don’t want to eat and sleep on site,” she said.

Two days after the lockdown lifted, EU Chamber South China chapter Chair Klauz Zenkel said a company he visited still had “many, many foldable beds” — which the business planned to keep on hand because they weren’t sure whether they’d need them again soon.

China’s Ministry of Commerce did not immediately respond to a request for comment.

In the northern Chinese city of Shenyang, locals have remained in a lockdown for more than two weeks, according to the local chapter chair Harald Kumpfert.

He said BMW’s joint venture in the city initially could maintain production, but had to stop after an unspecified time “because the supply chain could not be maintained.”

“Any transportation is stopped on the road,” Kumpfert said. “You would be caught by the police if you are on the road and you don’t have special permission.”

BMW did not respond to a CNBC request for comment.

Volkswagen, which has factories on the outskirts of Shanghai and in a major city of Jilin province — also in lockdown — said the two production sites would remain closed Wednesday and Thursday.

Kumpfert also said anecdotally during Wednesday’s webinar a member company wasn’t able to get a loan because a bank said it was unable to give out loans due to the number of insolvencies and bankruptcies. It was not clear what size of loan or bank was involved.

EU Chamber representatives in the southwest and other parts of China noted some supply chain disruptions but overall less of an impact from Covid on local operations. The chamber noted they did not know what the Covid situation was in rural parts of China.

Citi analysts said Wednesday they see “considerable impact on consumption,” but less on production and investment from the omicron wave in March.

“Although Shanghai and Guangdong province accounted for 7.3% and 23.1% of China’s exports and 14.4% and 18.5% of imports in 2021, we think the impact on trade is controllable: Shanghai’s half-city lockdown started only from March 28, while Dongguan’s and Shenzhen’s was completed within one week,” the analysts said. They expect 4.7% GDP growth in the first quarter, up from a previous forecast of 3.8%.

Last week, a survey of American businesses in China found that 54% of respondents have lowered 2022 revenue projections for the year due to the latest Covid-19 outbreak.

Among manufacturers, more than 80% reported slowed or reduced production, as well as supply chain disruptions. The Beijing-based American Chamber of Commerce in China and its Shanghai counterpart conducted the survey last week.

Shanghai has been a hub for foreign business in the country, partly due to the city’s culture and systems — including a large number of international schools and hospitals.

“Everybody is stunned that this happened to Shanghai. It’s not the middle of Hunan. It’s Shanghai,” said Joerg Wuttke, president of the chamber.

Wuttke estimated the number of foreigners on the mainland has halved since the pandemic began, and could halve again this summer. In all, he expects the total population of Europeans in the country has fallen so sharply they would fit into the Bird’s Nest stadium in Beijing.

The stadium has a permanent capacity of about 80,000 seats.