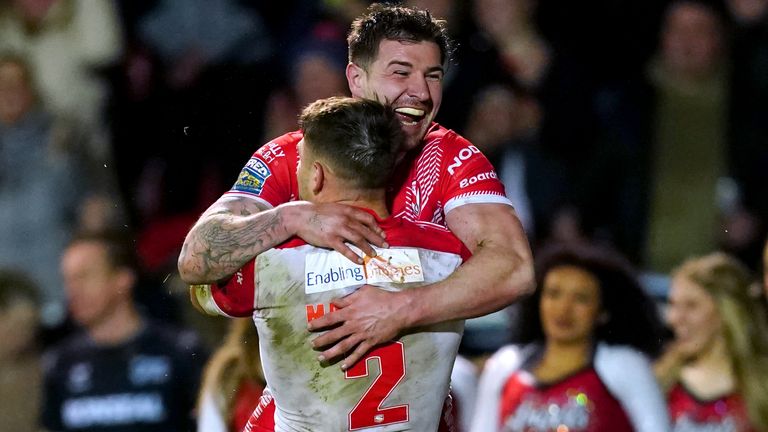 St Helens made sure of their place in the semi-finals of the Betfred Challenge Cup with a convincing 36-20 victory over Catalans Dragons in Perpignan.

The Dragons lost star full-back Sam Tomkins early in the game and his replacement, Arthur Mourgue, was unable to inspire a recovery from a 20-10 half-time deficit.

Catalans were penalised twice early in the game and Tommy Makinson struck the first points with his boot in the fourth minute from in front of the posts.

But St Helens were next to be penalised when Percival went high on Tom Davies and Catalans spun the ball left for Fouad Yaha to continue his try-scoring streak with a touchdown in the left corner.

Saints struck back immediately when Will Hopoate stretched the Dragons on the right and a simple pass inside to supporting full-back Welsby put the visitors back in front at 8-4 with Makinson’s conversion.

Welsby then turned provider for scrum-half Dodd as St Helens tore through Catalans with ease for a 29th-minute try, with Makinson’s conversion pushing them 10 points ahead.

And Percival punched through some paper-light defence on the left to score Saints’ third try in five minutes, Makinson adding his fourth successful conversion for a 20-4 lead.

The game took another turn when Catalans full-back Tomkins had to leave the field injured, but Curtis Sironen was then sin-binned for a high shot on Dragons captain Ben Garcia and Catalans responded immediately with a try for prop forward Gil Dudson, converted by Mourgue.

The reappearance of giant prop Sam Kasiano from the substitutes’ bench seemed to inspire the Dragons as the vocal French crowd sensed a comeback.

Josh Drinkwater was then taken out after he had launched a high kick and Catalans resumed their offensive but Yaha failed to collect a spectacular Mourgue pass to score on the left, leaving it 20-10 at the interval.

Saints scored first in the second half with a short-range strike by Knowles from dummy-half, Makinson skilfully negotiating a strong wind to land the conversion from wide.

But Yaha scorched in for his second try of the game in the 57th minute after a period of pressure from the Dragons, and Mourgue’s touchline conversion put the match back in the balance with 10 points between the teams.

Saints quickly resumed their authority, however, when prop Alex Walmsley created the space for Norman to step easily between the posts and score, before Jonny Lomax put in a killer pass to send Batchelor over the line with just 10 minutes remaining.

Trailing 36-16, the Dragons were facing a mountain to climb and it got steeper when Tyrone May had to leave the field with a facial injury.

Despite a late Davies try, it was not enough against the reigning Challenge Cup holders.