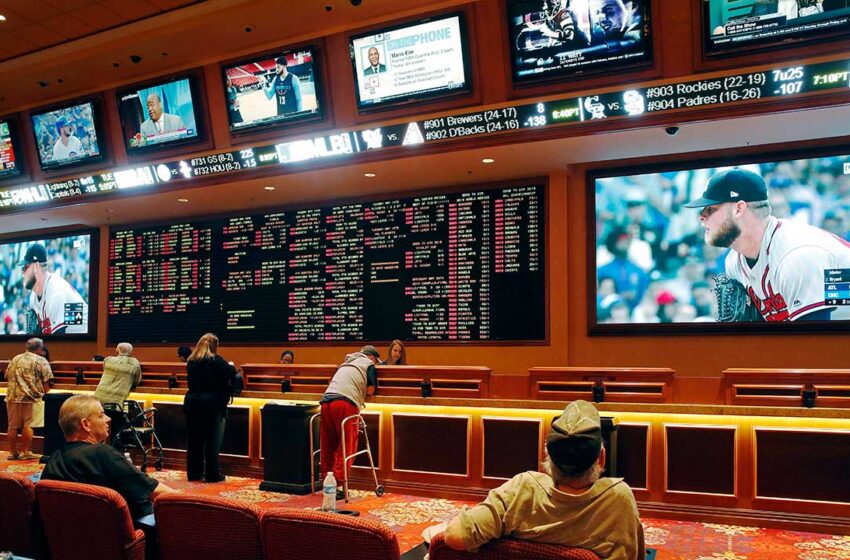 Sports gambling glossary: How to talk the talk when betting

Single-game sports betting has technically been legal in Canada ever since Bill C-218, An Act to amend the Criminal Code (sports betting), was passed in the House of Commons in the summer of 2021.

The first week of April marked Ontario’s foray into legalized single-game sports betting as we continue to enter a new era in how fans can enjoy, consume and participate during live sports.

If you’re new to sports betting terminology, here are some common sports gambling words and phrases to help you better understand the vernacular:

Bet/Wager: When a person risks a sum of money against a sportsbook and that person either loses the money they risked, or they are returned a sum of money larger than what they initially put at stake based off the result of a sporting event.

Bettor: A person who places a bet/wager on a sports competition.

Oddsmaker(s): A person or group of people that sets and adjusts betting lines/odds.

Lines/odds: The numbers used to distinguish the difference between a favourite and an underdog.

Favourite: The team or athlete oddsmakers expect to win the game/match/competition or finish in first place.

Underdog: The team or athlete oddsmakers anticipate will lose the game/match/competition etc. …

Pick ’em: A game/competition where the two competing sides have equal betting odds to win, therefore there is no favourite and no underdog.

Moneyline: A straightforward type of bet where the bettor simply picks one side to win a game/competition. If that side is victorious then the bettor can cash a winning ticket.

American odds and moneyline betting are essentially odds expressed in monetary terms with $100 being the standard betting unit of reference since it is a nice, round number.

Point spread: Unlike moneyline bets, point spreads attempt to handicap a game/competition in order to, in theory, level the playing field from a betting perspective.

ATS: An acronym for Against the Spread used when a bettor places a point-spread wager.

Cover/Cover the spread: A winning outcome on a point spread bet.

Total: Also referred to as the “Over/Under,” a total is the combined number of anything in a sporting event. The total commonly refers to the combined final score of a game, but can also refer to individual or team points, goals, rebounds, wins, saves, hits, rounds, birdies, aces or many other statistical categories depending on the sport. A bettor can choose to bet whether a given category will finish over or under a predetermined total.

Over: When the combined total ends up higher than a sportsbook’s listed total.

Under: When the combined total ends up lower than a sportsbook’s listed total.

Push: A wager that ends as neither a winning nor losing bet. It occurs when the winning margin or total score ends up being the exact number as the listed point spread or total. A push can also occur when there is a tie/draw on a moneyline bet.

Example 1: Orange (-4.0) was favoured to beat Blue (+4.0) by an even four points. Orange won the match by exactly four points, 27-23, which resulted in a push for anyone that placed a wager on either side. … In that same game, the total was set at an even 50.0. Since the final score ended up totalling exactly 50 points, anyone who bet the Over/Under would also receive a push and their original wager would be returned.

Example 2: Boxer A and Boxer B fight to a unanimous draw on the scorecards. Anyone who placed a moneyline bet will have their original amount risked returned to them. However, if a bettor picked either boxer to win via a specific method (KO or decision), a draw would not result in a push. It would be a losing bet because a tie/draw is an option when picking a method of victory.

Puckline/Runline: A point spread of -1.5 or +1.5 in a hockey or baseball game. There are varying moneyline odds attached to puckline/runline bets, depending on whether you bet on the favourite or on the underdog.

Hook: The half-point you see on a point spread. Hooks eliminate the possibility of a push. Point spreads of 2.5 or 3.5, for example, are common in football games since three-point wins are relatively common. When there’s a hook it forces a bettor into a more difficult choice as opposed to giving them a potential out via a push. A point spread of an even 3.0 would mean there is no hook.

Unit(s): The standard amount of money a bettor typically places on a game/competition. Units vary from bettor to bettor. For one bettor, a unit could be $10,000, for another bettor one unit could be $10. There is no correct or incorrect unit amount, however, gamblers are advised to not bet beyond their means.

Opening line/odds: The initial odds listed for a sporting event.

Closing line/odds: The finals odds posted before the start of a sporting event.

Juice: The tax or commission a book takes when accepting bets.

Example: When betting on a coin toss, a bettor is typically offered -110 odds or even -120 odds for both heads and tails, despite it being a 50-50 endeavour. Juice increases the probability that the sportsbook will profit off its customers over time.

Public money: The side of a bet on which the majority of bettors have placed their wager.

Handle: The accumulated sum of money wagered on a given sporting event.

Steam: When one side of a betting line has growing momentum, causing the odds to change.

Ticket: A literal betting ticket or term for a receipt or digital confirmation that a wager has been placed.

Action: Another way to say bet/wager.

Example: If you have action on the game, it means you have already placed a wager.

Chalk: A slang term for the listed favourite for a given sporting event. A chalky pick is predicting a listed favourite will emerge victorious. The more money you need to risk in order to make a profit, the chalkier the pick is.

Lock: A figurative term given to teams/individuals expected to win easily.

Longshot: A team/individual considered highly unlikely to win a game/competition; a large underdog according to the betting odds.

Off the board: When a sportsbook temporarily stops accepting wagers on a given game or sporting event, often after an injury or something newsworthy happens.

Example: A team’s starting quarterback sustains an injury in practice four days ahead of a game. A sportsbook may take that game off the board until more is known about the QB’s injury and status.

Parlay(s): A wager where multiple selections are made. The potential payout is higher than it would be if you bet each selection individually because there is a multiplier involved but each of leg of the parlay must win for the bet to be successful.

Teaser(s): A multifaceted type of bet that allows a bettor to alter point spreads or totals (or both) when betting on multiple games or betting both side and total within the same game. A bettor can move the line a set number of points. Teaser bets are similar to parlays in that all legs of the bet must win in order for a bettor’s ticket to cash.

Example: Before an NFL Sunday, you are considering taking two underdogs both listed at +2.5 (-120). You are hesitant to predict both teams can either win or keep their games to within two points but you do feel confident both underdogs can stay within one score, so you move the line of both games six points to +8.5. Now, both teams just need to lose by eight or fewer points (instead of two points or fewer) or win outright for the ticket to cash at the same -120 price.

Futures: A futures bet is a wager on a sporting event, even though the outcome won’t be determined until a later date, such as placing a bet on a team to win a league championship but placing it before or during the season opposed to right before the championship series/game.

Hedging: Betting placed against an active bet you’ve made as a way to minimize losses or ensure a small profit depending on whether or not the lines changed since the bettor first placed the original wager.

Prop bet/Exotic wager: Any action besides choosing a side or betting the total. There are a wide array of prop bets that vary from sportsbook to sportsbook.

Follow/Ride: Going along with someone else’s picks because you trust them.

Fade/Tail: Betting the opposite side of a person because you think they are likely to be wrong.

Square(s): An inexperienced bettor, often one who frequently or exclusively bets on favourites and/or sides with the majority of the public without putting much thought into their wagers. Squares are typically low-stakes, casual gamblers who tend to lose money over time.

Example: Siblings Joe Public and John Q. Public are both well-known squares in the gambling community.

Sharp(s): Successful, often high-stakes, sports gambler(s) who can at times impact line movement or “sharpen” a line set by a sportsbook.

Example: Silver opens as a small favourite over Gold but a group of sharp bettors project Silver will win in a blowout, so they bet that game early and often once the line is posted in order to capitalize on the perceived error in judgment by the oddsmakers. This can often result a sportsbook adjusting its lines ahead of an event.

If you ever hear phrases like “the sharp money is on …” that usually refers to the side of a bet receiving more action from high-stakes or professional gamblers.

Taking the points: A term used when a bettor has placed a point-spread wager on an underdog. The team being bet on can lose the game outright but still win you your bet.

Laying the points: A term used when a bettor has placed a point-spread wager on a favourite. Not only does that team need to win the game outright, they must do so by a certain number of points.

Bad beat: A bet that looks like it’s going to be a winner until a late shift in momentum or last-minute/last-second score change.

Example: You have UNDER 224 in the Grey-Pink game. The score is 120-102 Team Grey (meaning the total sits at 222), with less than 10 seconds remaining in the game. The game is out of reach but instead of dribbling the ball until the remaining seconds tick off the clock, a Pink player heaves up a three-pointer and it goes in as the buzzer sounds. The final score ends up 120-105, the total ends up being 225 and UNDER bettors suffer a bad beat.