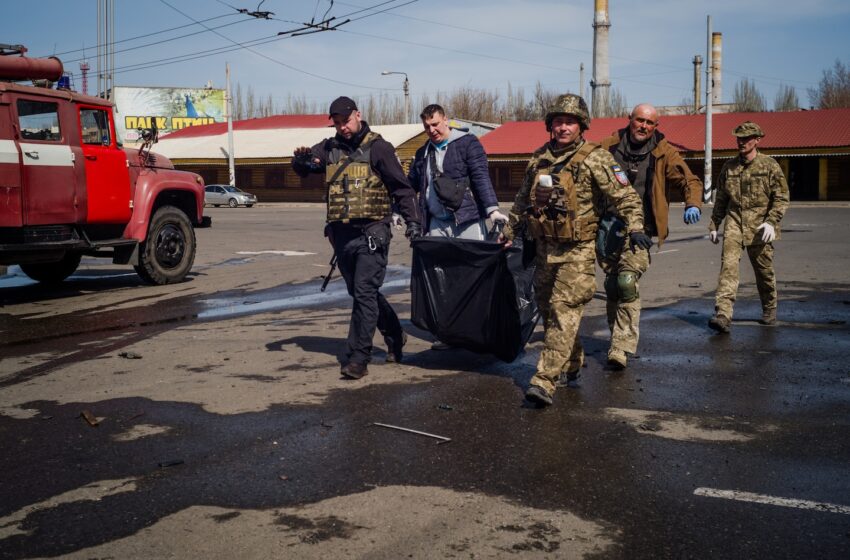 Ukrainian President Volodymyr Zelensky called on leaders of Western democracies to “follow the example of the United Kingdom” during British Prime Minister Boris Johnson’s surprise visit to Ukraine on Saturday.

“We have to exert pressure in the form of sanctions, and I’m grateful to the United Kingdom that continues and intensifies the sanctions and also provides significant support to Ukraine by reinforcing our defense capacities,” Zelensky said at a news conference, calling on Western countries to impose an embargo on Russian energy sources and supply more weapons to Ukraine.

Calling Moscow’s war “inexcusable,” Johnson pledged to intensify sanctions on Russia, “not just freezing assets in banks and sanctioning oligarchs, but moving away from the use of Russian hydrocarbons.” He also promised Britain’s help with clearing mines Russian forces left behind and said that Britain would liberalize trade with Ukraine.

“What this war is certainly producing is a clarity about a vision for the future of Ukraine, where together with friends and partners, we, the U.K., and others, supply the equipment, the technology, the know-how, the intelligence, so that Ukraine will never be invaded again — so that Ukraine is so fortified and so protected that Ukraine can never be bullied again, never be blackmailed again, never be threatened in the same way again,” Johnson said at the news conference alongside Zelensky.

The trip was Johnson’s first to the war-ravaged country since the Russian invasion began. A Downing Street spokeswoman said the British leader traveled to Ukraine in “a show of solidarity with the Ukrainian people” and intended to present a new package of military and financial aid.

The British Embassy in Kyiv announced the visit by sharing a photo on Twitter of Johnson and Zelensky on Saturday with the caption, “Surprise.” The two leaders were pictured sitting across from one another at a conference table, with the British and Ukrainian flags in the background.

Later Saturday, Zelensky shared a video on his Telegram channel showing the two men walking down largely empty streets in Kyiv, flanked by soldiers. A Ukrainian man they encounter on one street corner yelled out thanks to Johnson before shaking his hand. During their walk, a woman who said she was from Kharkiv offered Johnson and Zelensky ceramic roosters, which became a symbol of Ukrainian resilience after one such ceramic survived a Russian attack on a building in the village of Borodyanka near Kyiv, the president’s office said.

Today I met my friend President @ZelenskyyUa in Kyiv as a show of our unwavering support for the people of Ukraine.

We’re setting out a new package of financial & military aid which is a testament of our commitment to his country’s struggle against Russia’s barbaric campaign. pic.twitter.com/KNY0Nm6NQ3

In a Telegram post after the meeting, Andriy Yermak, head of the presidential office, called the conversation between Zelensky and Johnson “very full and constructive.” Yermak said he is in regular contact with Johnson’s national security adviser, Stephen Lovegrove, and with David Quarrey, his foreign affairs adviser, “so the visit was not spontaneous.”

Johnson traveled to Ukraine as Russia was preparing to invade. Oliver Dowden, chairman of the Conservative Party, told LBC Radio last month that the British prime minister was “desperate” to go to Ukraine and has a “real emotional connection” with the Ukrainian people.

Zelensky has repeatedly praised Johnson, calling him “an example” for other world leaders. Johnson and Zelensky reportedly speak most days, and Britain moved to help Ukraine before other European countries.

Zelensky expressed gratitude on Saturday toward Johnson for the “direct, very clear and specific position of your wonderful and powerful country,” thanking him for visiting and calling him “our most sincere friend.”

“You came here, and we are especially grateful that this happened — this is a true reflection of the decisive and significant support to Ukraine from the United Kingdom, and we always are grateful for that, we shall always remember that,” Zelensky said.

Johnson’s trip came a day after he announced that Britain would provide an additional $130 million worth of weapons for Ukraine after the “unconscionable bombing” of fleeing Ukrainians at a train station in eastern Ukraine on Friday.

In Kyiv on Saturday, Johnson pledged 120 armored vehicles and new anti-ship missiles to Ukraine. He also said the U.K. would guarantee an additional $500 million in World Bank lending to Ukraine, according to a statement from Downing Street.

Johnson’s visit followed a trip by European Union leaders to Ukraine on Friday. Because Britain is no longer a member of the E.U., Johnson has made a coordinated but separate effort to show support for Ukraine.