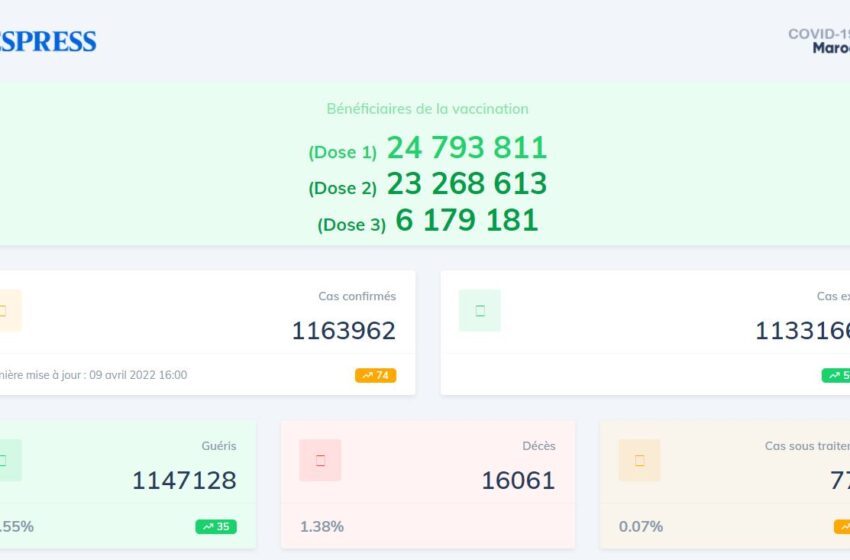 REA bed occupancy rate down to 0.4% In Morocco, the occupancy rate of intensive care beds is down and stands this Saturday, April 9 at 0.4%. Thus, the total of severe cases admitted to intensive care in the Kingdom stands at 19 cases. No new critical case has been admitted to the REA during the past 24 hours, the Ministry of Health reports in its daily epidemiological report.

The number of new tests carried out in 24 hours reached 5,560 tests, bringing the national total of tests since the start of the pandemic to 11,331,667. In addition, Morocco has once again not recorded any deaths due to Covid-19 in the past 24 hours. The national total of deaths since the start of the pandemic therefore remains stable this Saturday at 16,061 as does the fatality rate which is at 1.38%.

Morocco has also recorded 35 recoveries, bringing the national total since the start of the pandemic to 1,147,128 remissions. The recovery rate stands at 98.55% this Saturday, while the total number of active cases stands at 773 cases (0.07%).

In addition, and as indicated by the MoroccoLatestNews monitoring and monitoring platform, www.moroccolatestnews.com, the Kingdom has identified during the past 24 hours, 74 new confirmed Covid-19 cases, bringing the national total of contaminations proven to 1,163,962 cases. The total of cases on artificial respiration fell to 11 cases on Saturday.

Regarding vaccination, the number of recipients of the first dose of the vaccine since the start of the national campaign reached 24,793,811, 23,268,613 received D2 while 6,179,181 received D3, reports the department of Khalid Ait Taleb.

The Ministry of Health thus invites citizens to respect the rules of hygiene and health safety as well as the preventive measures taken by the Moroccan authorities by showing responsibility and patriotism.