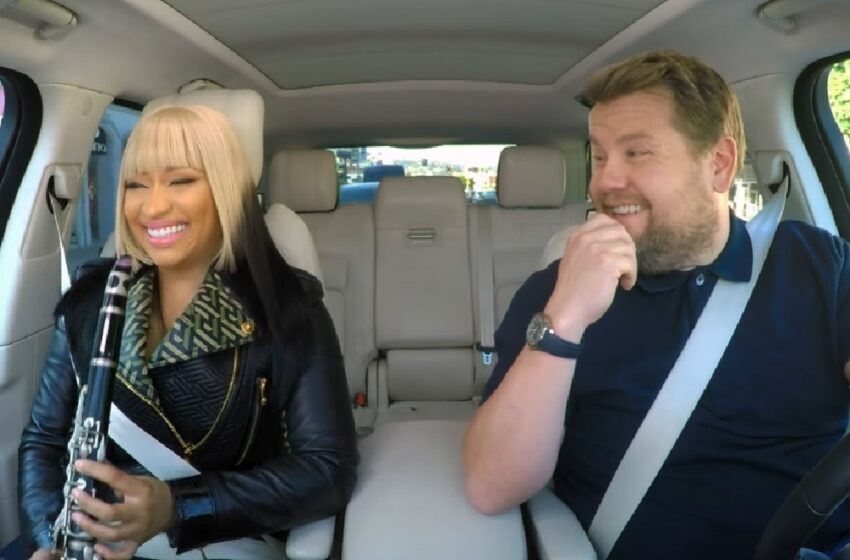 Six years after Adele joined James Corden for Carpool Karaoke, shocking the world as she perfectly rapped Nicki Minaj’s verse from the song Monster, the Queen of Rap has returned the favour and sang a few lines of Adele’s hit single Someone Like You, with the host of The Late Late Show by her side.

In almost 18 minutes of hilarity and chaotic good fun, Minaj and Corden pull out all the stops for some of the rapper’s most recognisable tunes, such as Anaconda and Super Bass.

Corden even pulled a clarinet from the back of the vehicle partway through the video, handing it over to Minaj and asking her if she could still play it, after hearing that she had quite the talent for playing the instrument in her earlier years.

Though she could only blow a few notes, Corden pointed out that the two she did were reminiscent of the Jaws theme tune which honestly, was pretty accurate.

Getting vulnerable and talking about her mental health, Minaj said that once she was catapulted into the public eye and celebrity status, the constant scrutiny had an effect and raised her anxiety levels, despite her “natural state” being one of confidence when she was younger.

After putting on a hilarious British accent for much of the carpool, it is here where Minaj really lets her walls down.

She explained: “I just don’t think it’s natural. It’s not natural for a human being to feel like everyone’s critiquing them.”

She also spoke about becoming a mother to her son in September 2020, who she said she was “magically in love” with, no matter what else was going on in the world.

“He just makes me laugh, makes me smile, makes me happy,” she said. “He’s just so cute and cuddly. I rap and sing to him all the time. I just make up melodies all day.”

by Daniel Falconer for www.femalefirst.co.uk
find me on and follow me on