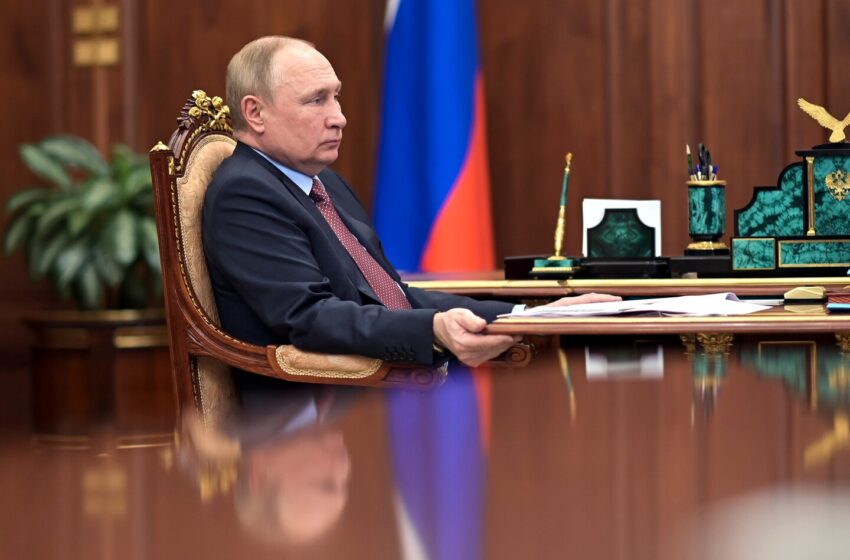 You’re reading an excerpt from the Today’s WorldView newsletter. Sign up to get the rest, including news from around the globe, interesting ideas and opinions to know sent to your inbox every weekday.

For years, Russian President Vladimir Putin looked to divide Americans. There was election interference, disinformation projects and, of course, that ever-present dodgy Russian money sloshing around Washington and other Western capitals. All served to weaken U.S. resolve. But in the space of just a few months, Putin has done something far harder than dividing Americans: He’s united them.

Well, up to a point.

A new poll of U.S. adults conducted by Pew Research Center found the number of Americans who said Russia was an enemy had surged from 41 percent in January to 70 percent in late March, when the poll was conducted. Twenty-four percent described Russia as a competitor of the United States, while just 3 percent said it was a partner.

Crucially, Russia’s invasion of Ukraine has led to revulsion along both sides of the political spectrum in the United States. Democrats and Republicans largely agree on the subject, with 72 percent of Democrats and 69 percent of Republicans describing Russia as an enemy. And Pew notes that the change in attitudes is asymmetrical.

“While negative sentiment toward Russia has increased substantially among both Democrats and Republicans since 2020, Republicans’ views have changed more drastically,” Pew notes, pointing to separate results that show negative views among Democrats increased by 23 percent in two years — and 35 percent for Republicans.

But this being America, dysfunction and division are never far from the surface. For the Biden administration, this relative unity against Russia is not a relief. Most signs suggest that any support for action against Ukraine will not help his underwater approval ratings. Indeed, polls suggest that voters support President Biden’s actions against Ukraine — they just want far more of it.

A survey conducted by the Associated Press-NORC Center for Public Affairs Research and released late last month found that while the United States had imposed jaw-dropping sanctions and supplied more military aid to Ukraine than ever, 56 percent of the country thought Biden had not been tough enough on Russia. Even Democrats weren’t sure, with 43 percent favoring a tougher approach.

Exactly what such tougher action would entail isn’t necessarily clear, given mixed signs from other polling. Even so, congressional critics have seized upon this idea. Senate Republican Leader Mitch McConnell (R-Ky.) has accused the White House of only belatedly doing things it had been slow-walking out of fears that they were “too provocative or too escalatory.”

But the lack of action on Ukraine from Congress reflects Republicans’ own mixed record on Russia, as The Post’s Mike DeBonis wrote this week. President Donald Trump, still a major power in the party, was deeply skeptical of U.S. relations with NATO and ordered his staff to withhold aid to Ukraine days before pressuring Ukrainian President Volodymyr Zelensky to share compromising material about Biden’s son Hunter.

Zelensky, once a big player in one of the two impeachment dramas that engulfed Washington during the Trump administration, is now the star of the show, remarkably popular not only among Democrats but Republicans, too.

Congress is yet to send any piece of stand-alone legislation on Ukraine to Biden for his signature. And though blame lies with both parties — Democrats have little impetus to allow legislative action that could bind the White House to action, such as a proposal to supply Ukraine with MiG-29 jets under NATO-member control — many lay the blame with the opposition.

“If not this, then what? If you can’t get your act together on legislating on something where there is so much unanimity, you know, when can you ever do it?” Dan Diller, a former aide to Richard Lugar, a longtime Republican senator from Indiana who died in 2019, told DeBonis.

Even a purely symbolic vote in support of NATO and its principles was opposed by 30 percent of House Republicans on Tuesday.

The Russian rhetoric that adds weight to charges of ‘genocide’

New evidence of atrocities may push harder lines. The Washington Post, along with other media organizations, human rights groups and Ukrainian officials, have documented significant evidence of violence against civilians and potential war crimes in areas held by Russian forces before they withdrew in recent days.

In response, the Biden administration is imposing new sanctions that will include two of the country’s largest banks as well as Putin’s adult children, while the U.S. Department of Justice also indicted Konstantin Malofeyev, the first criminal charges against an oligarch since the invasion began.

But is that enough for Americans?

Some polls have already suggested that more than a third of Americans would favor military action in Ukraine, even if it risks war with a nuclear-armed Russia. These polls, as well as the most recent by Pew which showed that a plurality of Americans view Russia as an enemy, were conducted before the shocking scenes we saw this week from places like Chernihiv and Bucha.

Some U.S. lawmakers are hinting that the sanctions on Russia, historic in scale and scope, should also be permanent — or at least stay in place until Putin leaves power. In interviews with Politico’s Nahal Toosi, Republicans and Democrats alike argued that sanctions should not be lifted anytime soon. “I can’t imagine returning Russia’s wealth to Putin after what he’s done and while Ukraine lies in ruins,” Rep. Tom Malinowski (D-N.J.) told Politico.

Biden, who has a long history with Putin, is no fan of the Russian leader as his recent ad-libbed remarks — “For God’s sake, this man cannot stay in power!” — show. But even if the Russian president has united much of the United States that his country is the enemy, Americans remain divided on how to deal with that enemy.