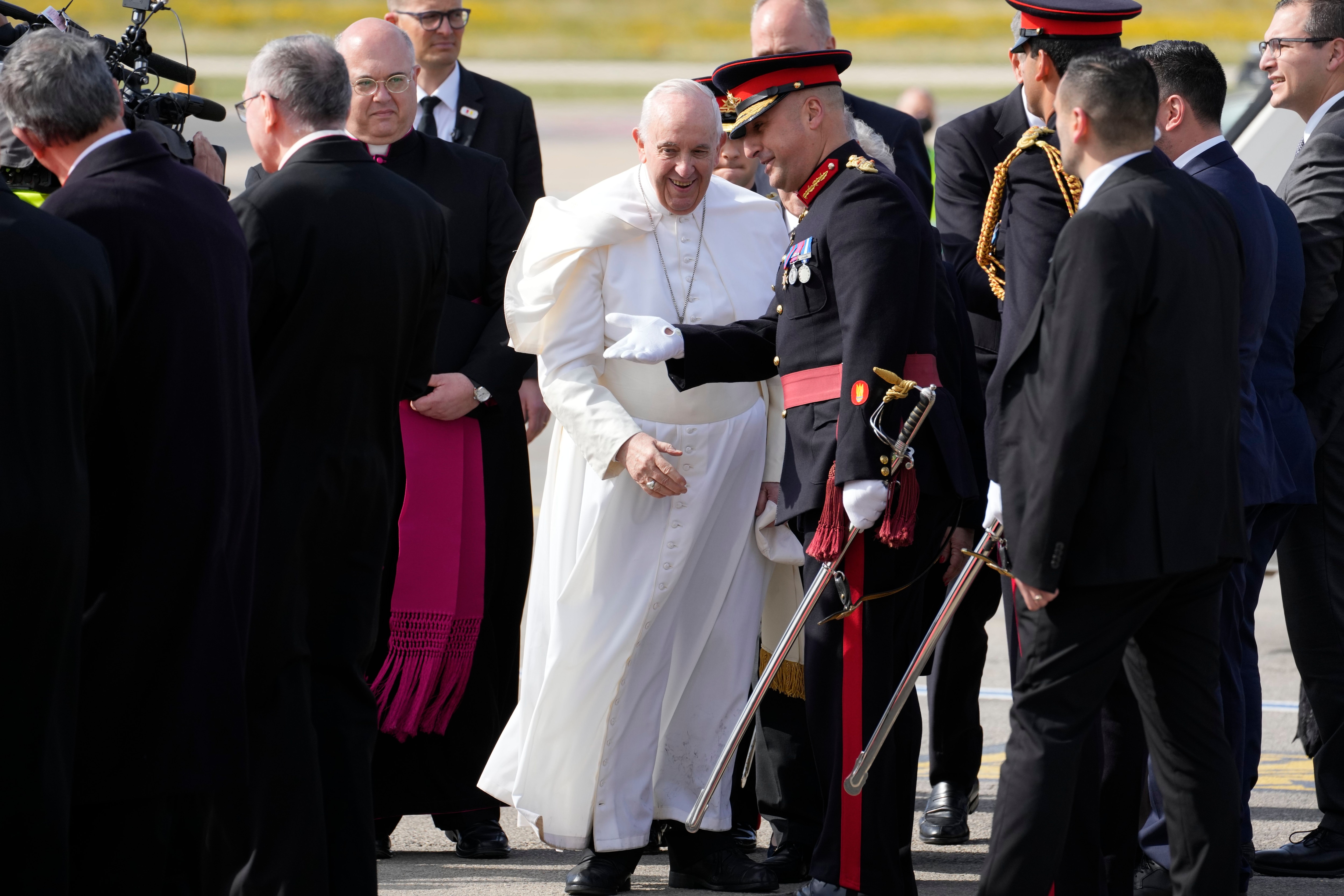 VALLETTA – Pope Francis said Saturday he is studying a possible visit to Kyiv and he blasted Russian President Vladimir Putin for launching a “savage” war. Speaking after his arrival in Malta, he delivered his most pointed and personalized denunciation yet of Russia’s invasion of Ukraine.

Francis didn’t cite Russian President Vladimir Putin by name, but the reference was clear when he said that “some potentate” had unleashed the threat of nuclear war on the world in an “infantile and destructive aggression” under the guise of “anachronist claims of nationalistic interests.”

“We had thought that invasions of other countries, savage street fighting and atomic threats were grim memories of a distant past,” Francis told Maltese officials and diplomats on the Mediterranean island nation at the start of a weekend visit.

Francis has to date avoided referring to Russia or Putin by name. But Saturday’s personalization of the powerful figure responsible marked a new level of outrage for the pope.

“Once again, some potentate, sadly caught up in anachronistic claims of nationalist interest, is provoking and fomenting conflicts, whereas ordinary people sense the need to build a future that will either be shared or not be at all,” he said.

The Vatican tends to not call out aggressors in hopes of keeping open options for dialogue. The Vatican, which in recent years has forged unprecedented new relations with the Putin-allied Russian Orthodox Church, had offered itself as a potential mediator but to date has been largely left on the diplomatic sidelines.

Francis told reporters en route to Malta that a possible visit to Kyiv was “on the table,” but no dates have been set or trip confirmed. The mayor of the Ukrainian capital had invited Francis to come as a messenger of peace along with other religious figures.

Francis also said that the war had pained his heart so much that he sometimes forgets about the pain in his knees. Francis has been suffering for months from a strained ligament in his right knee. The inflammation got so bad that the Vatican arranged for a tarmac elevator to get him onto and off the plane for Saturday’s flight to Malta.

The visit, originally scheduled for May 2020, was always supposed to focus on migration, given Malta’s role at the heart of Europe’s migration debate.

Speaking with Malta’s president by his side, Francis denounced the “sordid agreements” the European Union has made with Libya to turn back migrants and said Europe must show humanity in welcoming them. He called for the Mediterranean to be a “theater of solidarity, not the harbinger of a tragic shipwreck of civilization.”

Francis was referring to the seven-year-old EU program to train Libya’s coast guard, which patrols the North African country’s Mediterranean coast for migrant smuggling operations and brings the would-be refugees back to shore. The program was adopted and strongly backed by Italy and other front-line Mediterranean countries to try to stem the flow of hundreds of thousands of desperate migrants who pay Libyan-based smugglers to cross the Mediterranean to Europe.

Human rights groups have condemned the EU-funded program as a violation of the migrants’ rights and documented gross abuses in the detention camps where returned migrants are then held. Just this past week, German said its military would no longer provide training to the Libyan coast guard given its “unacceptable,” and in some cases illegal, treatment of migrants.

Francis has condemned the Libyan detention facilities as concentration camps, but he went further on Saturday in shaming the EU for its complicity in the abuses committed.

“Civilized countries cannot approve for their own interest sordid agreements with criminals who enslave other human beings,” he said. “Unfortunately, this is happening.”

“Today, when those who cross the Mediterranean in search of salvation are met with fear and the narrative of ‘invasion,’ and safeguarding one’s own security at any price seems to be the primary goal, let us help one another not to view the migrant as a threat and not to yield to the temptation of raising drawbridges and erecting walls,” he said.

“Other people are not a virus from which we need to be protected, but persons to be accepted,” he said.

Malta, the European Union’s smallest country with a half-million people, has long been on the front lines of the flow of migrants and refugees across the Mediterranean. It has frequently called upon its bigger European neighbors to shoulder more of the burden receiving would-be refugees.

Francis has frequently echoed that call, and linked it on Saturday to the welcome the Maltese once gave the Apostle Paul, who according to the biblical account was shipwrecked off Malta in around A.D. 60 while en route to Rome and was shown unusual kindness by the islanders.

Associated Press religion coverage receives support through the AP’s collaboration with The Conversation US, with funding from Lilly Endowment Inc. The AP is solely responsible for this content.