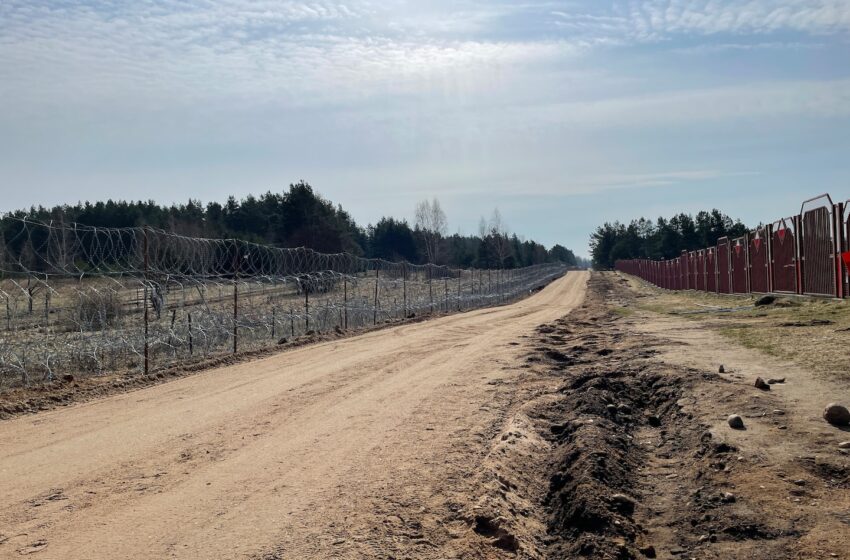 Poland builds a border wall, even as it welcomes Ukrainian refugees MICHALOWO, Poland — Her impulse was to welcome people in desperation, so Maria Ancipiuk made sure her border town was ready. As immigrants mostly from the Middle East started streaming into Poland last year from Belarus, she lobbied the mayor to offer up two empty town-owned apartments for anybody who might need them. Volunteers changed the wallpaper and renovated the flooring. Ancipiuk bought a refrigerator and a television.

Five months later, though, the apartments are empty.

Rather than being welcomed into Polish homes, the vast majority of people crossing from Belarus are being detained or pushed back by Polish authorities.

That stance, in effect just to the north of Poland’s border with Ukraine, means two different groups seeking the same thing — refuge — are arriving to find what amounts to two different versions of Europe.

They made the choice to flee Ukraine. But the next question is where to go.

On another segment of that border, Poland is trying to stop what it describes as “illegal” immigrants by using drones, infrared cameras and helicopters. It has dispatched 13,000 soldiers and border guards to patrol the forested boundary, while sealing off the area — under an emergency decree — to journalists and human rights groups. It is hurrying to finish a $380 million 116-mile steel wall that the government says will be “impenetrable.”

“I cannot stand the contrast,” said Ancipiuk, a 65-year-old town councilor and grandmother of six who now furtively provides aid to immigrants trying to move through the Polish forest at night. “Ukrainians are considered war refugees and Yemenis are considered migrants. Why? What is the difference?”

Poland’s approach is in line with the broader E.U. policy of forcefully deterring undocumented immigration — including from parts of the world where there are few legal options for reaching this continent. The E.U. has been funding the Libyan coast guard to thwart immigrants from crossing the Mediterranean to Italy. In Greece, security forces have been accused by immigrants and by Turkey of repelling would-be asylum seekers back into Turkish waters. And when Poland vowed to block people trying to cross from Belarus — a crisis orchestrated by authoritarian leader Alexander Lukashenko, who lured people to his country with the promise of access to Europe — E.U. leaders said Poland was justifiably responding to a “hybrid attack.”

Months later, though, Poland’s national human rights institution says the country is not living up to European ideals — and is also violating international law.

In isolated Belarus, everything is being weaponized to keep Lukashenko in power. That includes migrants.

It is illegal for security authorities to expel foreign nationals without giving them a chance to claim asylum. Yet humanitarian groups have documented Polish border guards tracking down people in the woods and driving them back to Belarusian border, a practice that Poland’s parliament has effectively legalized. Poland so thoroughly patrols the border that some immigrants say they’ve been pushed back to Belarus more than a half-dozen times. The Council of Europe’s human rights commissioner said one person who returned to Belarus had given birth only hours earlier.

Poland has garnered much praise for its willingness to accept so many refugees in the wake of Russia’s invasion of Ukraine. But the war also leaves Poland in a position where it is sending people back to a country that is serving as a staging ground for missiles launched into Ukraine.

“Poland should not be sending anybody back,” said Hanna Machinska, Poland’s deputy commissioner for human rights. “Belarus is not a safe country. There is no question about it.”

Belarus has one of the world’s most repressive governments, and its approach to immigrants is also harsh: Though it invited thousands of people, it appears to have no interest in hosting them; hundreds spent the winter in a warehouse, and when the facility was recently shuttered, the immigrants were taken to the Polish border and given instructions to leave.

For those crossing from Belarus who are fortunate enough not to be pushed back, the next stop is generally a closed detention center, including one where people are kept in rooms with 24 beds. Poland permits only a small subset to move into alternative facilities — like the homes Ancipiuk had prepared in Michalowo. Since January, as the overall flow from Belarus started to decline, the number of lucky few has been zero.

In mid-March, Ancipiuk received a call from a regional official, notifying her of funding incentives for towns that would host Ukrainians.

She asked if there were similar incentives for hosting people who’d crossed from Belarus.

“There was a bit of consternation on the line,” Ancipiuk said.

She never heard back with an answer but took the silence as a no. Her town is now offering the two apartments to refugees from Ukraine as well.

At Poland’s border agency headquarters in Warsaw, Lt. Anna Michalska said her country is responding as any should: by defending order and its own laws. Lukashenko had precipitated the emergency in a place where undocumented border-crossings had once been “practically zero,” she said, and she argued that the people who’d taken the offer to go to Belarus had the time and luxury to plan their journey. They booked tourist visas. Unlike Ukrainians, she said, they are not looking “for the first place to be safe.”

What they tend to want above all, she said, is a life in Germany.

She denied the widely documented accusation that Poland is pushing back people who request asylum. Most people don’t want to apply for protection, she said, knowing such a request triggers a mandatory stay in the country. She said there is no legal problem in returning people to Belarus.

“I don’t have information that there is war in Belarus,” she said. “We’re not a taxi service from Belarus to Berlin.”

So Poland is building its wall. The border agency granted two Washington Post journalists access to the restricted zone, providing them a meeting point five miles from Belarus, where a border guard van was waiting. In the exclusion zone, police worked checkpoints, and the road through villages and small farms was all but empty, aside from military vehicles. The border guards described a daily tension: immigrants who launch stones at security authorities, smugglers who run routes to and from Germany, activists who communicate with the immigrants and “incentivize” them to cross.

Then the van stopped at the wall.

It is partially completed, composed of 18-foot-high planks of vertical steel beams, with tiny spaces in between. The spaces provide visibility to the other side, and from afar, the wall has the look of a translucent silver strip running along the horizon, covering a territory where this year there have been more than 3,500 attempts to cross.

“Everything is going according to plan,” said Katarzyna Zdanowicz, a border guard spokeswoman who was on the tour. She said the wall would be completed in June.

She said the border guard over the past months has improved “a lot” in its efficiency in stopping people. While waiting for the wall to be completed, the agency has strung razor wire across the border, plowed new roads and purchased tear gas canisters.

As part of the tour, Zdanowicz walked over to a green-painted Toyota SUV, parked in a field, where two agents were patrolling the border with high-resolution cameras.

“We’re trying to show that this is not the way to come,” she said.

In villages near the border, some residents — sympathetic to the plight of immigrants — have taken to turning on green lights in their homes, a signal that they have a safe place to stay for someone on the run. Michalska, the border official in Warsaw, said it is permissible to provide housing for somebody coming from Belarus — on the condition that the host immediately alerts the border guards.

“Otherwise,” she said, “you’re offering help for an illegal stay in Poland.”

Activists and human rights officials say Poland is treating the immigrants coming through Belarus as universally undeserving of protection in Europe, when that is not always the case. Some come from countries, such as Cameroon, whose citizens rarely win asylum in Europe. But others come from countries such as Yemen, ravaged by war, or Syria, where towns have been decimated by Russian airstrikes.

For Ibrahim Al Maghribi, 27, a Syrian, seeing Poland’s response to Ukraine has made him feel all the more confounded about the inequities.

After being displaced from his home outside Damascus, all he wanted was safety and a “decent life,” he said in an interview conducted over WhatsApp, because he said he could be more articulate with written English.

In a war of terrible choices, these are the fighting-age men who left Ukraine

To get that life, he booked a tour package to Belarus, where he was chauffeured by members of the Belarusian military to a spot along the Polish border they said was easy to cross. After walking miles overnight in the Polish forest, he was arrested by Polish border guards, who told him “this is not your land.” He was returned to Belarus, which denied him reentry as well, leaving him stuck briefly between two borders, before trying to enter Poland again. This time, he and some friends successfully reached the car of a smuggler and eventually wound up in Germany — a trip that cost him $5,000, paid to tour guides and drivers, as well as several nights of exhaustion and sleeplessness.

“It’s a horrible feeling to feel that you came from another planet,” said Al Maghribi, who is now applying for asylum and living in a public housing complex in Rieden, Germany. The same Polish authorities who welcome Ukrainians wouldn’t even “offer us a glass of water,” he said.

One consequence of Poland’s approach is that immigration along the Belarusian border has been pushed nearly out of view. Poland denied a request to visit the closed centers holding asylum seekers.

Activists say they have had to become more cautious after Poland last month arrested four volunteers on charges of organizing illegal immigration.

Even the number of immigrant deaths in Poland is disputed; the government says nine have died since the middle of last year, while activists put the number at more than two dozen. Among the unknowns is what happens to immigrants who are pushed back and don’t return — including two Kurdish families, both with infants, who were repelled several times after crossing into Poland and recently fell out of communication with activists.

“We can’t reach them,” said Monika Matus, an activist working with one of the main border activist groups. “This is the reason I’m having a hard time sleeping at night.”

Even at the height of the crisis, last November, the volume of people crossing was about 700 per day — compared with tens of thousands of Ukrainians. Now, the number of arriving from Belarus has dropped even farther; some days, as many as 130 try to cross, according to Polish government data. Other days, it’s only a few dozen. The decrease stems in part from pressure on international airlines and tour groups to discontinue the immigrant pipeline to Belarus. Some of those crossing now enter Belarus not directly but via Russia. Activists who used to be overwhelmed by middle-of-the-night SOS calls now go some days without a single alert.

For Poland, it’s a sign that its tactics are working.

For activists, it’s a sign that Poland’s response has been disproportionate.

“We’re spending so much money to create a fortress,” said Tomasz Thun-Janowski, a volunteer for the humanitarian aid group Fundacja Ocalenie, “when helping them would cost a fraction.”