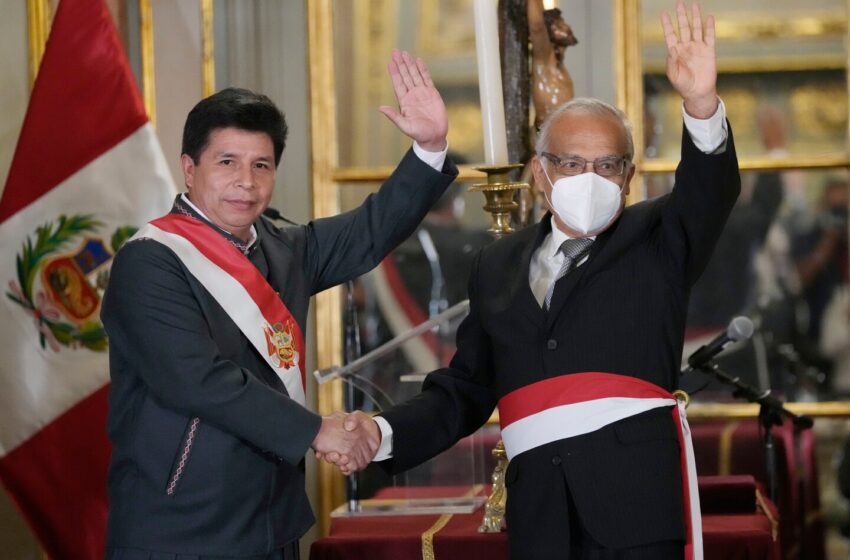 Peru’s prime minister on Thursday cited Adolf Hitler as a model in infrastructure development who turned Germany into a “leading economic power in the world,” a comment that drew outrage as his country continued to descend into political chaos.

Prime Minister Aníbal Torres celebrated the late Nazi leader while speaking in a cabinet session in Peru’s central region of Junín, where protests have erupted for nearly a week in response to the rising cost of fuel and fertilizer. Speaking of the need to invest in infrastructure, particularly in highways, Torres also mentioned Italian dictator Benito Mussolini.

“I’ll give you an example,” Torres said. “Italy, Germany were just like us, but on one occasion, Adolf Hitler visits northern Italy and Mussolini shows him a highway built from Milan to Brescia. Hitler saw that, he went to his country and filled it with highways, with airports. He made Germany the leading economic power in the world.”

The prime minister’s comments, following a series of political scandals in Castillo’s ever-changing cabinet, led to swift condemnations from the German and Israeli embassies in Peru.

“Adolf Hitler was a fascist and genocidal dictator, in whose name the worst war of all time was carried out from Germany and a genocide of 6 million Jews was committed,” the German Embassy said in a tweet Thursday that was also shared by the European Union in Peru. “Faced with this scenario, Hitler is not the appropriate reference as an example of any kind.”

The Israeli embassy in Peru said in a statement that praising Hitler “is an offense to the victims of that global tragedy.”

“Regimes of death and terror cannot be a sign of progress,” the embassy said.

Historians have pointed out, including in local news outlets on Thursday, that Torres’s comments are based on a myth — propagated by the Nazis — that Hitler was responsible for inventing Germany’s famous autobahn highway system. The country’s first highway projects began before Hitler came to power.

Later Thursday, Torres apologized for his comments, saying he did not intend to hold up Hitler as an example to emulate.

“I have also said that he was a great criminal, a great delinquent,” Torres said. He specifically referred to the Israeli ambassador, saying “Mr. Ambassador, if you think that I’ve offended you, I apologize and we will talk personally. My family is connected to Jews… So you don’t have to worry, Mr. Ambassador.”

The Israeli Embassy later shared a tweet thanking the prime minister for his apology and saying it would welcome a meeting with him.

The prime minister’s comments are the latest controversy to hit the Castillo administration, which has been plagued by allegations of corruption and criticism of his cabinet appointments. In the eight months since the inexperienced former schoolteacher came to office, he has survived two impeachment votes. His agriculture minister was implicated but not convicted in two homicides, allegations he denies. His education minister was accused of plagiarizing his doctoral thesis. His health minister, who peddled a flavored water as an anti-aging treatment, was recently impeached.

Meanwhile, blockades and civil unrest have swept the country this week, with protesters throwing stones and burning tires. At least five people have reportedly been killed in the clashes so far.

“And just when you thought things in #Peru could not get any more surreal, the Prime Minister refers to Mussolini and Hitler as models of infrastructure development,” Jo-Marie Burt, a professor of Latin American studies at George Mason University, tweeted on Thursday. “They were especially good at building trains that transported millions to their death in extermination camps.”