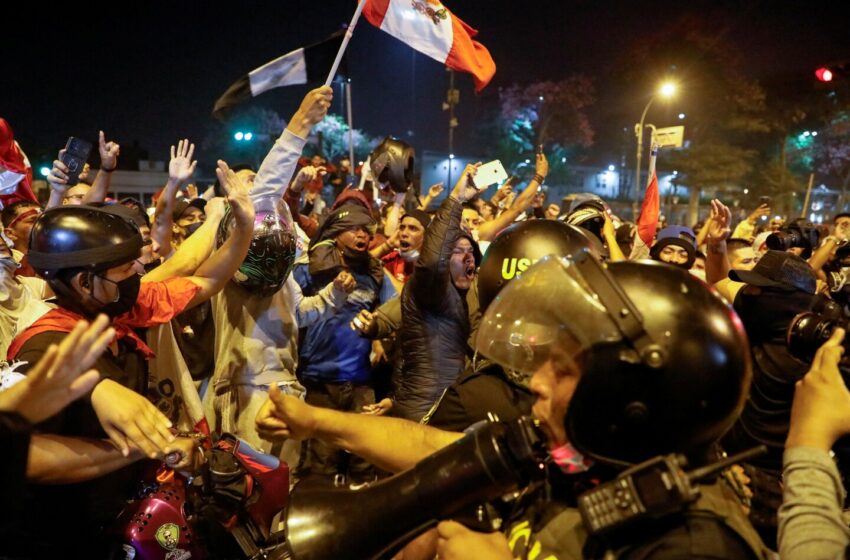 LIMA, Peru — When demonstrators picketed roads in Peru’s rural hinterland over the rising cost of fuel and fertilizer, President Pedro Castillo might have responded with empathy or dialogue.

Instead, after nearly a week of ignoring the gathering storm, Castillo, a campesino and former wildcat strike leader, poured gasoline on the fire by accusing the protest leaders of being “malicious and paid.”

As the blockades exploded into violence this week, with stone throwing and burning tires, the president reacted Tuesday with a draconian move that has outraged and baffled almost the entire country: placing Lima, the capital of 10 million people, which had been almost entirely free of the unrest, under a strict lockdown.

The move was widely criticized as unconstitutional, abusive, disproportionate and politically suicidal. It hit the poor, many of whom live hand to mouth, particularly hard. It soon ended in farce: The inexperienced president, meeting with enraged lawmakers, announced he was suspending the measure but then failed to sign the necessary decree, just as demonstrators, this time waving red-and-white Peruvian flags, gathered in downtown Lima for the first time.

“The government has not only betrayed its promises of change but now repeats the right’s ‘conflict resolution’ method,” tweeted New Peru party leader Verónika Mendoza, an erstwhile Castillo ally. “Ignore those who mobilize with legitimate discontent over the economic and political situation, repress, criminalize and restrict rights.”

At least five people were reported killed in clashes that continued Wednesday; two more were reported to have been partially blinded by rubber bullets fired by police. The epicenter of the unrest was the central region of Junín, where a mob had stoned the home of former governor Vladimir Cerrón, mentor to Castillo and founder of his Marxist-Leninist party Free Peru.

Compounding the authoritarian symbolism, the lockdown came on the anniversary of disgraced former president Alberto Fujimori’s 1992 “self-coup,” when he shuttered Congress and the courts, supposedly to better confront the Maoist insurgents of the Shining Path.

The chaos this week comes eight months into the presidency of a political neophyte who raised expectations among poor Peruvians but whose administration has disintegrated into a steady stream of self-inflicted scandals, disastrous political decisions, a growing power vacuum and public disgust.

‘The whole world eats well, and we do not’

Two of the president’s nephews and his former presidential secretary, Bruno Pacheco, are on the run from prosecutors who want to question them about influence peddling at the heart of the Castillo administration. Pacheco, whose office was next door to the president’s, was found with $20,000 hidden in his office bathroom. He has since given three different explanations for the cash, claiming at one point that it was his savings and at another that it was to pay his lawyer.

A hallmark of Castillo’s presidency has been his consistent appointment of woefully inappropriate candidates to public office. They include Oscar Zea, the agriculture minister, implicated but not convicted in two homicides — he denies wrongdoing in both cases — and Rosendo Serna, the education minister, accused this week of plagiarizing even the acknowledgments in his doctoral thesis.

The recently impeached health minister, Hernán Condori, as a doctor had hawked a product known as “clustered water” — essentially flavored water — as a supposed anti-aging treatment, at $80 per 100-milliliter bottle. At his inauguration, he lied flagrantly, claiming the product had been approved by the U.S. Food and Drug Administration and its Peruvian counterpart, Digemid.

Meanwhile, there has been an exodus of qualified officials from public agencies, who have either been squeezed out or resigned in fury at Castillo’s appointees, many of them unqualified Free Peru apparatchiks, some implicated in corruption and other criminal behavior.

According to one recent poll, just 24 percent of Peruvians approve of Castillo’s performance; 71 percent do not expect him to last his five-year term.

In Peru, a rural schoolteacher rises from obscurity to the presidency

Yet Congress, dominated by the right-wing opposition and which has spent most of the last eight months trying to reverse reforms brought in by the administration of former president Martín Vizcarra to make politics cleaner and more representative, is held in even greater contempt, with just 17 percent approval.

Castillo has survived two impeachment votes so far. Lawmakers last week voted 55-54 in favor of the second motion, far short of the two-thirds supermajority required for his removal. Castillo was accused of deciding policy with shadowy advisers rather than the cabinet and meeting secretly with lobbyists before their companies irregularly won multimillion-dollar public contracts.

The attempts to oust Castillo were driven by the same ultraconservative politicians who refused to recognize his presidential victory last June. But now, exasperated centrists and even some on the left are willing to countenance ousting Castillo using the constitutional trigger of “moral incapacity,” an undefined 19th-century term intended to cover infirmity.

One of them is Ed Malaga-Trillo, a neuroscientist and congressman from the small, moderate Purple Party. He voted against Castillo last week — reluctantly, he said — in response to what he sees as the president’s dismantling of the fragile gains made by Peruvian institutions since the resumption of democracy in 2000.

“You are taking a decision when you vote, whether you like it or not,” Malaga-Trillo said. “And we have reached a critical point, with the constant incompetence, errors of judgment and corruption. This lockdown is just the latest example, a measure that mistreats the most vulnerable in particular.”

A growing number of Peruvians want new elections. But that’s unlikely to solve the problem, political scientist Paula Tavara warns. The problems with Peruvian politics are structural, she says, including the often corrupt interests that control many of the existing parties and the high barriers to registering new parties — including a requirement that they have nearly 25,000 members before they can participate in elections.

Meanwhile, Congress has now twice suspended the implementation of a new law requiring internal primaries, reverting instead to the system of party bosses personally picking candidates.

“The problem goes deeper than the individual faces,” Tavara says. “It is about the system, and unless we change that before any new elections, we are just going to get more of the same.”