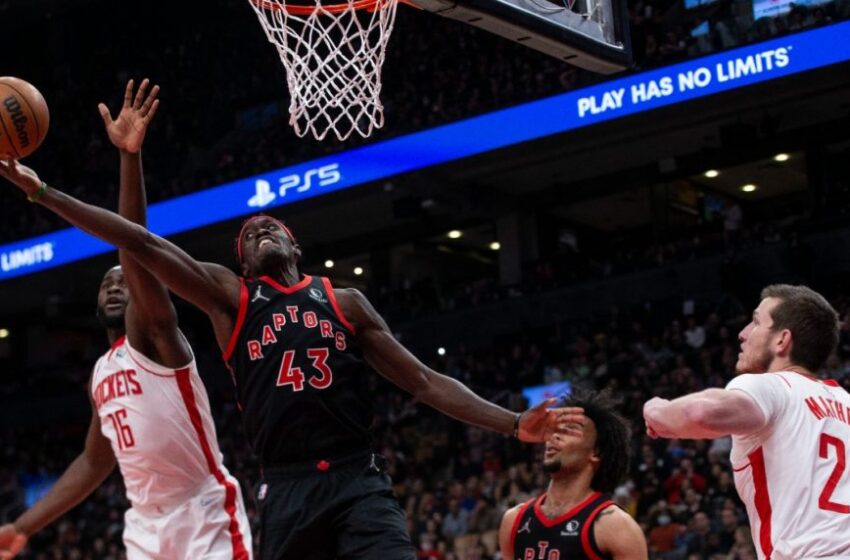 TORONTO — Pascal Siakam had a double-double with 29 points and 12 rebounds to lead the Toronto Raptors past the Houston Rockets 117-115 Friday night.

With the win, Toronto can now finish no lower than fifth in the Eastern Conference with one game left to play in the regular season.

The Rockets (20-61) were led by Kevin Porter Jr., who finished with a double-double with 35 points and 10 rebounds.

The Raptors have now won three games in a row and sport an 8-2 in their last 10 games.

Toronto got off to a slow start, going down by as many as 24 points early in the second quarter. The Raptors were able to chip away at the deficit, though, and got the game back to a tie on several occasions in the third and fourth periods.

A difficult layup from Trent Jr. with just 4.8 seconds to go proved to be the game winner, as Toronto’s defence stood tall on Houston’s last possession to secure the win.

Trent Jr. and Raptors rookie Scottie Barnes combined to score 21 points in the fourth quarter with Barnes electrifying the sold-out crowd of 19,800 in attendance at Scotiabank Arena with a fast-break dunk to put the Raptors up by four with just a few minutes to go followed up by Trent Jr.’s game-winning layup just a few minutes later.

Siakam’s effort kept the Raptors within striking distance heading into the crucial fourth quarter. He had 18 of Toronto’s 57 points in the first half, keeping the game competitive as Houston’s lead grew.

Houston raced out to a hot start, as Toronto struggled on both ends of the court early in the game. The Rockets shot 65.2 per cent from the field in the first quarter, while the Raptors managed just 22.2 per cent in their own end.

Fifteen first-quarter points from Houston guard Porter Jr. led the Rockets to a 16-point lead after the opening frame.

Toronto began to come to life in the second, as they outscored the Rockets in that quarter 37-30 and Siakam scoring 14 points in the period.

The Raptors will travel to New York to take on the Knicks in their regular-season finale on Sunday.