A Palestinian man died after being shot during clashes with Israeli troops in the northern West Bank city of Nablus on Wednesday morning, Palestinian health officials said.

The clashes came as troops conducted arrest raids and secured the restoration of a shrine in Nablus, believed to be the tomb of the biblical Joseph, after it was vandalized twice by Palestinians in recent days.

The Palestinian Red Crescent emergency service said 31 Palestinians were hurt in clashes with Israeli forces at Joseph’s Tomb. The Palestinian Authority’s health ministry later said one of them died.

On Tuesday, the military said a man was arrested in Nablus on suspicion of vandalizing the Jewish holy site.

There was no immediate comment from the Israel Defense Forces on the clashes, but earlier it said it was carrying out wide-scale arrest raids across the northern West Bank, for the fifth day in a row. 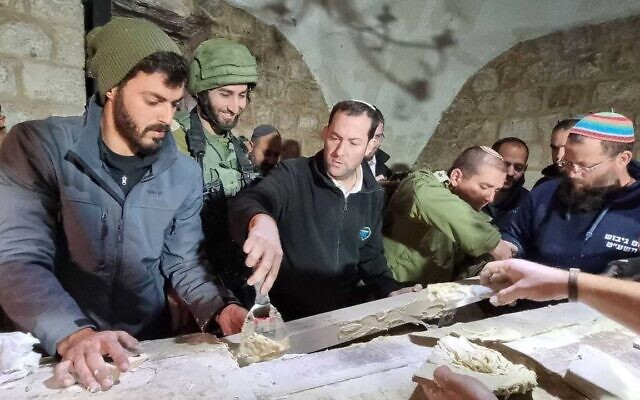 The military said troops were operating in the Jenin region, the cities of Tulkarem and Nablus, and the towns of Urif, Qabatiya, and Jaba’.

The raids in Jenin come after a spate of deadly attacks in Israel, some of whose perpetrators came from the area.

According to Palestinian media reports, there were fresh clashes between Israeli soldiers and Palestinian gunmen in the city. Heavy gunfire was heard in footage posted on social media.

Since a deadly shooting attack in Tel Aviv last week, IDF troops have been operating in the terrorist’s hometown, seeking to arrest his father and brother for their alleged involvement in the attack.

The family of gunman Ra’ad Hazem has two houses in the area — one in the Jenin refugee camp and another in the nearby village. Hazem was shot dead in an exchange of fire with police hours after the attack.

His father, Fathi, is a former security prisoner who previously served as an officer in the Palestinian Authority’s security services in Jenin. He has praised his son for the killings and refused an Israeli summons for questioning.

Tensions have risen sharply between Israel and the Palestinians in recent weeks against the backdrop of repeated terror attacks in Israeli cities that left 14 people dead. The army has stepped up its West Bank activities in an attempt to crack down on the spiraling violence.