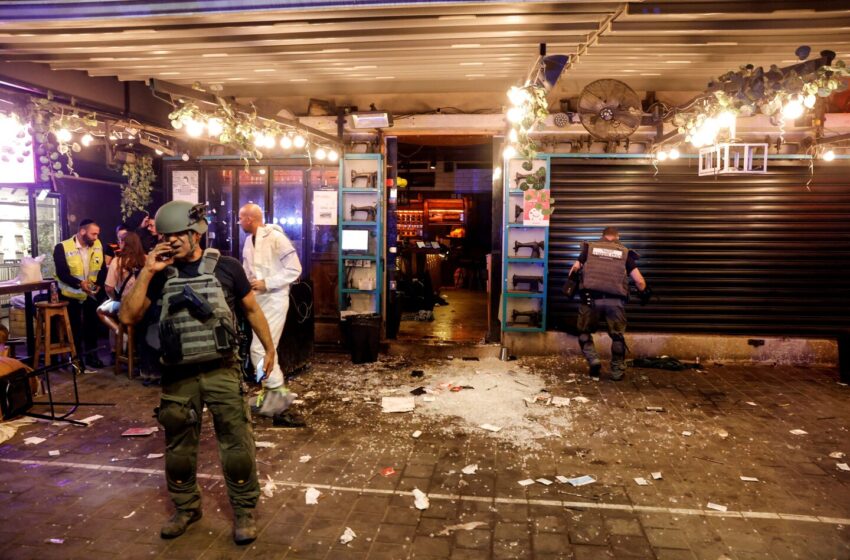 TEL AVIV — A Palestinian gunman was killed by Israeli police after fatally shooting two Israelis and injuring at least 15 others at a popular pub in central Tel Aviv Thursday night, Israeli authorities said.

The shooting comes amid a wave of terror attacks in recent weeks, the deadliest to hit Israel in years. Thirteen people have been killed in terror attacks carried out by Palestinians from Israel or the West Bank since March 22.

Israeli police said that the shooter, a man from the Jenin refugee camp in the northern West Bank, fired into the Ilka pub on Dizengoff Street, one of Tel Aviv’s busiest shopping and nightlife centers, just before 9 p.m. Thursday, the start of the weekend in Israel. He then fled the scene.

Police ordered residents to go inside, lock their doors and stay away from their windows as hundreds of officers swept the city, searching in courtyards and construction sites in pursuit of the assailant. Videos posted on social media showed emergency workers loading victims onto stretchers and working to clear debris as helicopters shone a spotlight from above.

The gunman was found and killed in a shootout with Israeli police at around 6 a.m. Friday morning near a mosque in central Jaffa, a mixed Jewish-Arab neighborhood south of Tel Aviv. He was identified as Raed Hazem, 29, and was staying in Israel without a permit from the Jenin refugee camp. The camp is a hotbed of political and militant activity in the northern West Bank.

The two Israelis killed by the gunman were men in their late 20s, according to Israel’s emergency services. More than a dozen others, who were also in their 20s and 30s, suffered gunshot wounds to their chests and stomachs, medics said.

“It’s been a very difficult night. And everyone who helped [the terrorist] indirectly or directly will pay a price,” said Israeli Prime Minister Naftali Bennett.

Bennett, along with Defense Minister Benny Gantz and Public Security Minister Omer Bar-Lev was monitoring the situation from the military headquarters in Tel Aviv, several blocks from where the attack occurred, their offices said.

American ambassador to Israel Tom Nides said in a tweet that he was “horrified to see another cowardly terror attack on innocent civilians, this time in Tel Aviv.”

Bennett announced late Thursday his government would scale up security forces in Tel Aviv, in addition to the already increased numbers of forces recently deployed throughout Israel and the West Bank. Last week, Bennett called on licensed Israelis to carry arms after a Palestinian man went on a shooting rampage in a suburb of Tel Aviv, killing five people.

Israeli security forces were on high alert ahead of Friday, the first of the Muslim holy month of Ramadan, in preparation for potential clashes near Damascus Gate in East Jerusalem. Both Israeli and Palestinian authorities have warned of a steep escalation in violence especially over the next few weeks, when in a rare instance Ramadan will coincide with Passover and Easter.

In May, also during Ramadan, clashes between Palestinians and Israelis near Damascus Gate helped spark an 11-day war between Israel and the Palestinian militant group Hamas that controls Gaza.

In a statement on its website Thursday, Hamas praised the attack in Tel Aviv, calling it a “heroic operation” that “led to the killing of a number of occupying soldiers and Zionist settlers.”

Steve Hendrix in Jerusalem and Hazem Balousha in Gaza City contributed to this report.