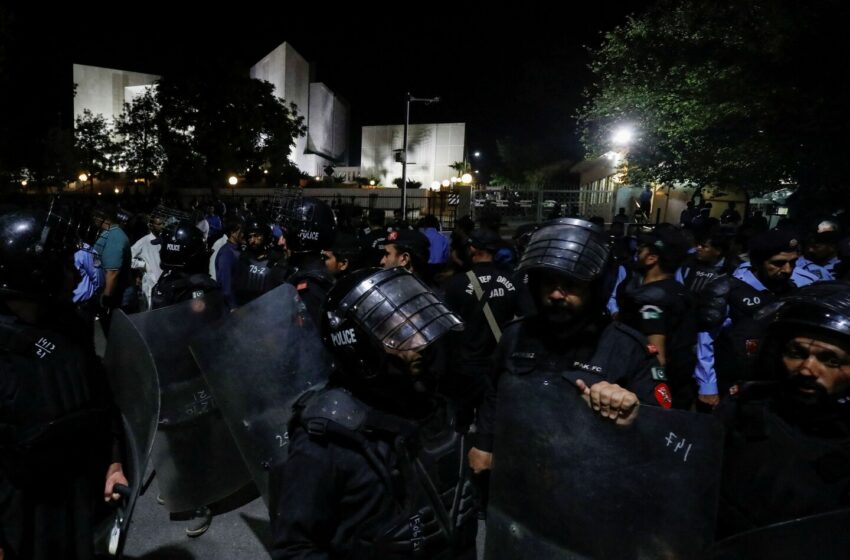 ISLAMABAD, Pakistan — Pakistan’s embattled prime minister was dealt a political blow Thursday night in his bid to cling to power, when the country’s Supreme Court overruled his effort to dissolve Parliament and cancel a no-confidence vote four days earlier — a move that aggravated already strained relations with the United States.

Imran Khan, attempting to remain in power as premier and save his faltering government, had accused U.S. officials of backing an international conspiracy against him in cahoots with his domestic adversaries, a coalition of opposition parties and defectors from his own ranks. He had orchestrated a plan to cancel the vote and dissolve the legislature, unleashing turmoil and uncertainty across the country of 220 million.

But in a unanimous vote, the high court ordered Parliament to be immediately restored and a no-confidence vote be held Saturday. Khan’s opponents had already marshaled enough votes to oust him from power when the vote was abruptly canceled Sunday after the legislature’s speaker had ruled it was illegal, saying its advocates were backed by a foreign power.

As the court decision was announced Thursday, cheers and shouts went up among opposition leaders and supporters who had waited outside the court compound as darkness fell across Pakistan’s capital and hundreds of police barricaded the surrounding streets.

“The court has saved Pakistan and the constitution by this historical verdict,” declared Shehbaz Sharif, leader of the opposition Pakistan Muslim League, who testified during three days of court hearings on the issue. “It will strengthen the Parliament and the sovereignty of the country. … Our struggle was for the supremacy of the constitution. We are more than happy, and we thank the God for this.”

In a tweet after the ruling, Khan said he would address the nation Friday. “I have always & will continue to fight for Pak till the last ball,” the former cricket champion declared. If Khan is voted from power Saturday, Sharif, a veteran politician from one of Pakistan’s two major parties, is considered likely to be named interim prime minister and then seek election to the post.

The decision by the high court, in strongly rejecting Khan’s effort to circumvent the legislative process, seemed likely to bolster a sense of stability and legality in the country’s weak democratic system, which has suffered from repeated interventions by the military and other government forces since it was founded in 1947.

The ruling has already been greeted by some U.S. analysts as a reassuring step back from the breach, after a week in which Khan’s accusations of a U.S. conspiracy against him left the wary relationship between the two former Cold War allies in a state of unprecedented confrontation. At the same time, some warned that any new government in Pakistan will face the same problems, especially spiraling inflation, that cost Khan much of his initial popularity.

Michael Kugelman, an expert on Pakistan at the Wilson International Center for Scholars in Washington, said last week that Khan’s actions had dealt a “devastating blow to the U.S.-Pakistan relationship,” and that it would be extremely difficult to “go back to business as usual.” On Thursday night, he said that even as tensions eased, any new government would soon “be in for a rude awakening.” For Khan’s victorious opponents, he added, “the honeymoon won’t last long.”

From the beginning of his tenure, Khan, 69, began distancing himself from the United States and seeking closer relations with China, which has become Pakistan’s major investor and ally. He further alienated officials in Washington by welcoming the Taliban takeover in Afghanistan last year and saying he would never let his country become a “slave” to foreign powers.

The charismatic politician came to power in 2018 after making promises to clean up corruption, bring justice to the poor and build Pakistan into a proud, independent country. But he stumbled as a leader and lost popular support as consumer prices soared. He broke with political allies, emboldened opposition parties, and began to lose support from Pakistan’s powerful military establishment, which had backed his candidacy.

Ten days ago, Khan’s anti-American rhetoric took a new turn. While addressing a crowd of supporters, he pulled a paper from his pocket and claimed it was proof of a “foreign conspiracy” to topple his government. Soon after that, he named the United States as the culprit, alleging that a U.S. diplomat had made threats against his government in a meeting with Pakistan’s ambassador to Washington in early March.

Khan never released the document, and a spokesman at the State Department, Ned Price, said earlier this week that there was “no truth to the allegations.” He and that U.S. policy was to “support the peaceful upholding of constitutional democratic principles” in Pakistan and other countries. “We do not support one party over another.”

Pakistan’s national security committee said it reviewed the document, described as a cable sent by the ambassador about the meeting. It then issued a statement saying the U.S. official had used “undiplomatic language” in their meeting, and that this constituted “unacceptable interference” in Pakistan’s internal affairs. Shortly afterward, Pakistan’s Foreign Ministry summoned a U.S. Embassy officer and lodged a complaint, according to a U.S. official. He spoke on the condition of anonymity because he was not authorized to speak to the press.

But Pakistan’s military leaders distanced themselves from the controversy, and on Sunday, when Khan arranged to have the parliamentary vote canceled due to the alleged U.S.-backed conspiracy, the chief military spokesman quickly issued a statement saying the institution had “nothing to do with” the day’s events. Meanwhile, the army chief, Gen. Qamar Javed Bajwa, gave a speech last week saying that Pakistan and the United States enjoyed “excellent relations.”

One irony of the Supreme Court’s decision is that it formally reinstates Khan as prime minister as well as restoring Parliament to full function, finding that both branches of government were illegally shut down on specious grounds and must continue functioning so the “no-confidence” vote can take place as planned.

Husain Haqqani, a former Pakistani ambassador to Washington and a senior fellow at the Hudson Institute in Washington, said late Thursday that the court’s strong legal rejection of Khan’s actions had paved the way for a more responsible government to win power and also for improved relations with the United States.

“Khan’s incendiary rhetoric burned prospects for cooperation,” Haqqani said, pointing to his support for the Taliban and his blanket refusal to allow U.S. bases in the country. Even if bilateral ties “will not go back to the era when they were close allies,” he said, “a more serious government can at least engage and cooperate in areas of mutual interest.”