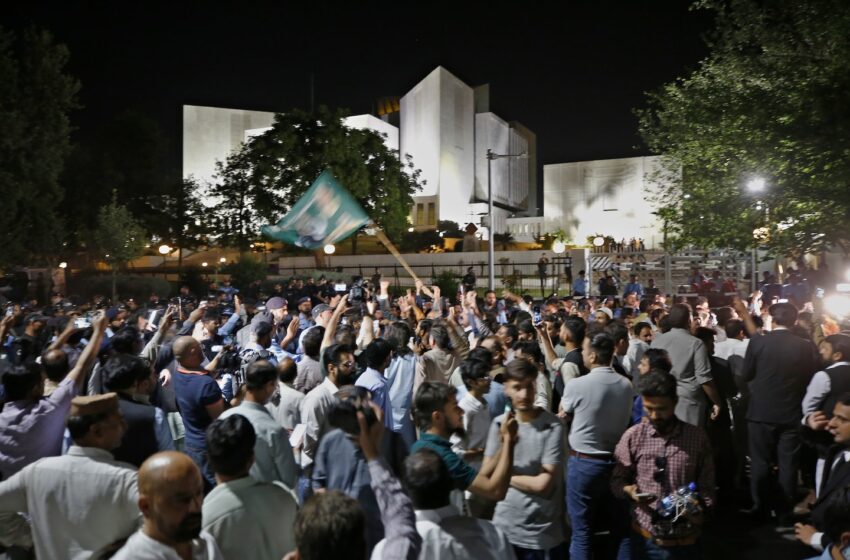 ISLAMABAD, Pakistan — Pakistan’s embattled prime minister was dealt a political blow Thursday night in his bid to cling to power, when the country’s Supreme Court overruled his effort to dissolve parliament on the eve of a no-confidence vote — a move that aggravated already-strained relations with the United States.

Prime Minister Imran Khan, in an attempt to save his faltering government and retain power as its head, had accused U.S. officials of backing an international conspiracy against him in cahoots with his domestic adversaries, a coalition of opposition parties and defectors from his own ranks. He had orchestrated a plan to cancel the vote and dissolve the legislature, unleashing turmoil and uncertainty across the country of 220 million.

But in a unanimous vote, the high court ordered parliament to be immediately restored and a no-confidence vote be held on Saturday. Khan’s opponents had already marshaled enough votes to oust him from power when the vote was abruptly canceled on Sunday.

As the ruling was announced, cheers and shouts went up among opposition leaders and supporters who had waited outside the court compound as darkness fell and hundreds of police barricaded the surrounding streets.

“The court has saved Pakistan and the constitution by this historical verdict,” declared Shehbaz Sharif, leader of the opposition Pakistan Muslim League, who testified during three days of court hearing on the issue. “It will strengthen the parliament and the sovereignty of the country. … Our struggle was for the supremacy of constitution. We are more than happy and we thank the God for this.”

For decades, Pakistan and the United States have remained wary partners and allies, fighting common enemies yet never really trusting each other. But there has never been a breach as stunning and unexpected as this one.

Ten days ago, Khan, fighting to remain in power as adversaries sought to oust him, pulled a piece of paper from his pocket before a crowd of supporters and claimed it was proof of a “foreign conspiracy” to topple his government. Soon after that, he named the United States as the culprit.

“This has dealt a devastating blow to the U.S.-Pakistan relationship,” said Michael Kugelman, an expert on Pakistan at the Wilson International Center in Washington. “It is not a death blow, but the relationship was already fragile and rife with mistrust.” After Khan’s accusation, he said, “the relationship can’t just to back to business as usual.”

Officials at the State Department have repeatedly declined to discuss the current crisis, answering questions with brief denials of any U.S. plot against Pakistan. Spokesman Ned Price, briefing reporters this week, repeated that “there is absolutely no truth to the allegations” and said that the U.S. government takes no side in foreign domestic issues.