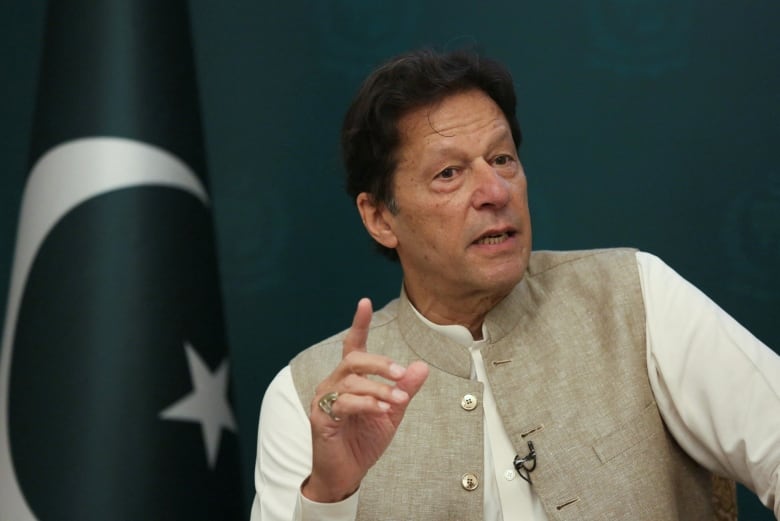 Opposition politician Shehbaz Sharif submitted his nomination to be Pakistan’s next prime minister to the legislature on Sunday, his party said, after incumbent Imran Khan lost a no-confidence vote in parliament after nearly four years in power.

The younger brother of three-time prime minister Nawaz Sharif, Shehbaz, 70, has led a bid by the opposition in parliament to topple former cricket star Khan, and he is widely expected to replace him following a vote on Monday.

But Khan’s party also submitted papers nominating a former foreign minister as a candidate for prime minister, saying their members of parliament would resign en masse should he lose, potentially creating the need for urgent byelections for their seats.

Khan, the first Pakistani prime minister to be ousted by a no-confidence vote, had clung on for almost a week after a united opposition first tried to remove him.

On Sunday, he repeated allegations that a foreign conspiracy was behind the regime change.

“The freedom struggle begins again today,” Khan said via his Twitter account, which is followed by more than 15 million people and still describes him as Pakistan’s prime minister in his biography section.

Even before the vote, Khan had called for protests, which were expected to take place late on Sunday.

“I tell all of my supporters across Pakistan, on Sunday, after Isha [evening] prayers, you all have to come out of your homes and protest peacefully against this imported government that is trying to come to power,” he said in an address to the nation on Friday.

His government fell in the early hours of Sunday after a 13-hour session that included repeated delays and lengthy speeches by lawmakers from his Pakistan Tehreek-e-Insaf party.

Opposition parties were able to secure 174 votes in the 342-member house for the no-confidence motion, giving them the majority they needed to enable Monday’s vote to elect a new premier.

Khan’s former information minister, Fawad Chaudhry, told reporters of the plan for resignations if their nominee does not win.

The speaker would be obliged to accept those resignations, which would necessitate byelections in probably more than 100 seats.

That could plunge the country into another crisis, as the election commission has previously said it would not be ready to hold elections until October.

The no-confidence vote came after Pakistan’s Supreme Court ordered parliament to convene and hold the vote.

Shehbaz Sharif said Khan’s departure was a chance for a new beginning.

“A new dawn has started…. This alliance will rebuild Pakistan,” he told parliament on Sunday.

Sharif, who for years was chief minister of Punjab province, has a reputation as an effective administrator.

His first tasks would be to repair relations with the powerful military, as well as the United States, and tend to a stuttering economy.