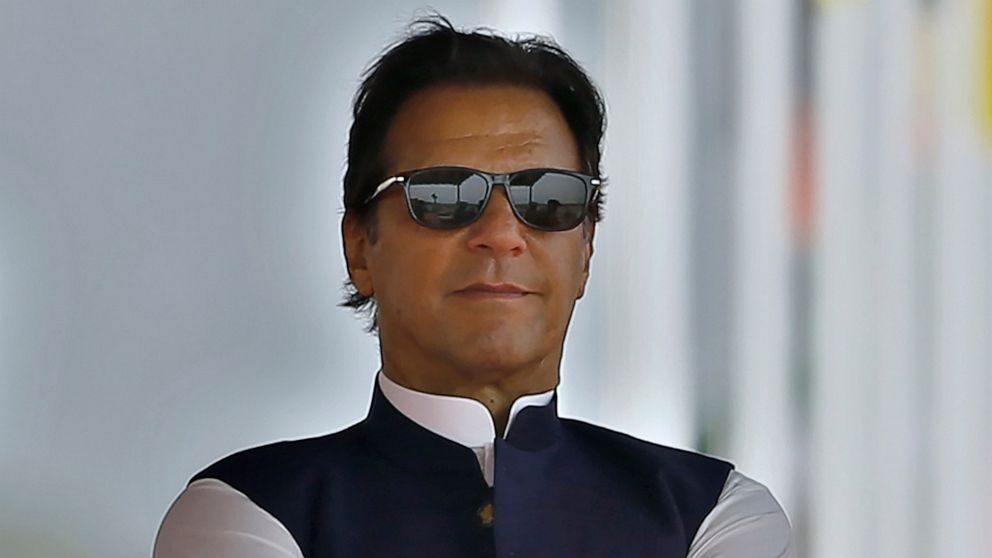 The opposition, which spans the political spectrum from leftists to religious radicals, will form a new government. The head of one of the largest parties, a brother of disgraced former Prime Minister Nawaz Sharif, is likely to take over as prime minister if confirmed in a vote Monday.

Anticipating his loss, Khan, who charged the opposition colluded with the United States to unseat him, has called on his supporters to stage rallies nationwide on Sunday. Khan’s options are limited, though. Should he see a big turnout in his support, he may try to keep the momentum of street protests as a way to pressure Parliament to hold early elections.

Khan earlier had tried to sidestep the vote by dissolving Parliament and calling early elections but a Supreme Court ruling ordered the vote to go ahead.

The vote comes amid cooling relations between Khan and Pakistan’s powerful military, which many of his political opponents allege helped him come to power in general elections in 2018. The military has directly ruled Pakistan for more than half of its 75 years and wields considerable power over civilian governments.

In seeking Khan’s ouster, the opposition had accused him of economic mismanagement as inflation soars and the Pakistani rupee plummets in value. The vote caps months of political turmoil and a constitutional crisis that required the Supreme Court to step in.

In an impassioned speech Friday, Khan doubled down on his accusations that his opponents colluded with the United States to unseat him over his foreign policy choices, which often seemed to favor China and Russia and defied the U.S.

Khan said Washington opposed his Feb. 24 meeting with Russian President Vladimir Putin in the Kremlin. The meeting took place hours after Russian tanks rolled into Ukraine, launching a devastating war in the heart of Europe.

Ahead of the vote, a member of Khan’s Cabinet referred to an earlier claim by Khan that Pakistani diplomats in Washington were told by a senior U.S. official that relations would improve if Khan was ousted.

Human rights minister Shireen Mazari told Parliament that the purported memo by the U.S. official stated that “all would be forgiven” if Khan was out of power. She went on to ask: “Forgiven for what? What is our sin?”

The U.S. State Department has denied any involvement in Pakistan’s internal politics. Deputy State Department spokeswoman Jalina Porter told reporters on Friday there was “absolutely no truth to these allegations.”

Still, Khan urged his supporters to take to the streets, particularly the youth who have been the backbone of his support since the former cricket star turned conservative Islamist politician came to power in 2018. He said they needed to protect Pakistan’s sovereignty and oppose alleged U.S. dictates.

“You have to come out to protect your own future. It is you who have to protect your democracy, your sovereignty and your independence. … This is your duty,” he said. “I will not accept an imposed government.”

Khan’s allegations of U.S. involvement are likely to resonate with many in Pakistan, says Michael Kugelman, deputy director of the Asia Program at the Washington -based Wilson Center.

“Khan’s conspiracy allegations will resonate in a country where there’s a tendency to ascribe the worst possible motives to U.S. policy, especially because there is a past history of U.S. meddling in Pakistani politics,” said Kugelman.

Khan’s allegations of U.S. involvement in attempts to oust him also exploit a deep-seated mistrust among many in Pakistan of U.S. intentions, particularly following 9/11.

Washington has often berated Pakistan for doing too little to fight Islamic militants, even as thousands of Pakistanis have died at their hands and the army has lost more than 5,000 soldiers. Pakistan has been accused of aiding Afghanistan’s Taliban insurgents while also being asked to bring them to the peace table.

The no-confidence vote loss for Khan brings to power some unlikely partners.

Among them is a radically religious party that runs scores of religious schools. The Jamiat-e-Ulema-Islam, or Assembly of Clerics, teaches a deeply conservative brand of Islam in its schools. Many of Afghanistan’s Taliban and Pakistan’s own homegrown violent Taliban graduated from JUI schools.

The largest among the opposition parties — the Pakistan People’s Party, led by the son of slain former Prime Minister Benazir Bhutto, and the Pakistan Muslim League — have been tainted by allegations of widespread corruption.

Pakistan Muslim League leader and former Prime Minister Nawaz Sharif was convicted of corruption after being named in the so-called Panama Papers. That’s a collection of leaked secret financial documents showing how some of the world’s richest hide their money and involving a global law firm based in Panama. Sharif was disqualified by Pakistan’s Supreme Court from holding office. The new prime minister is expected to be Sharif’s brother Shahbaz Sharif after a vote for the new prime minister is held in Parliament on Monday.

“This would be the first time in Pakistan’s history that a no-confidence vote succeeds in ousting a Prime Minister — the fulfilment of a constitutional process that was far from guaranteed after Khan’s attempts to derail the vote,” said Elizabeth Threlkeld, Pakistan expert at the U.S.-based The Stimson Center. “That, in itself, is significant, and could give Pakistan something to build on going forward.”