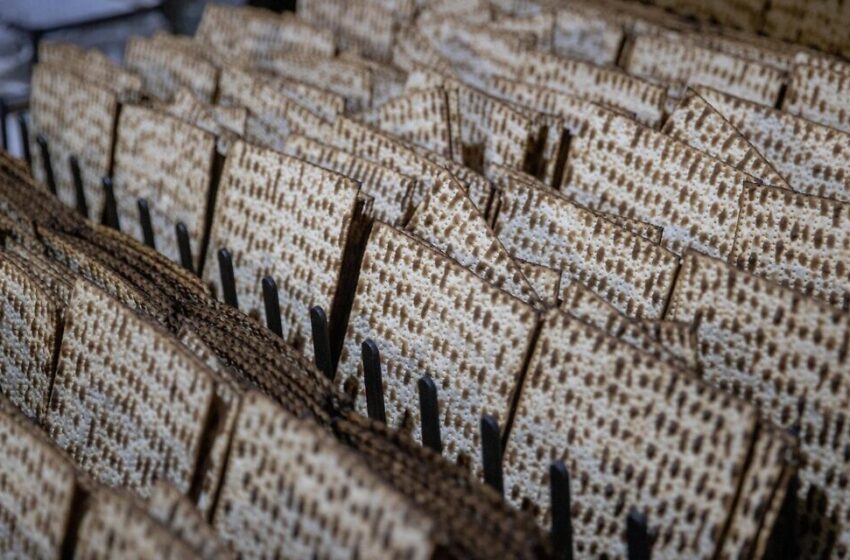 Once it was F-15s on Shabbat; now, hametz: The religious issues that end governments

MK Idit Silman’s resignation this week, in part over the issue of leavened goods, or hametz, in public spaces during the Passover holiday, joined a long list of Israeli governments breaking apart or falling entirely over religious issues.

Such conflicts date back to the very early days of the state, when disagreements over military service for women and education prompted the dissolution of the country’s third government.

And they continue until today, with the thorny issue of ultra-Orthodox enlistment in the Israel Defense Forces serving as the ostensible reason staunchly secular Yisrael Beytenu party leader Avigdor Liberman refused to join then-prime ministerial candidate Benjamin Netanyahu’s coalition in 2019, which denied — and continues to deny — the then-premier a majority in the Knesset.

This week the issue was hametz in hospitals. For years, certain hospitals instituted strict prohibitions on bringing in outside food during the Passover holiday, including bag searches to ensure no contraband entered, but these bans were ruled illegal in a 2020 court case. The court ruling was in effect last year as well, largely without provoking comment, but this year Silman took issue with a missive sent by Health Minister Nitzan Horovitz instructing hospitals to abide by the ruling, perceiving in his order further proof that her left-wing coalition partners were damaging “to our values and standards that are essential and pure,” as she put it in her resignation letter.

In some cases, these religious conflicts are part of deep, sustained philosophical debates; in others, a one-off incident becomes the hill that religious parties choose to die on, though it may look — from the outside at least — like an insufficient reason to bring down a coalition.

“But why are these issues good excuses [for rocking the political boat]? Because at the end of the day, the essential, significant, persistent argument in Israel between the different groups is about the Jewish identity of the state. That is the underlying question — from which many other questions that divide us originate,” Yedidia Stern, president of the Jewish People Policy Institute think tank, told The Times of Isreal.

According to Stern, this question of the Jewish identity of Israel, which often plays out in fights over religion and state, is the fundamental dividing issue in the country, what separates right-wing and left-wing, secular and religious. This has been the case since the founding of the state and it is liable to continue into the foreseeable future.

“These issues are persistent ones in Israel,” he said. 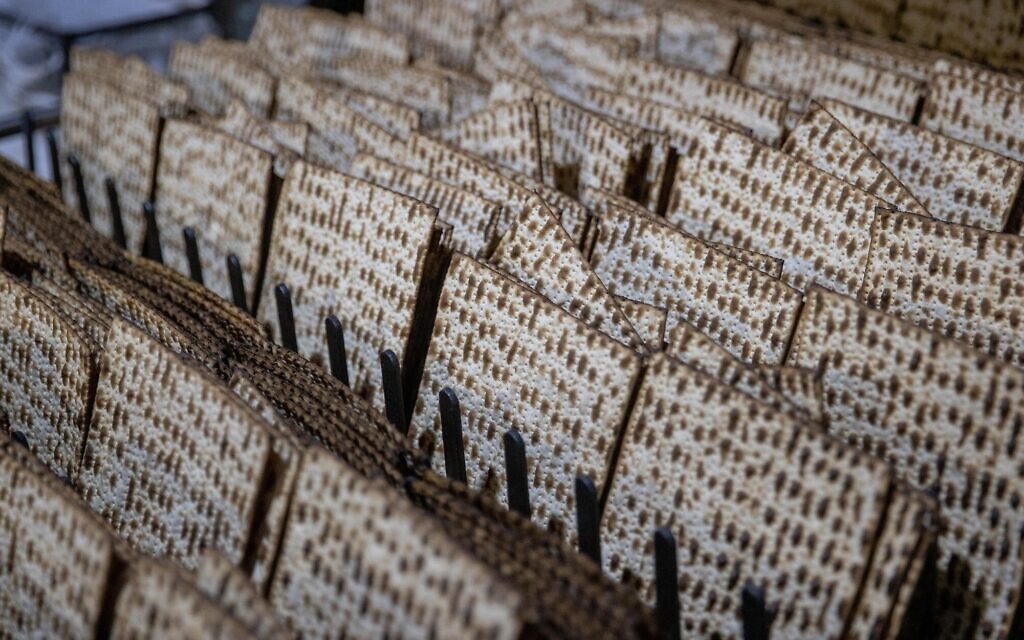 Illustrative: Workers prepare matzah for the upcoming Jewish holiday of Passover at the “Yehuda Matzos” plant in Jerusalem on March 16, 2021. (Yonatan Sindel/Flash90)

And yet most Israeli politicians rarely make these issues central to their campaigns, focusing instead on high-priority issues like security and the economy, with the notable exception of ultra-Orthodox parties, “which will die for religion-and-state issues and compromise on everything else,” Stern said.

This is because of how deeply these issues divide the country, he said. Any politician seeking broad appeal risks alienating at least some portion of the electorate if they take too clear a stand on issues pertaining to the country’s Jewish identity.

Stern laments that Israeli leaders have therefore increasingly turned these issues into legal, judicial matters rather than into questions that can be resolved politically. The issues of hametz, ultra-Orthodox military enlistment, non-Orthodox conversions to Judaism, and more have been resolved by the High Court of Justice, not through political debate.

But while these issues do not necessarily lead campaign platforms, they have nevertheless brought down or split up governments, beginning early in the country’s history.

Women in the IDF and religious education

In 1952, Israel’s third government, which initially included ultra-Orthodox parties, confronted the religious issue twice. First, it passed an amendment to the conscription law in August of that year, which made it more difficult for women to get out of military service on religious grounds. In response, the two ultra-Orthodox, or Haredi, parties in the government — Agudat Yisrael and Poalei Agudat Yisrael — left the coalition, leaving then-prime minister David Ben-Gurion without a majority, controlling only 60 seats in the 120-seat Knesset. This was also the last time that Haredi parties were part of a government for the next 25 years, until Menachem Begin’s election in 1977.

Following their resignations, the government muddled along but ultimately fell a few months later, when it attempted to update and formalize the nascent state’s education system. At that time, the country had what was known as the “stream system,” in which different sects of the population — socialist workers, ultra-Orthodox, “general,” and Sephardic — were each independently responsible for educating their children. The government looked to formalize the country’s education system with a law that would bring those disparate school networks under state control. 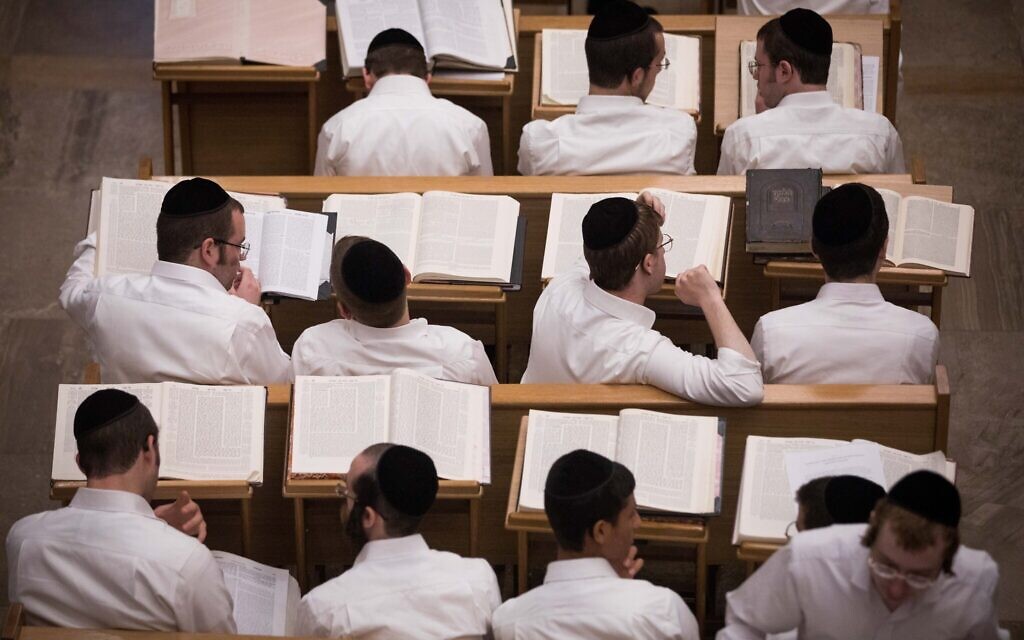 Fearing that this would lead to an abandonment of their religious values and an imposition of secular, socialist ones, religious parties opposed the measure ferociously, leading to Ben-Gurion tendering his resignation in December of that year and dissolving the government.

The planes were too late

The F-15 fighter jet is one of the backbones of the Israeli Air Force and Israel’s air superiority in the Middle East. They were used to bomb the Iraqi nuclear reactor in 1981 and the Syrian nuclear in 2007, and they remain in use today, albeit having undergone significant upgrades and having effectively become different airplanes.

It was this very aircraft — or at least the arrival of them in Israel — that brought down Yitzhak Rabin’s first government, Israel’s 17th government, leading to the election of Begin the following year in the first victory for a non-socialist party in Israel’s history.

On December 10, 1976, Israel was scheduled to receive the first batch of these American-made planes. Some 3,000 people attended the reception ceremony, which was held on a Friday afternoon, a few hours before the beginning of Shabbat at sundown. The event was supposed to end before the day of rest began, but the planes were delayed and the ceremony ran late, ending — depending on whom you ask — either just before Shabbat came in or just afterward. In either case, most of the audience at this official government event were forced to violate the Sabbath and travel home on Shabbat. 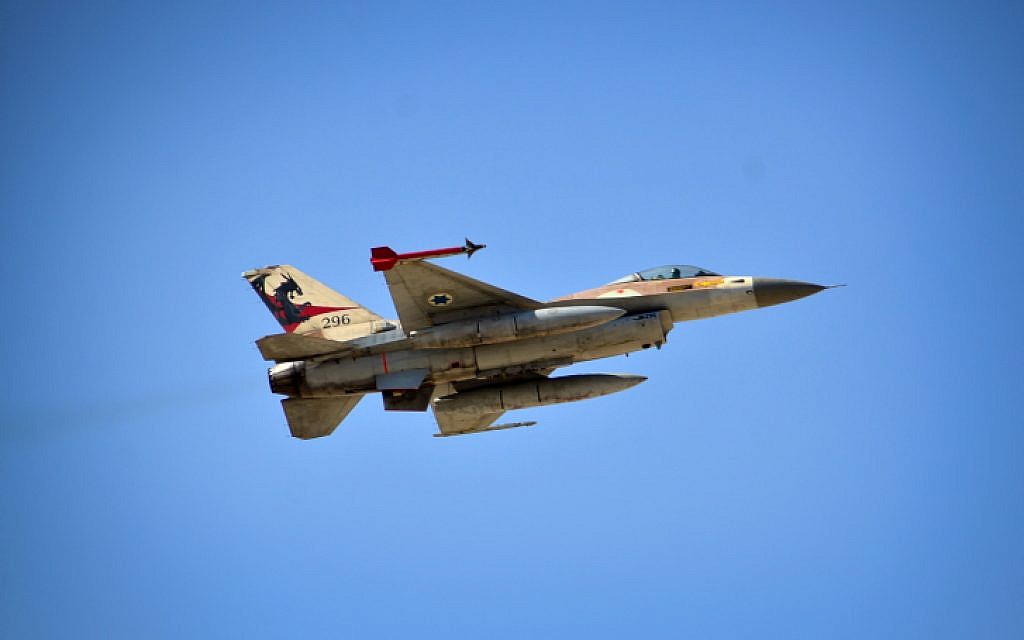 Illustrative: An IAF F-16 from the Red Dragon squadron during a drill, November 2013. (IDF Spokesperson’s Unit/Flash90)

When the opposition called for a no-confidence vote, the National Religious Party, which was part of the government, abstained instead of voting against. Furious, Rabin booted them from the coalition, ending his majority in the Knesset and prompting fresh elections.

In August 1999, a massive new turbine needed to be moved from outside Tel Aviv to a power station near Ashkelon on the southern coast. As it took up three lanes of the highway and could only travel at a snail’s pace, the decision of when to transport the turbine became a massive headache for then-prime minister Ehud Barak’s government.

Moving the turbine on a weekday was expected to result in a severe traffic jam on one of Israel’s busier highways. Instead, Barak planned to move it on Shabbat, a time when there are far fewer cars on Israel’s roads in general and when virtually none of that traffic is work-related.

The proposal met heavy backlash from the two Haredi parties in Barak’s coalition, the Ashkenazi United Torah Judaism, which had five seats, and the Sephardi Shas party, which had 17.

Despite the threats from within his coalition, Barak ordered the Sabbath transport to go ahead, and the 250-ton turbine made its way to Ashkelon on August 14, 1999. 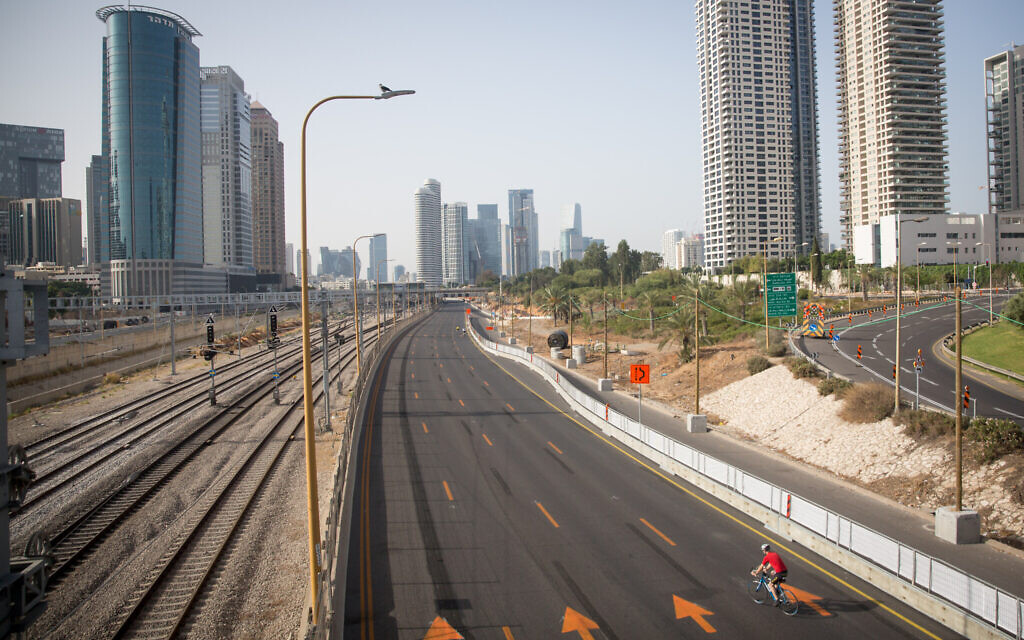 United Torah Judaism made good on its threat and left the government in protest of the Shabbat desecration. But Shas stayed, allowing Barak’s government to keep going for another year, until the outbreak of the Second Intifada brought it down.

The conflict over Haredi conscription has been lurking in Israeli politics for decades, popping up occasionally to destabilize coalitions. In 2019, it emerged as the purported key issue preventing a right-wing government from forming, indirectly causing the ongoing political impasse that gripped the country for the following two years and that arguably still exists today.

For decades the ultra-Orthodox effectively had a blanket exemption from military service for young men who were studying full-time in a religious seminary, or yeshiva, unlike all other Jewish Israelis who were required to enlist or perform some other form of recognized national service.

With the number of yeshiva students growing disproportionately at the end of the 20th century, the practice was successfully challenged in court in 1999 because it gave the defense minister the power to issue exemptions without the legal authority to do so. A committee was formed to consider the matter and draft a bill that would allow the government to legally exempt Haredi yeshiva students from having to serve in the military without falling afoul of the country’s anti-discrimination laws. 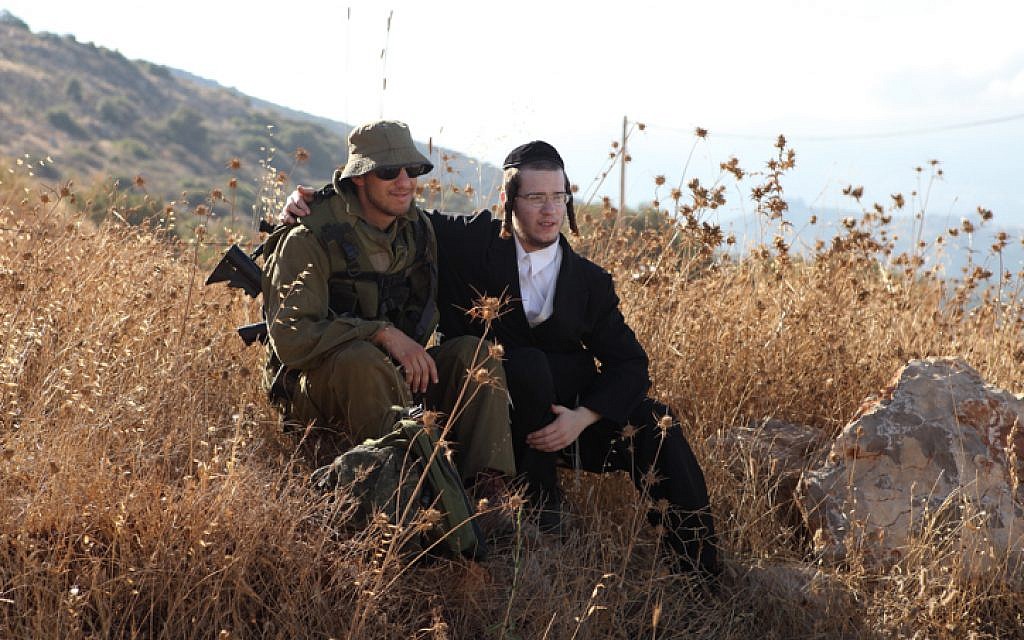 Illustrative: Soldiers of the IDF’s ultra-Orthodox Netzah Yehuda Battalion sit in a field at the Peles Military Base, in the Northern Jordan Valley. (Yaakov Naumi/Flash90)

No government has ever succeeded in threading that needle, however. Though there have been multiple laws passed that aimed to do so, each of these has eventually been struck down, forcing the issue back into the Knesset for often vicious debate.

Such was the case in 2012, when the so-called “Tal Law” was overturned by the High Court. Fearing the new proposed Haredi enlistment bill would not sufficiently force ultra-Orthodox Israelis to serve in the military — or penalize them for not serving — then-deputy prime minister Shaul Mofaz and his Kadima party left the government. However, the coalition was large enough to handle the loss      and the government trudged on without him.

The issue remained hotly contested after the following government, which did not include ultra-Orthodox parties, passed a law that Haredi lawmakers saw as beyond the pale. When the Haredi parties joined the subsequent government, they rolled back the aspects of the law they saw as most objectionable. Their formulation, however, was also struck down by the High Court of Justice in 2017, forcing the government to again find a way to exempt ultra-Orthodox men from having to serve in the military without it being deemed discriminatory.

Then-defense minister Avigdor Liberman formed a committee to consider the matter. It presented its proposal in 2018, meeting fierce criticism from ultra-Orthodox officials, and Liberman made its implementation a condition of his joining Netanyahu’s coalition after the April 2019 elections.

Unable to convince either Liberman or the ultra-Orthodox to back down, Netanyahu failed to form a government, forcing the country to go back to fresh elections that September. Those too failed to produce a clear winner. Only after subsequent elections in March 2020 was a government formed, albeit a short-lived one, which fell apart after less than a year.

The elections called after that, in March 2021, yielded the current diverse coalition still desperately clinging to power. But that one too is now on the verge of tripping over the third rail of Israeli politics: religion.