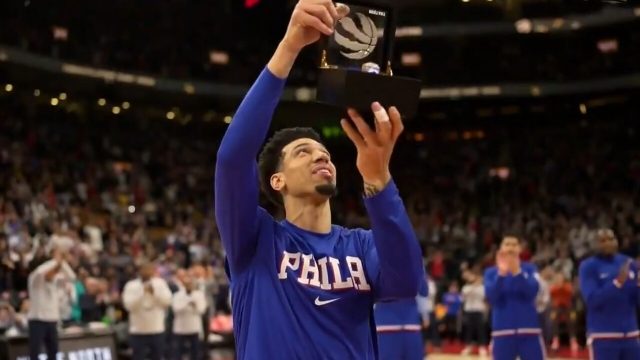 Welcome to limbo. It’s not half bad.

After months of grinding their way to a playoff spot, the Toronto Raptors have an eternity before they next play a game that matters. Or at least it feels that way. Having guaranteed themselves to finish no worse than sixth and no better than fifth in the Eastern Conference standings, Toronto knows their fate, they just don’t know the who they share it with.

The Philadelphia 76ers arrived at Scotiabank Arena as one of three possible opponents when the playoffs start the weekend after next, with Milwaukee and Boston as the other possibilities.

Which explains why Raptors head coach Nick Nurse isn’t too concerned about whether his team keeps their lead over sixth-place Chicago or if the Bulls (who hold the tiebreaker over the Raptors) come back from down a game-and-a-half to take over the fifth spot.

“I’m trying to find a reason why it does [matter] other than fifth sounds better than sixth,” said Nurse. “But I think there’s so much uncertainty about any of it, and it doesn’t really matter anyway.”

Regardless of where they finish or who they play, the story will be the same: The Raptors will start the playoffs on the road against a good team.

Nurse’s only wish – apart from good health – was that his club stays sharp over the final three games, even if they don’t carry a big weight in the standings.

“I hate to get in that mind to say the consequences aren’t [important]” Nurse said. “To me, we want to win and we want to play really well, period.”

Thus the most important development for the evening was that former Raptor Danny Green getting his 2019 championship ring.

It took a while. Green signed with the Los Angeles Lakers for the 2019-20 and the Lakers never made it to Toronto before play was paused for the pandemic. He’s been with Philadelphia the past two seasons and made it known that he wanted to get his ring at Scotiabank Arena in front of a full house. That ruled out him getting recognized last season when the Raptors were in Tampa.

This season it looked like Dec. 28th would be the day, but Green ended up getting COVID and the Raptors were ultimately required to play without fans, so Green would have likely pushed it back anyway.

The moment finally arrived and Green was given his bauble, which features 640 diamonds, was – at the time deemed – the largest championship ring by weight, the one with the most diamonds, and with the largest single diamond.

Worth the wait, in other words.

As for the rest?

Mission accomplished as the Raptors rose to the occasion for a 119-114 win over the Sixers that improved their record to 47-33 with two remaining and solidified their grip on fifth place.

Led by another dominant performance by Pascal Siakam who finished with 37 points, 11 rebounds and 12 assists, outplaying fellow Cameroonian Joel Embiid, who had 30 points and 10 rebounds for the Sixers.

Toronto won its second straight and for 13th time in its last 16 games as the team finishes the season on a heater. Siakam’s signature moment – or one of many – was a big pump fake that got Philadelphia’s MVP candidate in the air, helpless as Siakam laid it in softly to put Toronto up six with just under two minutes to play.

Just to be sure, Siakam bullied his way to a three-point play to put the Raptors up seven with 32.1 seconds left to seal the win. The only drama was whether Siakam would get his second triple-double in a week. He did that with eight seconds to spare to record just the fourth 30-point triple-double in franchise history.

There were M-V-P chants when Siakam was at the free throw line, and why not?

Siakam has been that good, showing over and over again that he’s becoming the type of player that can toy with defences as he controls the pace with his ball-handling and can attack to score or create at a whim, depending on what the defence provides.

There were plenty of helping hands, however, as Gary Trent Jr. added 30 points in his best game since the All-Star break and Scottie Barnes continued to make his case for Rookie of the Year with 13 points and 10 rebounds.

Meanwhile, Precious Achiuwa, who got the start when the Raptors opted to rest Fred VanVleet, proved once again that his post-All-Star surge could be a thing as he finished with 20 points while going 5-of-7 from three, part of a 15-of-33 attack from deep which was needed as the Sixers went 19-of-36, led by Green who shone in his old gym with a 6-of-7 night from deep.

Siakam put on a clinic in the third quarter as he led all scorers with 15 points on 7-of-10 shooting, mostly while operating from the middle of the floor as he kept the Sixers defenders on a string. When they sent another defender, the ball was out of his hands and into those of a teammate for a good look. Siakam counted 12 points and two assists in a six-minute flurry to close the third quarter, giving Toronto an 87-85 lead to start the fourth.

With some leeway over the final weekend of the season and five or six days off before their series would start, the Raptors will be looking to rest some key players. VanVleet was looking to get his ailing knee right before the games that matter. The hope is that OG Anunoby – who missed his third straight game with a bruised thigh – could be ready to play Sunday in New York, the last game of the regular season. With the Raptors playing on the second night of a home back-to-back against lowly Houston on Friday, chances are a fair number of regulars will be in street clothes or on reduced minutes.

Green got the start in part after the Sixers had to leave Matisse Thybulle in Philadelphia because he’s unvaccinated and unable to cross the border. It could be a factor if the two teams meet in the first round which would be the case based on the standings before the tip. Thybulle is Philadelphia’s best wing defender and would be unavailable from Games 3 and 4 of a seven-game, first-round series.

In that case, Green is a more than capable back-up. At 36.9 per cent on just over four three-point attempts a game off the bench, Green is still a threat although he hasn’t shot as well from deep as he did in Toronto when he connected on 45.5 per cent, second in the NBA among those with at least five attempts per game. But he’s still a threat and remains a determined individual defender and smart in a team concept.

“I always called him a glue guy for that team, which is an important thing,” said Nurse. “A veteran who won a lot, was a great pro, was available. I don’t think he felt the greatest a lot during the season, but he always wanted to go out there and play, loved to play. And he brought a lot of winning qualities to the team.”

Certainly, the Sixers are happy to have the four-time NBA champion in their lineup.

“He’s been around winning, he knows the characteristics of [winning] teams,” said Sixers head coach Doc Rivers. “He knows how hard it is to win, he knows all the stuff that it takes. I say it all the time, people have no idea how hard winning is.

“You guys [Toronto] won it couple of years ago and you realize that. It’s so brutally hard to win one, it just is.

Danny’s done it several times in his career, four or five, I don’t even know how many he has. Just remarkable but each time when we talk about it, he’ll tell you, the first thing I think of when I’m done is how hard it is. How many things have to go your way. Breaks you have to get. One-point games. Loose balls. It comes down to all that stuff.

The fact that he’s been on the right side of that, that many times is pretty impressive.”

Green got the Sixers rolling as he hit a corner three moments after the ring ceremony where Siakam and VanVleet presented him with his jewelry at centre court in front of an appreciative crowd. And the Sixers kept rolling. Philadelphia hit their first five shots – all of them threes – as they sprinted out to a 17-2 lead in the first five minutes of the first quarter. But even short-handed, the Raptors kept at it. Siakam scored seven quick points and found Chris Boucher for a dunk. Siakam ended up with 11 points in the quarter as Toronto went into the second period trailing 33-26, even though the Sixers were 7-of-9 from deep.

Toronto took the lead as they got hot from deep, with Gary Trent Jr. hitting a pair of triples around one by Chris Boucher. Another by Achiuwa put the Raptors up five as the big man was all over the court – hitting the floor to recover a loose ball before getting up and sprinting out on the break to finish a pin-point pass from Siakam with a dunk. He had nine in the quarter, but  Philadelphia finished the half with a 20-11 surge to take a 60-56 lead into the half.

But it was the Raptors’ night from there, led by some of Green’s old teammates who seem determined to prove that they still have some of that championship feeling close at hand.