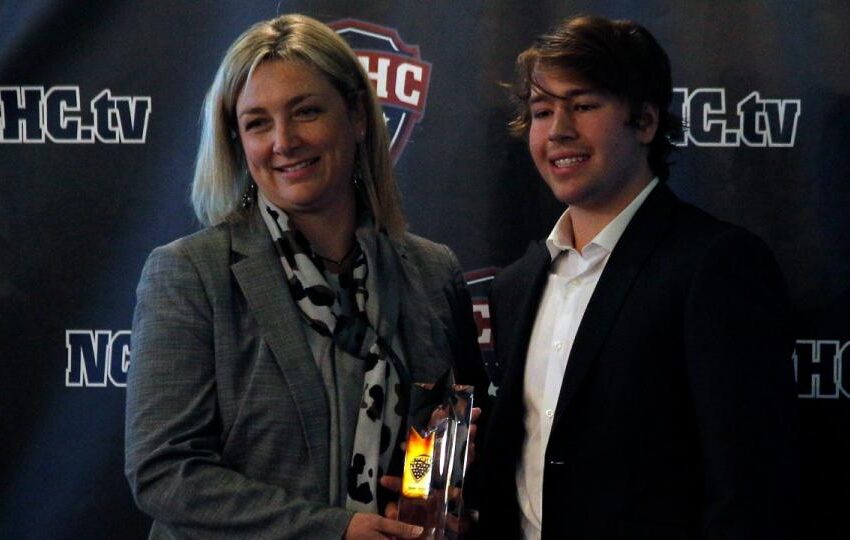 The 2022 Frozen Four is oozing with more talent than college hockey fans have ever seen. It’s not always that the “best” teams in the NCAA make it to the Frozen Four. That’s what makes the event so special, any team can win at any time.

While that’s still true, the four teams headed to Boston to compete for a national title are four of the top five ranked teams. Minnesota State, Michigan and Denver finished the regular season ranked No. 1, 2 and 3 respectively in the USCHO polls and Minnesota was No. 5.

As a result, we do have the best teams in Boston, meaning we have some of the best players in college hockey competing.

In the past, typically it’s the older, more veteran groups that are able to get to the final stage, relying less on individual talent and more on team chemistry.

MORE: When is the Frozen Four 2022? Dates, TV schedule, locations, odds and more for the NCAA Tournament

That’s not the case this season.

Between the four teams, there are 41 NHL draft picks at the Frozen Four, nine of which are first-round selections. To put it in perspective, the 2021 tournament featured 18 draft picks and none of the 2017, 2018 or 2019 Frozen Fours had more than 30.

With so much talent on display, it’s going to be worth watching every player competing in the Frozen Four. But for now, here are the top 10 players that will be playing for the college hockey national championship. 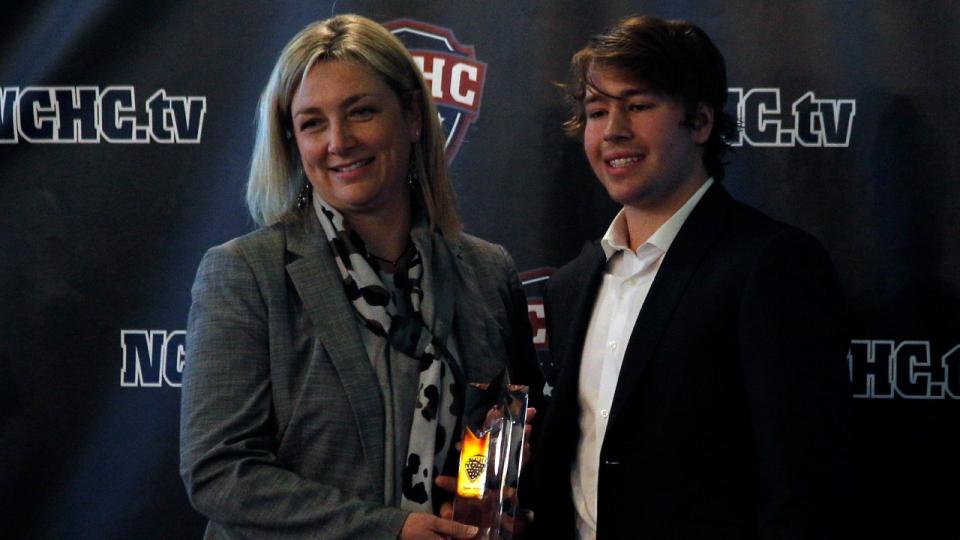 Brink has been consistently one of the top players all season long in college hockey. It comes as no surprise that as Brink and Denver enter Frozen Four weekend, he is one of the three finalists for the Hobey Baker Award as the top college hockey player this season.

The Flyers second-round pick from 2019 has the most points in college hockey this season with 56 and the most assists with 42. He is six points ahead of the player in second and has eight more assists than the player behind him, as the junior forward has been a key cog in the Pioneers’ offense.

Brink earned NCHC Player of the Year and NCHC Forward of the Year honors and was the lone unanimous selection to the All-NCHC First Team. His 35 points in conference play also tied a conference record for points in a single season. 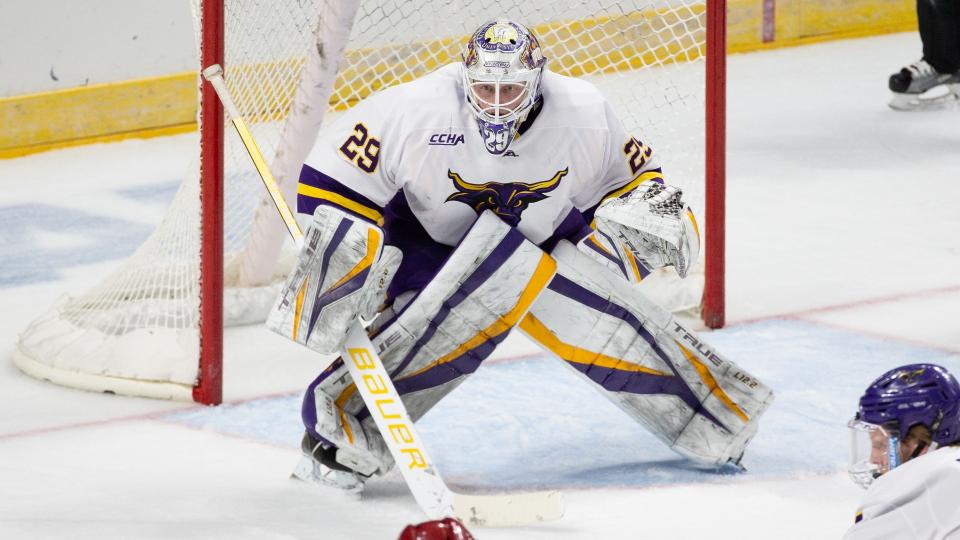 When you talk about top goaltenders in college hockey over the last four years, McKay’s name is at the top of the list. He’s been a consistent and calm presence in Minnesota State’s net since he joined the Mavericks in 2018.

In his fourth season as Minnesota State’s starter, McKay had the most wins in the country with 37, starting in every game except for one. He broke the NCAA career record for shutouts in October by surpassing Ryan Miller’s mark of 26. He heads into the Frozen Four with 10 shutouts this season, sitting in a tie for second in the country. His career shutouts are at 34 and counting.

McKay’s 1.28 goals-against average ranks second in the nation and his .934 save percentage sits in a tie for third. He was named the CCHA Player of the Year and Goalie of the Year, as well as being honored with an All-CCHA First Team selection. 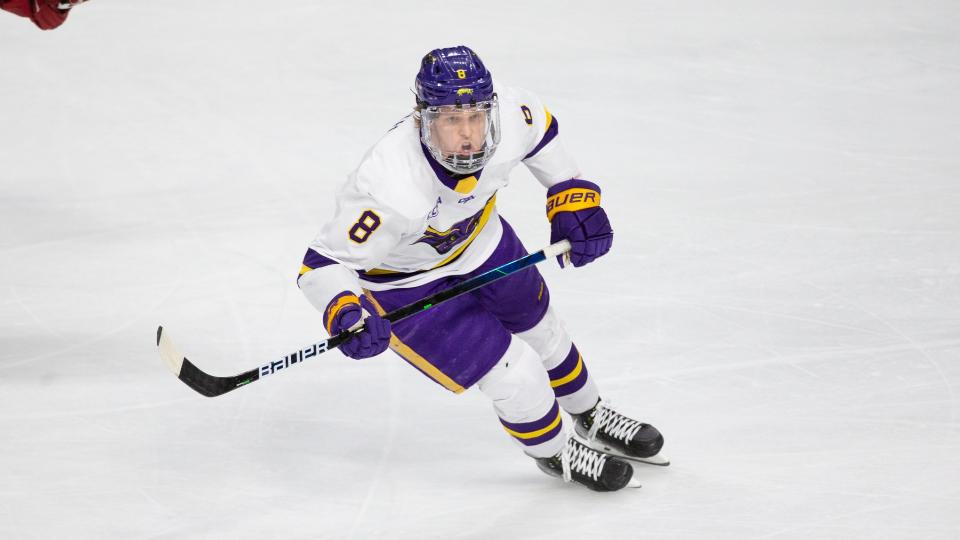 While McKay is getting it done in the crease, Smith has been a crucial part of Minnesota State’s offense. The junior forward was neck-and-neck with Brink for most of the season for the points lead in college hockey.

Smith is second behind Brink in points with 50 and points per game with 1.39. His 31 assists put him in a three-way tie for the team lead and his 19 goals are second on the Mavericks. There’s a strong chance his numbers would have been even better had he not missed four games during the season to play for the United States at the Winter Olympics.

He was honored as the CCHA Forward of the Year after finishing second in conference play in points-per-game (1.50), third in points (33), fifth in goals (13) and sixth in assists (20). Smith also finished in the top-10 in Hobey Baker voting. 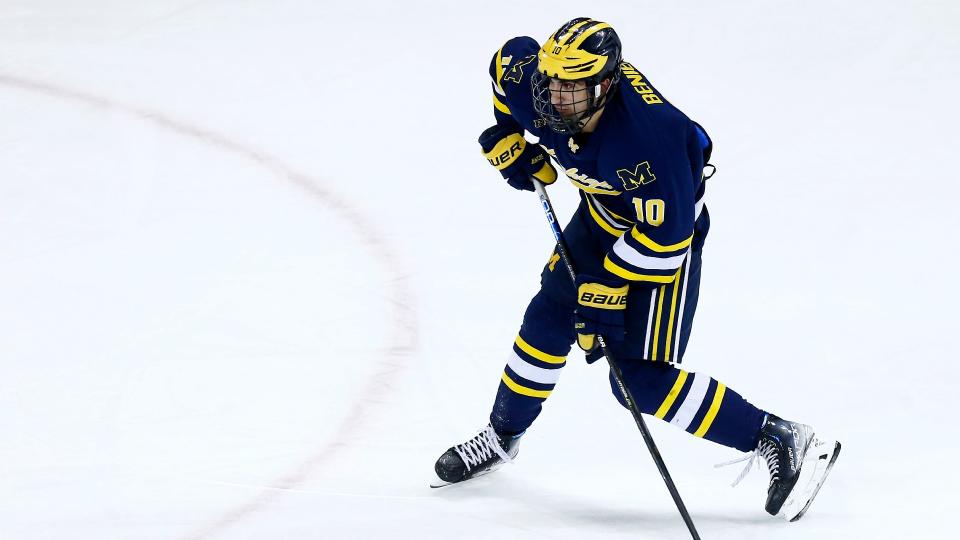 One of the headlines of a deep and talented Michigan roster is Beniers. The sophomore was selected with the No. 2 pick in the 2021 NHL draft by the Kraken last summer.

Beniers has proven that Seattle made the right choice this season, leading the Wolverines in points with 43. His 20 goals are second on the team and his 23 assists are fourth. He’s shooting at a jaw-dropping 22.7% in 2021-22. He finished the regular season as the conference Scoring Champion with his 27 points in 20 conference games, in addition to being a unanimous vote to the All-Big Ten First Team. 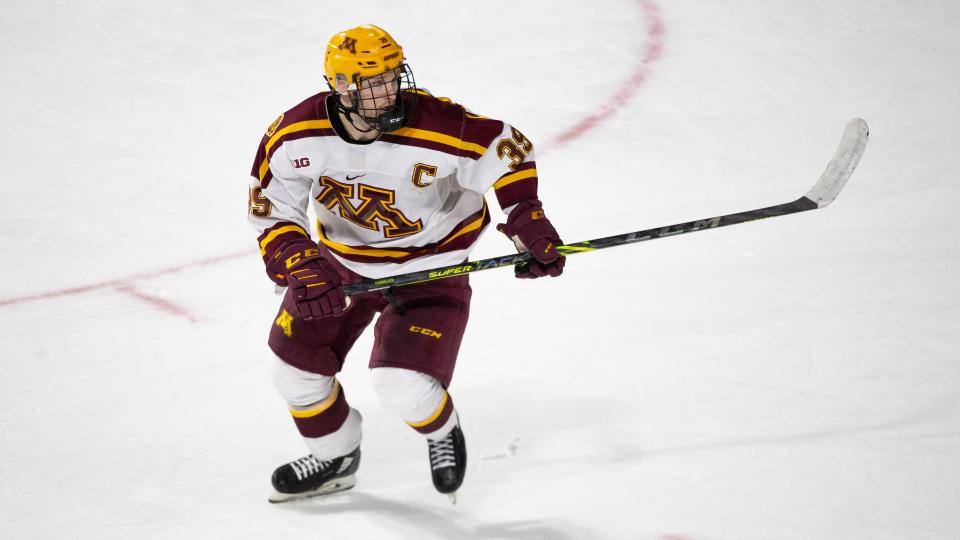 Meyers is the third finalist along with Brink and McKay for the Hobey Baker Award after a strong showing in his junior year. And Minnesota would not be in the Frozen Four without him.

The captain of the Golden Gophers potted the overtime winner in the regional finals against the reigning champions UMass to punch the team’s ticket to Boston. He’s been far and beyond their best player down the stretch, leading the team in points (41) and goals (17) and second in assists with 24 and was honored as the Big Ten Player of the Year and earned a unanimous All-Big Ten First Team selection.

Meyers has been red-hot leading into the Frozen Four. The undrafted college free agent is riding an eight-game point streak heading into the national semifinals, with seven goals and nine assists during that span. 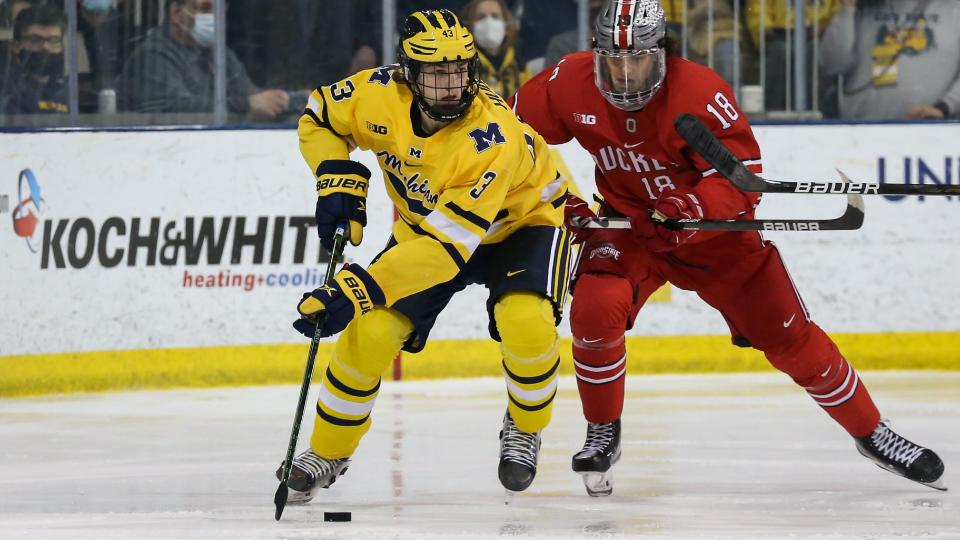 The brother of NHL stars Quinn and Jack Hughes has made quite a name for himself this season in his freshman year at Michigan.

The No. 4 pick in the 2021 draft is first among college hockey defensemen in goals this season, potting 17 which is good enough for third-most on the team. Hughes also shared the sugar dished out 22 assists this season. His 39 points rank third on the Wolverines and fourth in the Big 10.

Hughes earned Co-Rookie of the Year in the Big Ten, sharing the honors with Ohio State’s Jakub Dobes. He was also selected to the All-Big Ten Second Team.

MORE: Who has won the most Frozen Four championships? List of past winners of NCAA men’s hockey tournament 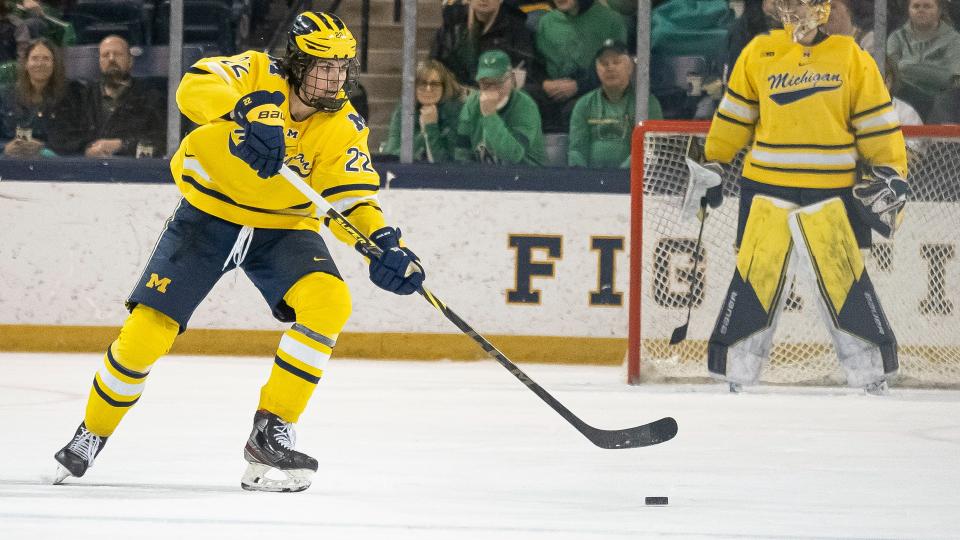 There’s an argument to be made that Power should be higher up on this list, but based on this season, Power might not have been the best defenseman on his own team. Still, the No. 1 pick in the 2021 NHL Draft brings a ton of talent to the Frozen Four on the loaded Michigan team.

Power took a major step forward this year, doubling his points total from last season. He has 32 entering the Frozen Four, good for sixth on the team. His 29 assists were tied with Kent Johnson for the most on Michigan and his 49 blocks ranked first.

The Sabres prospect earned All-Big Ten First Team honors and comes to the Frozen Four fresh off a career-high four assists in the regional finals win over Quinnipiac. 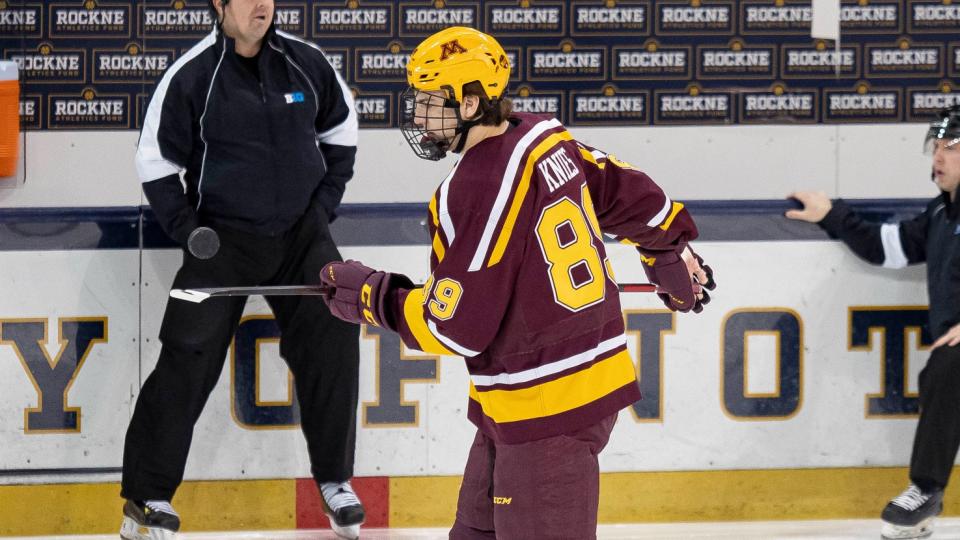 The Maple Leafs draft pick has been a point-per-game player for the Golden Gophers with 32 points in as many games, good for third on the team. Knies is first on Minnesota in power-play goals with five and his 14 goals are tied for second on the club. 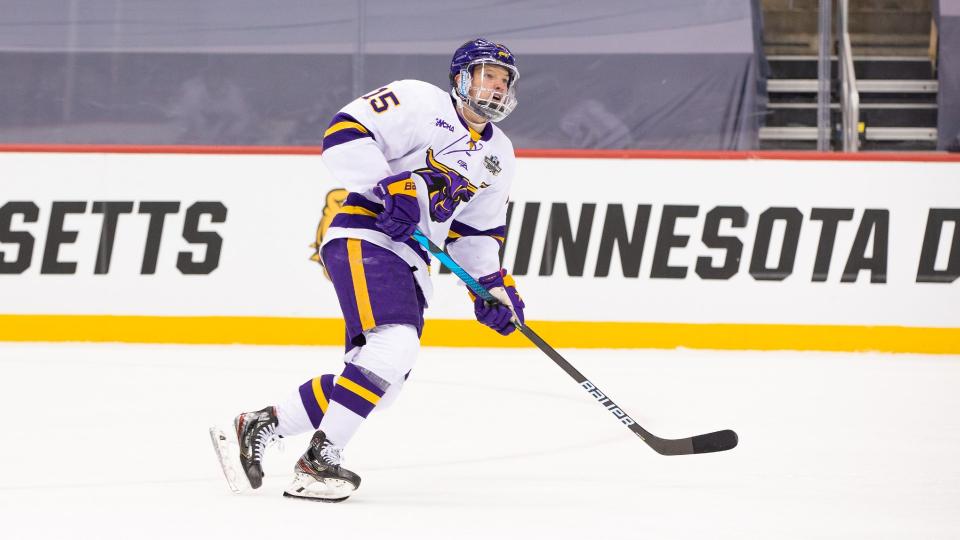 Nathan Smith might be the more well-known name out of Minnesota State, but right behind him in production is Napravnik.

The German forward is one point behind Smith with 49 points and has the same amount of assists (31) and one less goal (18). He’s tied with UMass’ Bobby Trivigno for third in the nation in points and is sixth in college hockey in points per game, scoring at a clip of 1.29 PPG.

Napravnik was one of the four Mavericks to receive All-CCHA First Team honors. He went pointless in the two regional games, but that doesn’t mean he’ll be quiet in the Frozen Four. 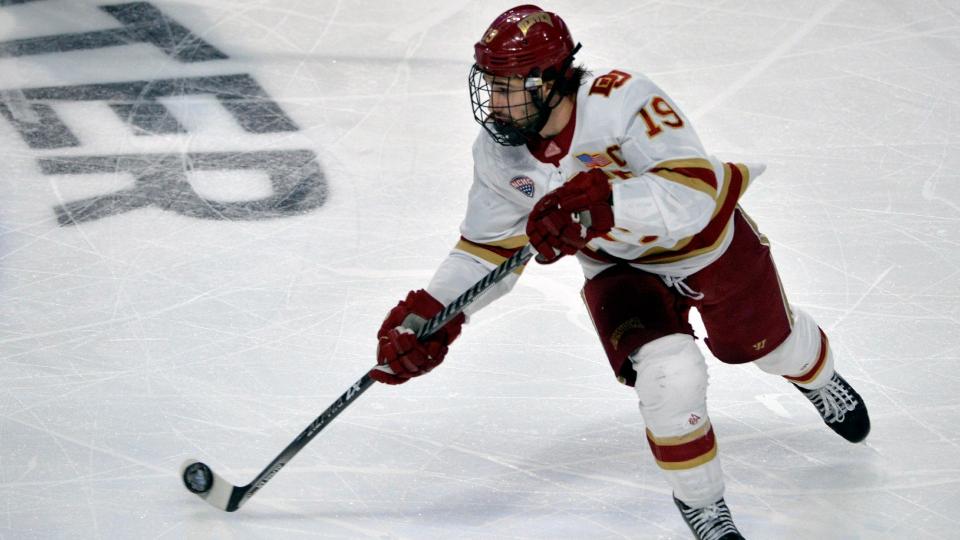 The best faceoff man that is in Boston this weekend is the captain of the Pioneers. Guttman’s 556 faceoff wins trail only North Dakota’s Connor Ford for the most in the country. In total, the senior has won 62.5% of draws this season.

Guttman is tied for sixth in the country in points with 45. On the Pioneers, he is second in goals (19) and assists (26) and was first among forwards in blocked shots with 30.

For his efforts, the Lightning draft pick was selected as an All-NCHC Honorable Mention. He potted a goal and an assist in the win over Minnesota Duluth in the regional finals.