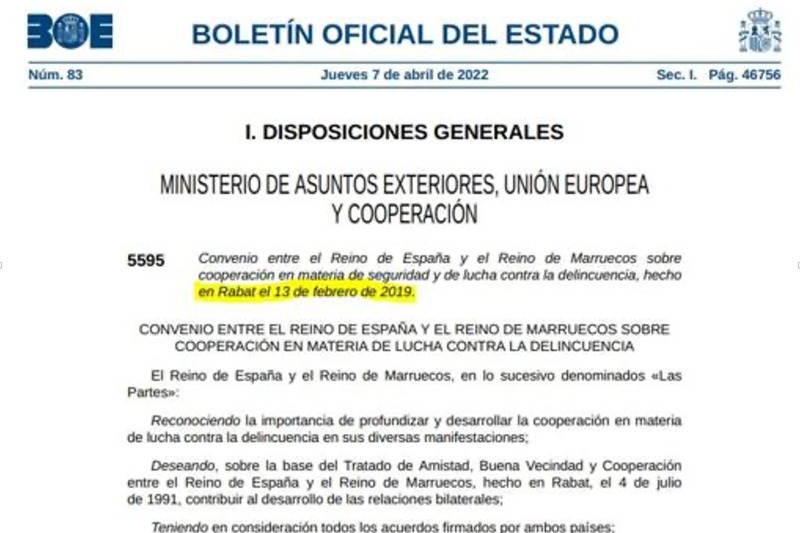 Morocco has just reactivated the security agreement with Spain which was kept frozen for three years because of relations not at their peak with the government of Pedro Sanchez and a complex agenda and other circumstances that the two kingdoms prefer by the current times classify in oblivion.

The agreement was concluded on February 13, 2019, in Rabat, by the Minister of the Interior, Fernando Grande-Marlaska, and his Moroccan counterpart, Abdelouafi Laftit, reports the daily ABC in its latest edition. Barely entered into force the agreement had been blocked or shelved in the middle of the greatest diplomatic crisis between Spain and Morocco.

These recent modalities of entry into force demonstrate the coincidence with the new approach of the Spanish executive and Pedro Sanchez. Indeed, it is said, Morocco has unblocked the agreement, which will allow it to enter into force on April 30, as published in the BOE (Official Bulletin).

The cooperation agreement in the fight against crime provides for the fight against 18 types of criminal acts: Terrorism, including collaboration and financing, Crimes against the life and physical integrity of persons, Illegal detention and kidnapping, Crimes against the property, Illicit trafficking in narcotic drugs, psychotropic substances and precursors, Trafficking in human beings and illegal immigration, Sexual exploitation of minors and the production, distribution or possession of material with pornographic content with the participation of minors, Extortion , Theft, trafficking and illegal trade in arms, ammunition, explosives, radioactive substances, biological and nuclear materials, dual-use goods and other dangerous substances.

It is also indicated in the agreement: Money laundering and illegal financial transactions, Crimes in the economic and financial field, counterfeit currency, Counterfeiting and alteration of means of payment and securities, as well as their dissemination and use, Offenses against objects of a cultural nature with historical value, as well as theft and illegal trafficking of works of art and ancient objects, Theft, illicit trade and falsification and fraudulent use of motor vehicle documents, Forgery and illegal use of documents identification, Crimes committed through computer systems, Crimes against natural resources and the environment.

The agreement further provides for the exchange of information and the provision of assistance in operational investigative activity in the identification and search of missing persons, the investigation and search of persons who have committed or are suspected of having committed crimes on the territory of one or other of the parties for the investigation of which they are competent, as well as of their accomplices, the identification of bodies and persons of police interest, to seek in the territory of one of the parties of the objects, effects or instruments resulting from the crime or having been used in its commission at the request of the other party, the financing of criminal activities.

There will also be collaboration for the exchange of information on the general situation and trends in crime in the two respective states or the use of criminal technology, as well as methods and means of criminal investigation, the exchange of brochures, publications and the results of scientific research surveys in the fields covered by this agreement.

“Each of the parties may reject, in whole or in part, or place conditions on the fulfillment of the request for assistance or information, if it considers that the fulfillment of the request represents a threat to its sovereignty or national security. or that it is in contradiction with the fundamental principles of its legal order or with other essential interests”, it is further underlined.

This Agreement is stipulated for an indefinite period and will remain in force as long as one of the two parties does not denounce it through the diplomatic channel. If reported, six months after receipt of note.