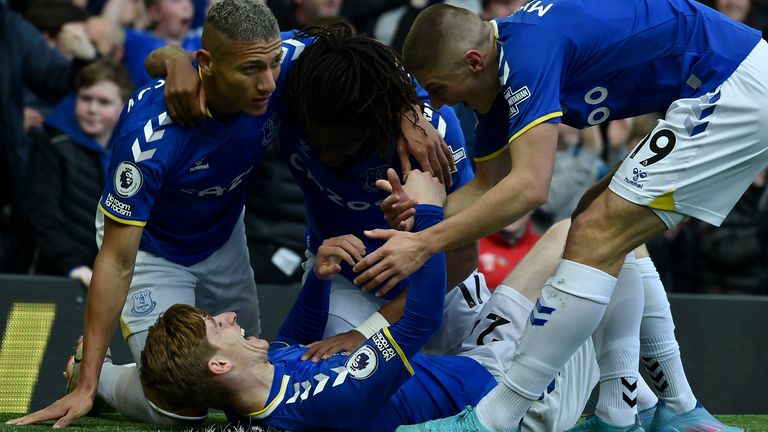 Gordon’s shot deflected off Harry Maguire’s back (27) beyond David de Gea to provide the hosts with the slice of good fortune that has deserted them so often in this torrid campaign.

United, who are close to appointing Erik ten Hag as their new manager, struggled to find their rhythm thereafter as the returning Cristiano Ronaldo’s late booking for petulance typified another disjointed, lethargic display under interim boss Ralf Rangnick.

He may have had the final say when he collected Maguire’s header across goal in stoppage time but his instinctive shot was kept out by the excellent Jordan Pickford.

After self-imploding at Burnley in midweek, Frank Lampard’s side re-established a four-point gap on Burnley in the final relegation position ahead of the weekend’s remaining games as United suffered another blow to their flickering hopes of a top-four finish.

All five of Lampard’s victories have come on home soil, and it is here at his famous old ground – at its most visceral, obstructive and unwelcoming on Saturday – where Everton’s best hope of staving off a first relegation in 71 years reside.

Man of the match: Anthony Gordon.

The Spirit of the Blues

Lampard’s future had been brought into question following Wednesday’s 3-2 defeat at Burnley having lost eight of his opening 12 games in all competitions since he replaced Rafael Benitez at the end of January, when the club were 16th and four points above the relegation zone.

The former Chelsea midfielder said he “knows the rules” regarding the short shelf life of a manager not picking up results and he was indebted to Pickford in the opening 12 minutes as Marcus Rashford twice forced the England goalkeeper into fine saves to his left.

But for all of United’s early pressure, it was the hosts who took the lead in the 27th minute with their first real sight at goal.

Cristiano Ronaldo and Marcus Rashford were restored to Manchester United’s starting line-up for the visit to Everton in Saturday’s early Premier League kick-off. Ronaldo missed last weekend’s 1-1 draw against Leicester because of illness while Rashford was among the substitutes but both forwards came back in as Ralf Rangnick made six changes to his starting XI.

Victor Lindelof, Alex Telles and Aaron Wan-Bissaka came into United’s backline while Nemanja Matic was restored to the midfield. Raphael Varane, Scott McTominay and Luke Shaw were out injured while Diogo Dalot, Paul Pogba and Anthony Elanga dropped to the bench.

Michael Keane and Allan were back from suspension for struggling Everton, who also brought Seamus Coleman and Fabian Delph back, with Jonjoe Kenny, Jarrad Branthwaite, Abdoulaye Doucoure and Mason Holgate dropping to the substitutes’ bench.

A move down the left started by Allan and involving Richarlison was followed by the ball being cut back to the edge of the area by Alex Iwobi and Gordon’s sidefoot effort took a deflection off Harry Maguire, wrongfooting David de Gea before rolling into the net.

The goal roused the Everton players, as well as the crowd, as the momentum swung dramatically, with Michael Keane heading over while another deflected shot, this time from Richarlison, had to be tipped over by De Gea.

Fred looked to be struggling and was withdrawn in the 37th minute as Paul Pogba was introduced. Everton would see out the half, and Pogba’s first contribution was to hack at Everton’s goalscorer Gordon right in front of referee Jon Moss to be cautioned.

Vitalii Mykolenko was wiped out by Aaron Wan-Bissaka but Moss played the advantage as Gordon’s shot on the slide was crucially blocked by Victor Lindelof. Juan Mata hadn’t played a single minute in the Premier League, but Rangnick summoned him and Anthony Elanga in a double change shortly after the hour-mark.

Everton had barely led at home for a sustained period of time since beating Leeds 3-0 on February 12 given Iwobi’s winner against Newcastle came in the 97th minute – but here they were disciplined and picking their moments to sense a second with Gordon snapping into a challenge on Alex Telles but unable to pick out Richarlison with his low cross.

Ben Godfrey and Michael Keane blocked, they headed, they kept their heads this time.

Only once, right at the end did time stand still as Ronaldo collected Maguire’s header back across goal for one last show of defiance from Pickford as he saved ice hockey-style, lifting up a big right glove.

Goodison poured with emotion at the sound of the final whistle. Never has the Spirit of the Blues been sung from all corners with such gusto.

Everton boss Frank Lampard: “I’m very proud. Pressure times. The reality of the situation. At Goodison we have been good. We are getting clean sheets at home. When we come together with fans and players we are hard to beat here.

“It starts with us. The crowd were great but they could switch off if they see people not working. When you are not at your best you have to fight through it. You might give a ball away but the only way to get that back is to fly in and make a tackle.

“Beautiful football can come later on. I have ambitions for this club to stay up, play well, but in the position we are in, fighting comes first and foremost.

“We have missed Delph. It goes unnoticed. If we have one or two defensive midfielders out it’s tough for us as we don’t have that there. He gave us a sense of calm. He was great today.

“It’s one win. We should have got a result in the week but didn’t. You have to keep going. It’s not easy when you wake up the next morning after Burnley. My job first and foremost is to lift everyone. They are a good bunch these players.”

Manchester United boss Ralf Rangnick: “If you don’t score a single goal in 95 minutes we have to be disappointed. We had a good start and should have created more chances out of that domination. Then we concede a deflected shot and lost a bit of our composure.

“The second half we were trying to add creativity with substitutions but we didn’t always take the right decision.

“We had to do something. We needed a goal and we decided to bring Mata and more verticality with Elanga. They were defending with their players in the last 35 minutes. We didn’t find the right player at the right moment. We didn’t have enough players in the box when we played crosses.”

“It’s not only creativity. I think we had enough creative players on the pitch. It’s also about being physical enough in the final third, being physical and trying to score a goal. We didn’t have enough players in the box.”

On United’s top-four hopes, he added: “It’s difficult. As long as we don’t win our own games it doesn’t make sense to hope for good results from the other teams.

“Fred had some muscular problems on his hip flexor. We already are without McTominay. Without both defensive midfielders it isn’t good for us.”

The imminent announcement of Ten Hag could well be viewed as an unwanted distraction for Rangnick, but he said: “I don’t think this should be an excuse. We are Manchester United. We have lots of international players. There shouldn’t be an alibi. There will be a new manager next season. If this is announced now or in 10 days it shouldn’t have an impact.”

So much change yet so much still the same at United

This high-stakes clash was the polar opposite to the encounter between Liverpool and Manchester’s other club this weekend. Man City vs Liverpool represents a meeting of two of the game’s greatest minds, a masterpiece between the league’s title protagonists in a class of their own.

By contrast, Goodison Park hosted a festival of the doomed involving two clubs in desperate need of a reset. But Everton are not dead. This was a step in the right direction.

It was this month three years ago that they produced arguably their best performance of the Farhad Moshiri era against Manchester United, outclassing them 4-0 to provoke a memorable rebuke from Gary Neville.

The defeat exposed all the problems facing Ole Gunnar Solskjaer. A fifth successive away defeat for the first time since 1981 would contribute to their failure to qualify for the Champions League.

“I’ve often said that clubs over the last seven years, if you’ve got weeds in the garden, then you’ve got to get rid of them,” said Neville.

“But there’s some Japanese knotweed at that football club and it’s attacking the foundations of the house. It needs dealing with properly.”

So much has changed and yet so much has stayed the same at United, who look no closer to competing for the big prizes.

Man of the match – Anthony Gordon

Gordon has been directly involved in five goals (four goals, one assist) in his last six Premier League starts at Goodison Park, while he’s either scored (4) or assisted (1) five of the Toffee’s last seven home goals in the competition.

The England Under-21 international looks set to a long and successful career but he may not score a more important goal in the years ahead.

“You can see by the results we get here,” he told BT Sport. “We definitely feed off the fans and are a better team with them. They are a top team with top players at the front end of the pitch so we did really well to keep a clean sheet.

“The gaffer always says you make your own luck by working hard and winning the ball back. I made my own luck with a bit of hard work.

“I can only speak for myself but I’m really sore and have had a few kicks.”