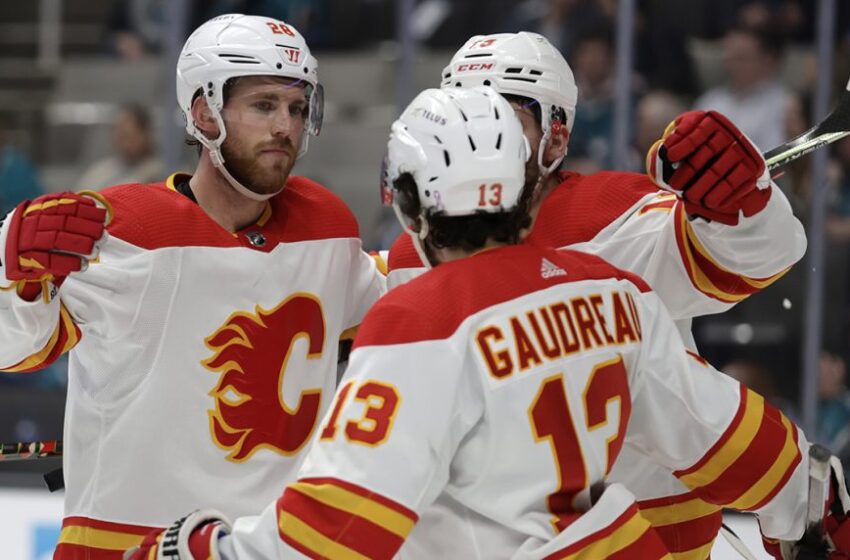 Lindholm scores goals No. 37 and 38 as Flames beat Sharks

Nick Bonino and Logan Couture scored for San Jose, which lost its fifth in a row. James Reimer made 32 saves before leaving with an injury in the third period following a collision with Couture in the crease. He was able to skate off under his own power. Kaapo Kahkonen stopped all five shots he faced in relief.

Tkachuk opened the scoring for Calgary at 7:19 of the first period with his 33rd goal of the year.

Bonino answered with his 10th a little more than seven minutes later, but Lewis put the Flames back in front with his fifth of the season in the final minute of the opening period.

Lindholm made it 3-1 with 6 1/2 minutes left in the second period with his team-leading 37th of the year. Couture tallied his 23rd on the power play at 5:24 of the third to bring the Sharks within one.

Lindholm added his 38th with an empty net in the final minute to secure the win.

Flames LW Johnny Gaudreau picked up two assists to give him 99 points for the season, fourth-most in the NHL. He could become the ninth Calgary player ever to reach 100 points and the first since Theo Fleury in 1992-93.

END OF AN ERA

Thursday morning, the Sharks announced that general manager Doug Wilson was stepping down after 19 seasons because of a medical issue that placed him on leave in November.

“While I have made great progress over the last several months, I feel it is in the best interest of the organization and myself to step down from my current duties and focus on my health and full recovery,” Wilson said in a statement. “I look forward to continuing my career in the NHL in the future.”

Wilson, 64, guided the Sharks to the playoffs 14 times, including five trips to the conference finals and a Stanley Cup Final appearance in 2016.

Joe Will has taken over since Wilson went on leave and will continue in the role until San Jose hires a full-time replacement.

NOTES: Lindholm is the first Flames player to score at least 38 goals in a season since Jarome Iginla, who scored 43 in 2010-11. … Sharks LW John Leonard (foot) and LW Jonah Gadjovich (hand) were both out after blocking shots last game and leaving early.

Flames: At Seattle on Saturday to finish a four-game road trip.

Sharks: At Vancouver on Saturday to start a five-game road trip.