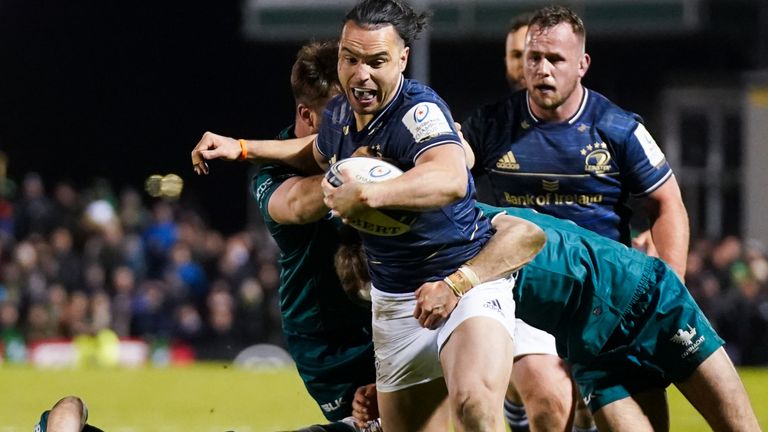 Connacht remain alive in their Heineken Champions Cup round-of-16 clash with Leinster despite a 26-21 first-leg defeat at the Sportsground.

Two James Lowe tries in the space of four minutes saw Leinster lead 18-11 at half-time, the visitors finding their groove in the second quarter after John Porch’s early effort had provided the fireworks for Connacht.

Leinster captain Jonathan Sexton kicked the other eight points, but Jack Carty’s second penalty just before the break pleased most of 8,129 sell-out crowd.

Although Hugo Keenan’s 52nd-minute try cancelled out another Carty penalty, Connacht capitalised on Jamison Gibson-Park’s sin-binning when Leva Fifita crashed over on the hour mark.

Despite Leinster initially regaining their poise, Aki forced a turnover penalty to delight the home crowd.

Sexton knocked over his opening penalty in the 18th minute, and Leo Cullen’s men hit the front just four minutes later when Keenan’s switch pass released Lowe through a gap to score from 35 metres out.

Sexton’s conversion was quickly followed by Lowe’s second score, the expected loop move not materialising as Keenan cut past Aki and his return pass put the Nelson-born winger over despite Porch’s last-ditch tackle.

A Luke McGrath interception paved the way for Sexton to restore the 10-point gap, but Cian Healy infringed late on and Carty duly hit the target from 41 metres out.

Turning into the wind, Connacht restarted at a high tempo and Carty tagged on his third penalty, rewarding a Conor Oliver break.

Leinster wrestled back control, a prior knock-on denying Lowe his hat-trick before some scrum pressure ended with replacement Gibson-Park sending Keenan over for an unconverted try.

Referee Karl Dickson took a while to decide on a yellow for Gibson-Park, who made contact with Kieran Marmion’s head in an upright tackle. After Connacht pressed from a maul, lock Fifita scrambled over for Carty to make it 23-21.

The hosts deserved a try from some thrilling running from deep by Porch and replacement Conor Fitzgerald, while a knock-on thwarted Leinster replacement James Tracy following some brilliant work by Josh Van Der Flier.

Byrne, who slotted in for Sexton, kicked a penalty dead but, on the back of a strong Lowe carry, the replacement fly-half was called upon to go for the posts and made no mistake.