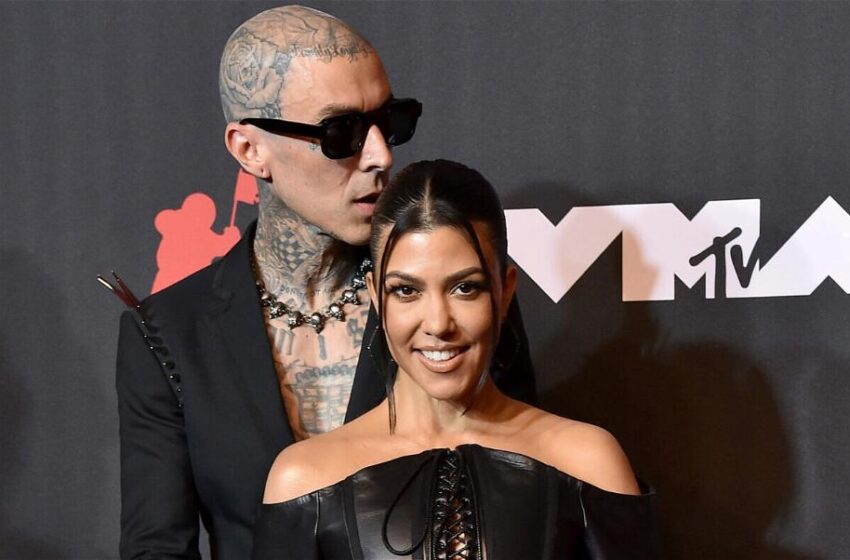 It looks like Kim Kardashian was getting some beauty sleep while her sister was at the altar!

As we all know, Kourtney Kardashian and Travis Barker didn’t really tie the knot when they got married by an Elvis impersonator in Las Vegas shortly after the Blink-182 drummer performed at the Grammys. They didn’t have a marriage license with them and it appears that most of the family wasn’t even in attendance.

In a new interview with “Jimmy Kimmel Live!” to promote their upcoming Hulu reality show, “The Kardashians,” the SKIMs founder revealed she was sleeping when the surprise wedding took place.

During the surprise wedding, matriarch Kris Jenner said, “I knew, and Khloé knew.”

“I was on FaceTime,” Khloé added.

Kim confessed, “I was sleeping.” She later added that Kourtney “put it in the group chat. Like, ‘Oh, hey guys, by the way…I got married last night!’ And I woke up to like, a million texts.”

Kourtney admitted that they did not have a license when they attended the One Love Wedding Chapel just past 1 AM on Monday morning and told Kimmel, “There was no possibility to get a marriage license at that hour. We asked like five times, ‘What do we have to do to make this happen?’ It was 2 a.m., and they were like, ‘It opens at 8 o’clock.’ ”

The Poosh founder admitted that they didn’t get legally married on Wednesday when she posted a statement on her Instagram page along with a few snaps of the pair.

“Found these in my camera roll,” she wrote in the caption. “Once upon a time in a land far, far away (Las Vegas) at 2am, after an epic night and a little tequila, a queen and her handsome king ventured out to the only open chapel with an Elvis and got married (with no license). Practice makes perfect.”

The One Love Wedding Chapel owner, Marty Frierson, told PEOPLE their wedding ceremony was only about thirty minutes long, and said he didn’t recognize them at first.

“I didn’t know who it was until they pulled up,” he explained. “I advertise as 24-hours but they wanted to make sure I was still there. They paid and they requested Elvis Presley, that was mandatory. I called back 5 minutes later and was like, I got an Elvis, and there they were.”

He added, “They showed a lot of love and had a lot of fun.”

Kourtney Kardashian Opens Up On Getting ‘Physical’ With Travis Barker

During an ABC special promoting their upcoming series “The Kardashians,” Kourtney spoke to “Good Morning America” co-host Robin Roberts about their relationship.

“It’s so funny when we think about, like, this is us. Can you believe it? We’re, like, Kourtney and Travis, who are friends,” she recalled. “I felt like deep down, if we looked into each other’s eyes and made it, you know, physical, that it would just be over.”

The couple got engaged in October 2021 after dating for only nine months. Kourtney has never been married, but she was in a long-term relationship with Scott Disick. They had three children together: Mason, 12, Penelope, 9, and Reign, 7.