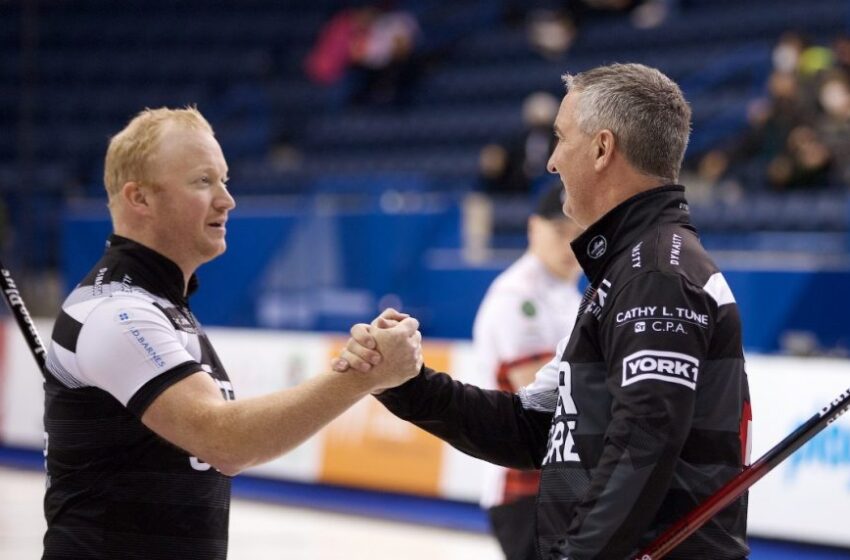 Howard picks up win over Schwaller at Players’ Championship

TORONTO — Are they Team Glenn Howard or Team Scott Howard?

With Glenn on the mend due to injury, his son Scott has moved up from third to skip the Penetanguishene, Ont., squad this week in the Princess Auto Players’ Championship. Wayne Middaugh, who was already at the event coaching Team Hasselborg on the women’s side, got the call off the bench to rejoin Team Howard to throw third stones.

That improved Team Howard’s record to 1-1 in the B Event of the triple knockout preliminary round while Team Schwaller (0-2) fell into the C Event and must win Thursday to avoid early elimination.

The triple knockout consists of three brackets: A, B and C. Teams must win three games in order to qualify for the playoffs. Each loss drops a team to a lower bracket until they lose three games and are out of the tournament. Two A teams (3-0 records), three B teams (3-1 records) and three C teams (3-2 records) advance to the quarterfinals.

Elsewhere, Team Brad Gushue of St. John’s, N.L., also remained in the B bracket following a 10-3 victory over Saskatoon’s Team Colton Flasch (0-2). Trailing by one, Gushue (1-1) scored five in the fifth end and stole three in the sixth to get into the win column.

Teams cannot tick guards off of the centre line while the five-rock, free guard zone is in effect. Following an infraction of the rule, the non-offending team may decide to leave the situation as is.