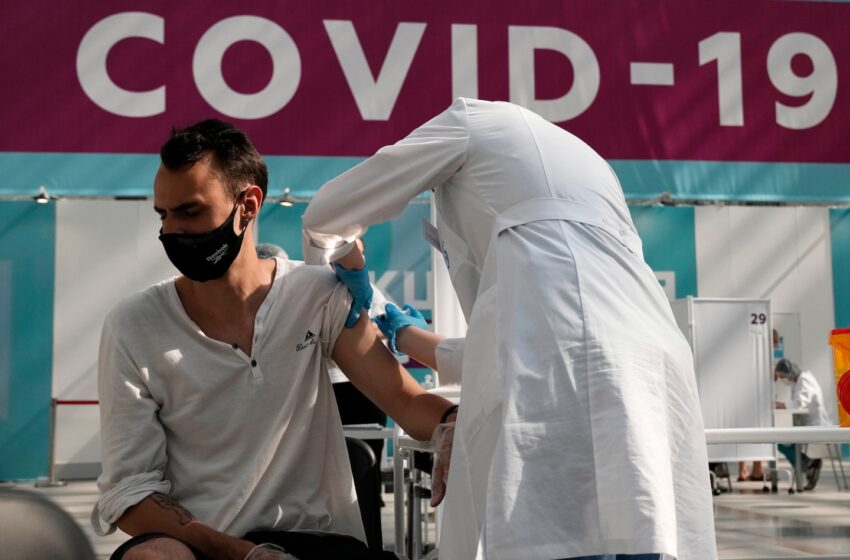 Manufacturing of the vaccine has slowed, further research is stalled and a much-anticipated March 7 visit by the World Health Organization to Russia’s Sputnik manufacturing plants, the last step in its long-awaited international approval process, was once again delayed — this time indefinitely.

While Russia’s efforts are focused on Ukraine, other vaccine makers are moving forward. They are filling a void that — only a month before the war — two Russian entities hoped to fill: the Gamaleya Research Institute of Epidemiology and Microbiology, which developed the vaccine; and its partner, the Russian Direct Investment Fund (RDIF).

It is an inauspicious fall for a vaccine whose arrival stunned the world.

On Aug. 11, 2020, only six months into the pandemic, Russia became the first country to approve a coronavirus vaccine.

Russia hoped its vaccine would be used worldwide to help stop the pandemic, that the shot would bring geopolitical and economic gains and restore its glory as a superpower, lost with the fall of the Soviet Union. The country named its vaccine Sputnik V after the first artificial satellite, Sputnik I, developed in 1957, which beat out the United States in the space race.

Sputnik V has been approved in 71 countries with more than 4 billion people, and its newest jab, Sputnik Light, has gained recognition in 30 nations, according to data provided by Sputnik.

But nearly two years later, Gamaleya and RDIF have sold fewer than 300 million doses, and less than 2.5 percent of the people vaccinated worldwide have taken a Sputnik shot, according to data from the World Trade Organization.

By contrast, China’s Sinovac and Sinopharm vaccines — with lower reported efficacy — have accounted for more than 5.3 billion doses, the WTO data shows.

“Russia’s vaccine diplomacy has failed,” Agathe Demarais, global forecasting director and trustee for the Economist Intelligence Unit, said. “Gamaleya was looking toward a big PR push to save the vaccine. I understand they believe in it from a scientific perspective, but obviously, the current situation goes beyond science.”

Just as Gamaleya and RDIF were trying to rehabilitate their vaccine in February with new research promoting it as a universal booster, Russia invaded its western neighbor. Four days later, the United States sanctioned RDIF, and in March, the European Union followed suit.

When the U.S. Department of the Treasury’s Office of Foreign Assets Control placed RDIF and its chief executive officer, Kirill Dmitriev, on the list of sanctioned Russian entities and people, it labeled RDIF a “slush fund” of Putin and “emblematic of Russia’s wider kleptocracy.”

The Treasury Department said in a statement that RDIF was being sanctioned for “acting or purporting to act for or on behalf of, directly or indirectly, the Government of Russia.” It added that “Dmitriev is a close associate of Putin and he and his wife are also believed to be close to one of Putin’s daughters, Katerina Tikhonova.”

RDIF pushed back in a statement published by Russia’s state-run Tass news agency, accusing the United States of “slander.” It said the U.S. curbs were politically motivated and “ran counter to the principles of humanitarian cooperation,” according to Tass, adding that the U.S. sanctions would deprive billions of people of its “safe and efficient” vaccine.

In a separate letter sent last week to The Washington Post, RDIF’s general counsel, Mikhail Irzhevsky, stressed that the sovereign wealth fund “always fully complies with laws of the countries where it conducts its investments” and that “defamatory and denigrating statements made by the Biden Administration about RDIF have absolutely no basis and represent a blatant violation of the Fund’s rights.”

He added that RDIF supports the restoration of peace and hopes that negotiations between Russia and Ukraine will come to a successful conclusion.

“RDIF and its international partners believe that only diplomacy can end this conflict and save human lives,” Irzhevsky said.

In an interview, the head of the Gamaleya Institute, Alexander Gintsburg, accused the international community of punishing Russia. Two days before the war began, Gintsburg said that if the vaccine was not approved, it was because the authorities in other countries didn’t want it to be and “not much of a scientific question.”

“I believe Sputnik V poses serious competition to the vaccines that are currently broadly used in the world and basically dominating the international market,” Gintsburg said. “The approval of Sputnik V by the World Health Organization would result in a large share of the market going over to Sputnik V and the Russian Federation that is promoting it.

“Most probably,” he added, “not everyone in the world, and certainly not the WHO, would be happy with this scenario, and therefore, we have seen certain delays.”

Still, contract development and manufacturing organizations that had already completed the technology transfer for the Sputnik vaccine and did not require raw ingredients from Gamaleya should be able to move forward. In contrast, others could be stopped in their tracks — especially if a Russian entity still holds the vaccine license.

Restrictions on Russia’s use of the SWIFT financial network mean it would be hard for foreign governments or nongovernmental organizations to pay for Sputnik doses.

Local media in South Korea, which had hoped to produce 100 million doses a month, reported in March on concerns that Sputnik production there would be set back.

The German state of Bavaria, too, has said it would block production of the vaccine, even if it received approval by WHO or the European Medicines Agency, because of the invasion. A Russian firm had set up a production facility there to produce millions of doses.

“It is inconceivable from our point of view that this project can now be realized,” Bavaria’s minister-president, Markus Söder, said in a public statement. “It is over.”

Mariângela Batista Galvão Simão, WHO assistant director-general for access to medicines, said in a recent news conference that the assessment and the inspections of Sputnik have been affected “because of the flight options and also because of the financial issues relating to supporting credit cards, and some more operational issues” that were tied to sanctions.

The vacuum is expected to be quickly filled by Russia’s Western competitors. Pfizer-BioNTech and Moderna are working toward completion of clinical trials on updated vaccines targeting the omicron variant. A vaccine from drugmaker Novavax recently received WHO approval.

Another hurdle for Sputnik: Research published in January from Argentina in Lancet Regional Health-Americas showed that countries in the region, many of which provided their citizens with at least one dose of Sputnik V, can safely use alternative vaccines for second doses.

In Russia, where Sputnik was the sole option, only about half of citizens are fully vaccinated. Gintsburg said the state’s promotional campaign “was not properly structured” because the push to vaccinate was “mostly by state officials and not by scientists and medical officials.” But surveys have indicated the problem had more to do with a lack of trust.

Multiple polls published last year by Levada Center, an independent polling agency, found that more than half of Russians don’t want to be vaccinated and are not afraid of the disease. Denis Volkov, Levada’s director, explained in interviews that Russians were not ready to be vaccinated “because they do not believe the authorities.”

“People do not want to get a Russian shot,” Demarais, of the Economist Intelligence Unit, said. “Even in Russia, the people will always prefer a Western shot.”

Globally, some top scientists had warned against the use of the vaccine until all internationally approved testing and regulatory steps have been taken. They also questioned Russia’s ability to develop the vaccine so quickly.

Gintsburg said Russia’s approval process is simply not “harmonized” with the WHO process.

“This does not automatically mean the product we produced is bad,” Gintsburg said. “It was just developed according to different rules.”

WHO said RDIF signed all the legal agreements necessary for the Emergency Use Listing assessment only in October 2021 and submitted the data requested at the end of January, triggering the March visit that was ultimately canceled because of the war.

“While the process is ongoing, the details must remain confidential,” WHO spokesman Andrei Muchnik said the day after the invasion. “A recommendation will be made public as soon as the full process is finalized.”

In the 30 days leading up to the Russian invasion, Sputnik looked as though it could have a comeback.

Aside from submitting the data to the WHO, the single-shot Sputnik Light vaccine was showing sufficient efficacy to become a universal booster for people inoculated with other vaccines.

Just three days before the invasion, RDIF sent out a release announcing that China had authorized mix-and-match boosting of its domestic coronavirus vaccines with a different vaccine, including from the class to which Sputnik Light belongs.

On Feb. 14, RDIF, Russia’s R-Pharm group and AstraZeneca announced interim results of phase II clinical trials to evaluate the safety and effectiveness of the combined use of AstraZeneca’s vaccine and Sputnik Light. The 200-volunteer trial showed no serious adverse events.

And a week before that, the Drug Controller General of India authorized Sputnik Light, partially based on local clinical trials.

The announcements came following release of a study of blood samples by the National Institute for Infectious Diseases Lazzaro Spallanzani in Italy that demonstrated more than two times higher virus-neutralizing activity against the omicron variant by Sputnik than by the Pfizer coronavirus vaccine.

The Ebola vaccine had been tested in about 2,000 residents of Guinea who were followed for a year-and-a-half and had no serious adverse events. First and second stage trials of the MERS vaccine had been conducted in Russia, and “we were already confident of the safety profile and the efficacy of the vaccine technology,” Gintsburg said.

But it is likely that as the war rages on, those who believed in the Sputnik solution — such as Ze’ev Rotstein, former Hadassah University Medical Center director-general in Jerusalem — will seek alternatives.

“We should condemn the violence and the devastation taking place in Ukraine,” Rotstein said. “Unfortunately, Russian technology is being used to kill people instead of to save lives.”