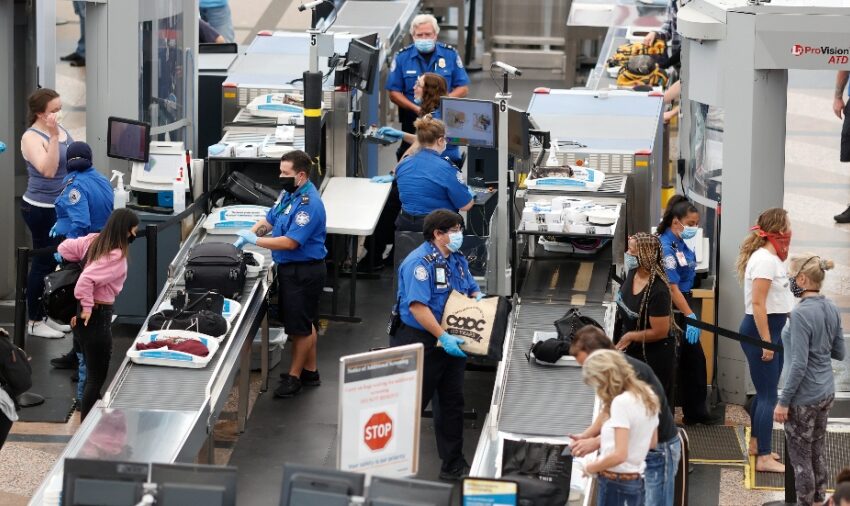 Songs by artists like Ricky Martin, Queen and the Wu-Tang Clan are set to be added to the Library of Congress.

The TSA is extending its mask mandate for another two weeks in response to the rise in cases brought on by the BA.2 variant.

Welcome to Overnight Health Care, where we’re following the latest moves on policy and news affecting your health. For The Hill, we’re Peter Sullivan, Nathaniel Weixel and Joseph Choi. Someone forward you this newsletter? Subscribe here.

The Biden administration will extend the federal mask mandate for all transportation networks through May 3, 15 days after it had been set to expire amid a new coronavirus surge fueled by the BA.2 variant.

The Transportation Security Administration’s (TSA) mask mandate for travel on airplanes, in airports, on buses and on rail systems was set to expire on April 18.

The two-week extension is from an order by the Centers for Disease Control and Prevention (CDC), based off the rise in cases from BA.2 since early April.

“In order to assess the potential impact the rise of cases has on severe disease, including hospitalizations and deaths, and health care system capacity, the CDC

order will remain in place at this time. At CDC’s recommendation, TSA will extend the security directive and emergency amendment for 15 days, through May 3, 2022,” a

This extension of the TSA mask mandate is the shortest yet. The mandate has been in place for 14 months and initially went into effect with an expiration date of May 2021.

TSA extended it a few times, most recently in March by one month. Before that, it had been extended in December before it was set to expire just after the new year.

After the two weeks, the CDC will determine what’s next for the mask mandate, White House press secretary Jen Psaki told reporters on Wednesday, leaving the door open to more extensions.

She also said she wouldn’t make a prediction on if the public should expect more of these short-term extensions.

CDC: 2021 was America’s deadliest year ever

New data from the Centers for Disease Control and Prevention (CDC) showed that more Americans died in 2021 than in any other year in the nation’s history, as the coronavirus pandemic raged and death rates attributed to cancer, diabetes and strokes rose.

The rising rate means nearly 3.5 million Americans died in the 12 months that ended in September 2021, the highest number of deaths ever recorded in the U.S. in a single year.

Much of the rising death toll was caused by the coronavirus pandemic, which cost 415,000 American lives in 2021, a higher figure than during the first year of the outbreak, even though vaccines were widely available for most of the year.

The coronavirus was responsible for more than 1 in 10 deaths in the U.S. last year, the CDC data shows.

The Biden administration on Wednesday announced new efforts and funding to improve the state of maternal health care in the U.S.

Vice President Harris convened a cabinet meeting on maternal health care, marking the first time an administration had held a meeting at the Cabinet level to address the issue.

Harris pointed to the high rates of maternal mortality the U.S. has in comparison to other, so-called “developed” countries.

While the entirety of the meeting was not publicly aired, Harris stated that they would be discussing issues regarding housing, nutrition and transportation.

E-cigarette company Juul will pay $22.5 million to settle a lawsuit brought by Washington state that accused it of marketing its products to underage customers, state Attorney General Bob Ferguson (D) announced in a statement.

Ferguson sued the company in September 2020, alleging that it violated the Consumer Protection Act tens of thousands of times by creating and marketing products catered toward underage customers. The lawsuit also accused the company of deceiving customers about how addictive its products are.

In addition to the multimillion-dollar payment, which the company must pay over four years, the settlement also requires that Juul does not use advertisements that appeal to youth and halts most social media promotions.

The company, however, announced in 2019 that it was suspending all broadcast, print and digital product advertising in the U.S.

The settlement also requires that Juul factually markets the content and effects of the nicotine contained in its products. It mandates that the company conducts at least 25 secret shopper checks per month at Juul retailers in the state for at least two years. At least one check must be conducted in every county in the state per year.

The White House announced Wednesday that Lisa Barclay, a top Department of Health and Human Services (HHS) lawyer, is becoming the No. 2 official overseeing the administration’s COVID-19 response.

Barclay is assuming the role of deputy White House COVID-19 response coordinator, under Ashish Jha, the dean of the Brown University School of Public Health who started this week as the new coordinator.

Jha, known for his communications and public health knowledge, does not have extensive experience in government or navigating bureaucracy. Barclay, therefore, a government veteran, could help in those areas.

The White House touted her experience in a statement.

“Barclay has served in multiple Administrations, most recently as Deputy General Counsel for the Department of Health and Human Services where she has been instrumental in helping manage the COVID-19 response,” a White House official said.

“Barclay brings with her extensive experience working in the Executive branch, helping to develop regulations, guidance and processes at FDA, CDC, and across HHS.”

In addition to her current role at HHS, Barclay served as Food and Drug Administration chief of staff during the Obama administration.

That’s it for today, thanks for reading. Check out The Hill’s Health Care page for the latest news and coverage. See you tomorrow.