Harmon: Scheffler will be hard to beat, he has all the tools

World No 1 Scottie Scheffler takes five-stroke lead into third round at Augusta National after reaching eight under par – watch The Masters throughout the week exclusively live on Sky Sports Golf, with bonus feeds via red button World No 1 Scottie Scheffler will take a five-stroke advantage into the third round of The Masters – and Sky Sports’ Butch Harmon says the in-form leader can handle the pressure.

Scheffler has won three times on the PGA Tour since February but is in “unknown territory” atop the leaderboard by such a margin after two rounds of a major.

The 25-year-old fired seven birdies all told on Friday, including four in five holes on the back nine, with his closest challengers now Shane Lowry, Charl Schwartzel, Hideki Matsuyama and Sungjae Im at three under-par.

Harmon said: “He is playing with a tremendous amount of confidence – he probably comes in more confident than anybody in this great tournament.

“He is the best player in the world at the moment and has won three times in the last two months.

“His caddie Ted Scott has already won two Masters titles with Bubba Watson so they have knowledge but there is a lot of golf to play.

“This is unknown territory for him, a new thing – a five-shot lead after two rounds of a major championship. Can he handle the pressure? I think he can.

“We know at Augusta National that there are all kinds of wrecks waiting for you if your mind wanders a little. If he gets ahead of himself or his concentration isn’t 100 per cent, it can happen.

“If nobody puts any pressure on him then he is going to have a free ride, a nice Saturday afternoon walk in the park at beautiful Augusta National, but I think there are guys who are going to run up on him. That’s what we need.

“With every aspect of his game – driving, iron play, wedge, putting – he is in complete control and is going to be very hard to beat.

“He has all the tools – the physical skills, the mental skills. Can he handle his nervous system? That is going to be the key.” 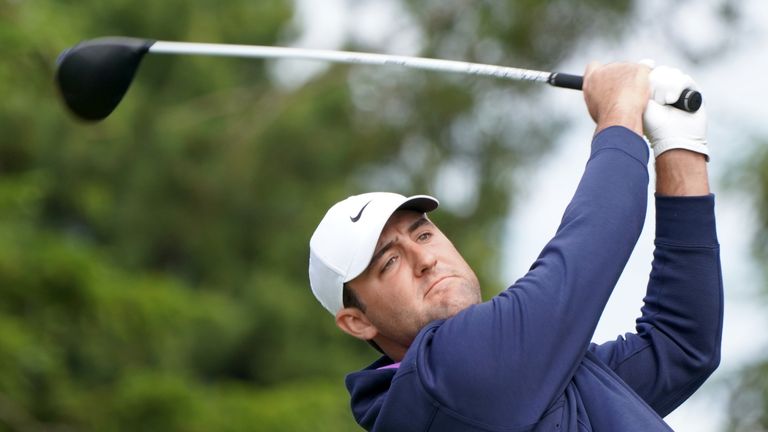 Scheffler said: “I feel like my game is in a good spot.

“I’ve done a good job managing my way around the course and I’ve made some really nice up and downs and key putts that have kept my rounds going.

“If anything, [the lead] gives me more confidence. Once I saw that I took the lead, my first thought was to just keep trying to build it just because I feel like I’m playing well.

“That will be the goal going [into Saturday], just to keep putting myself in good positions, execute shots. As long as I’m committed to everything, everything should be fine. The rest really isn’t up to me.”

Watch The Masters exclusively live on Sky Sports Golf, with additional feeds and bonus action during all four rounds available via the red button.