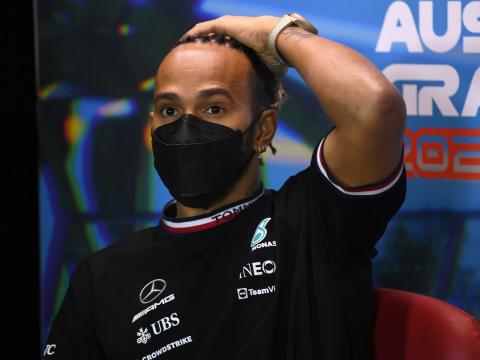 Hamilton on Collision Course with F1 Chiefs over ‘Bling’ Ban Formula One drivers have been reminded that they are not allowed to wear jewelry while racing, prompting Lewis Hamilton to joke Friday he had piercings he can’t take out.

The ruling was included in the event notes for this week’s Australian Grand Prix issued by new FIA race director Niels Wittich, who is in the role at Albert Park following the sacking of Michael Masi.

It is not a new regulation, but reportedly follows some drivers being spotted wearing jewelry while in their cars, AFP said.

“The wearing of jewelry in the form of body piercing or metal neck chains is prohibited during the competition and may therefore be checked before the start,” the ruling states.

A number of drivers wear jewelry in the paddock, which is allowed, notably seven-time world champion Hamilton.

“I’ve got several piercings that I really can’t take out, that not a lot of people know of,” the Briton joked when asked about the ruling.

“But that’s been the rule forever so nothing new,” he added.

The ban was introduced in 2005 as a safety precaution to reduce the risk drivers face when they need to escape from a car following a crash.