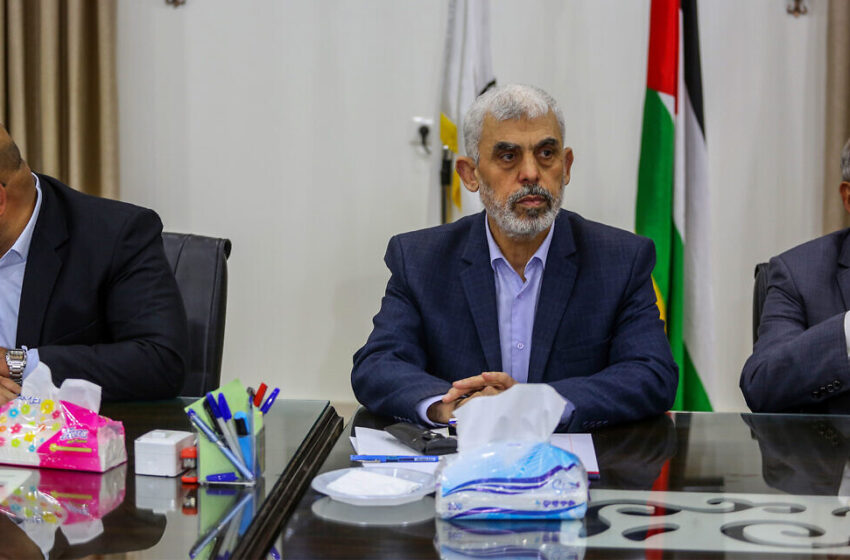 The leaders of Gaza terror groups convened in the Strip on Wednesday to issue a unified call for an escalation against Israel, as tensions spike surrounding the Temple Mount and Al-Aqsa Mosque in Jerusalem.

The Hamas terror group, which rules Gaza, had called for the meeting earlier Wednesday after it vowed to stop Jewish activist activity at the flashpoint holy site “at any cost.” The head of Hamas, Yahya Sinwar, led the meeting.

“We are declaring a general mobilization in all places where our people are located. We are calling on the masses to come out in the hundreds of thousands to protect our nation and our mosque,” the Gaza groups said in a statement.

The Muslim holy month of Ramadan, typically a period of high tension, is underway, and thousands often attend prayers in Jerusalem.

“We call on our people to march and go out in the hundreds of thousands to hold Friday prayers at Al-Aqsa,” the groups said, according to Channel 12. The network said all “factions” in Gaza were represented at the meeting. The coastal strip is home to other terror groups, including Islamic Jihad, a rival to Hamas.

The meeting had been called to discuss “Zionist threats to invade the Al-Aqsa Mosque on Friday and conduct sacrifices,” among other issues, a senior Palestinian source told Safa News. An extremist Jewish group earlier this week called for ritual sacrifices at the site, inflaming the Palestinian public and Arab leaders. 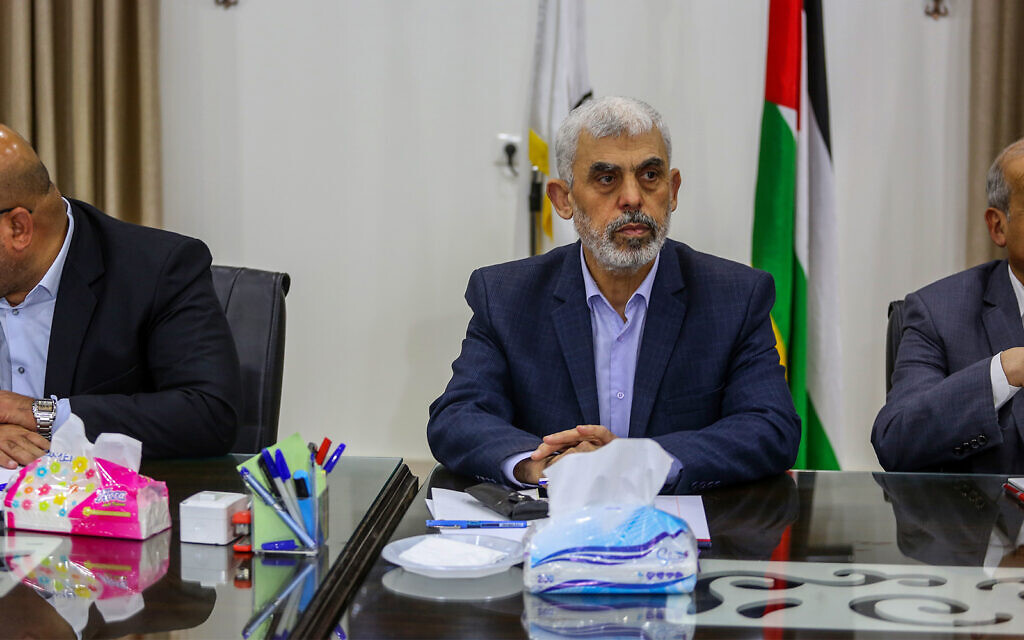 Yahya Sinwar, leader of the Hamas terror group, hosts a meeting with members of Palestinian factions, at the Hamas president’s office in Gaza City, on April 13, 2022. (Attia Muhammed/Flash90)

“We call on all our nation to mobilize and support Silwad and all areas of conflict,” al-Arouri said.

Tens of thousands were already expected to attend Friday prayers at Al-Aqsa. Most of the Ramadan worshipers will cross into Israel without permits, part of a policy to loosen normally tight Israeli restrictions on Palestinian movement for the holiday.

Allowing in thousands of Palestinians carries a clear security risk for Israel, but clamping down on worshipers during Ramadan could spark an outbreak of violence.

The Temple Mount is the emotional epicenter of the Israeli-Palestinian conflict and tensions there can easily snowball into wider conflagrations. Hamas and other Gaza-based terror groups have repeatedly invoked the flashpoint holy site as a red line. Police actions to quell riots there last year helped trigger the 11-day war in Gaza in May. 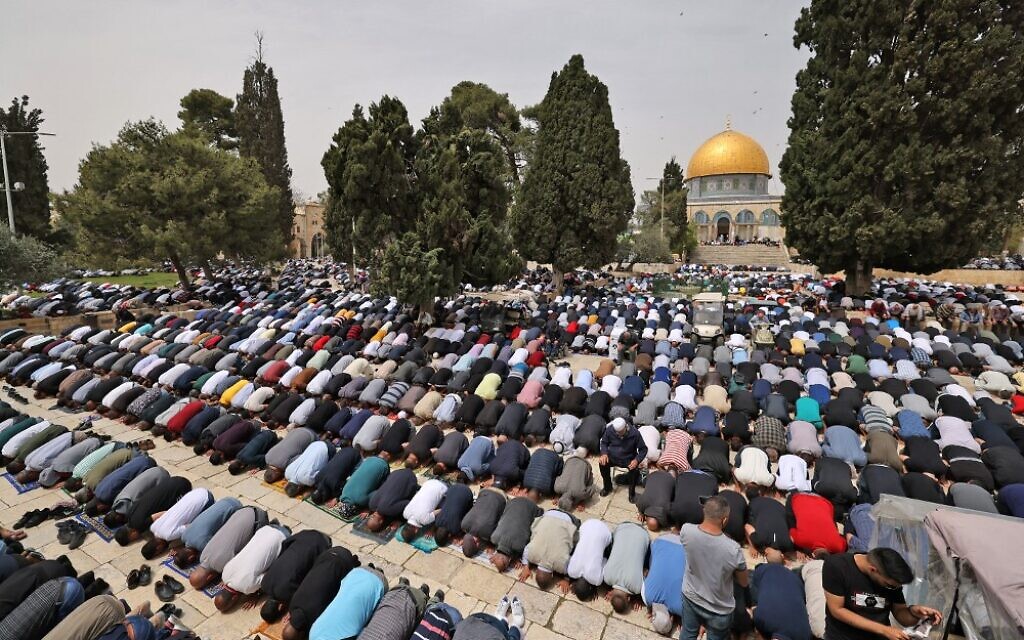 The site is Judaism’s holiest place, and the mosque is Islam’s third-holiest. Jews are allowed to visit the compound, but not pray or perform religious rituals, as part of a delicate status quo.

In addition to the holiday friction, tensions between Israel and the Palestinians have heated in recent weeks following a series of attacks on Israelis. Terrorists, including both Arab Israelis and West Bank Palestinians, killed 14 people in Israel in the deadliest outbreak of violence in Israel in years. The attacks have prompted countermeasures from Israeli security forces, including arrests that have spilled into violence.

At the same time, Ramadan, Passover and Easter will all overlap this month, further driving up the risk of conflict. Israeli officials have warned for months that the convergence could spark an escalation of violence.

Earlier Wednesday, Hamas threatened Israel over plans by Jewish activists to conduct ritual sacrifices on the Temple Mount for Passover.

The Returning to the Mount extremist group, which advocates the construction of a third Jewish temple on the site that once housed the two biblical Temples, announced on Facebook on Monday that it would be offering a cash prize to those who manage to sacrifice a lamb on the Temple Mount, and to anyone arrested trying to do so. 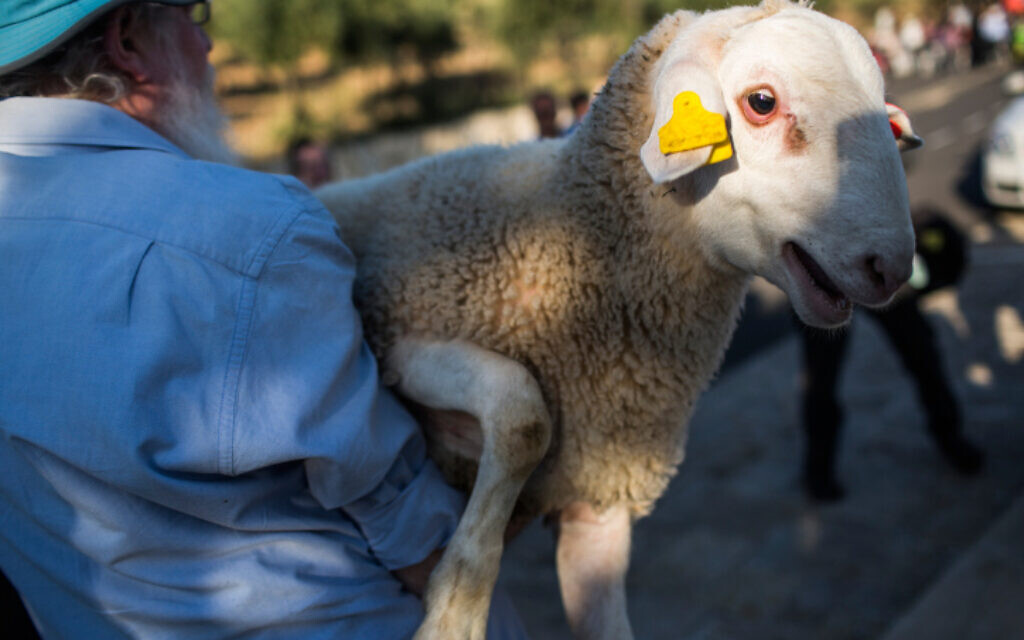 A sheep is carried for the Passover Sacrifice ‘practice’ ceremony at Beit Orot in East Jerusalem, on April 18, 2016. (Hadas Parush/Flash90)

A small group of Jewish extremists has occasionally sought to perform the Biblically mandated Passover sacrifice on the Temple Mount. Police have regularly detained the perpetrators, who do not appear to have successfully pulled off a sacrifice in recent years at the site.

This year’s would-be sacrificers’ campaign has gained enormous traction in Palestinian and Arab media following the social media post offering cash prizes for those arrested in the act.

The post drew threats from Hamas and condemnation from Jordan and the Palestinian Authority.

“We stress that this represents a dangerous escalation that crosses all red lines, as it is a direct assault on the belief and feelings of our people and our nation during this holy month,” Hamas said. “We hold [Israel] responsible for all its repercussions.”

Also on Wednesday, in the West Bank town of Silwad, Israeli forces arrested three Palestinians suspected of planning to carry out imminent attacks. Soldiers also arrested a suspect in the nearby town of Kobar. All four suspects were taken for Shin Bet questioning. 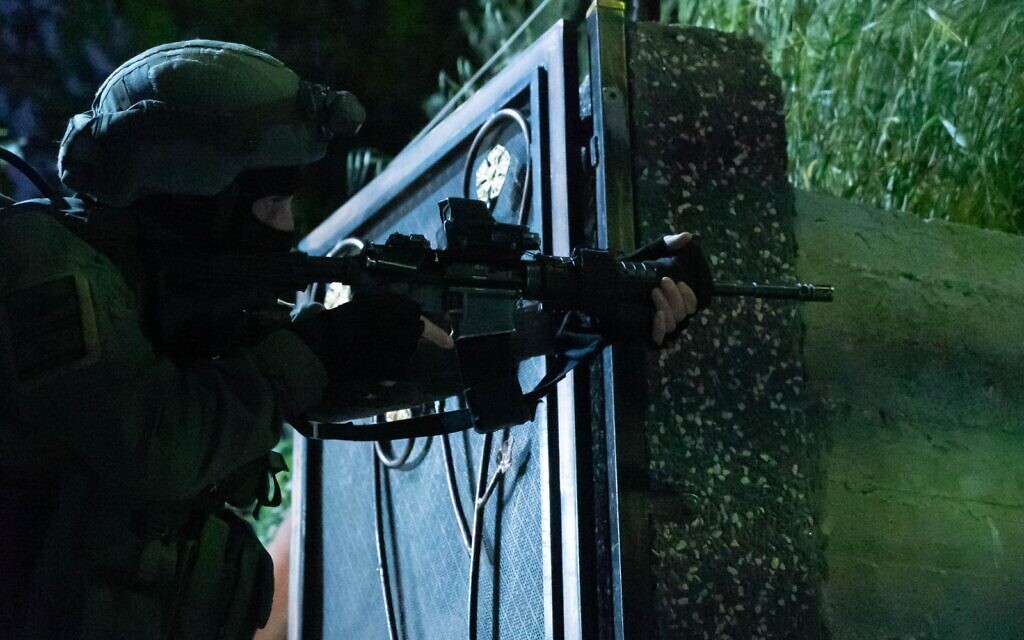 Clashes erupted during the raid in Silwad, with Palestinian officials reporting one man shot and killed by Israeli troops.

Palestinians suspected of terror activities have been arrested in raids across the West Bank in recent days as Israel steps up its response to threats. Most of the activity has been centered around the northern West Bank city of Jenin, though forces also turned their attention to the Ramallah area in the central West Bank Wednesday.

Israel has sent troops to comb through Palestinian cities and villages, looking for suspects or accomplices tied to recent attacks on Israelis. Last week, a Palestinian gunman opened fire on a packed Tel Aviv bar, killing three and fleeing the scene, sparking an hours-long manhunt that culminated in his killing by police.

That assault, as well as three other attacks elsewhere in Israel in recent weeks, have killed 14 people, the deadliest outburst of bloodshed against Israelis in years.

Fifteen Palestinians across the West Bank have died in clashes with Israeli soldiers in the past two weeks. Several were terror group members killed in firefights with troops, while others were apparently unarmed civilians killed by mistake.

Also, Palestinians have vandalized the West Bank shrine believed by some to be the tomb of the biblical Joseph twice in recent days and attacked Jews who went to pray there.

The shrine was restored and renovated by Israeli forces on Wednesday morning in a rare daytime operation.