T﻿he ripple effects from the allegations hounding Alastair Clarkson from his time at Hawthorn appear to be coming during the trade period.

After arriving at North Melbourne amid much fanfare, Clarkson’s tenure could potentially be ended before it begins, depending on the outcome of the impending AFL investigation into the historic allegations.

With the trade period opening on Monday, ﻿the impact of the allegations surrounding Clarkson are beginning to show. 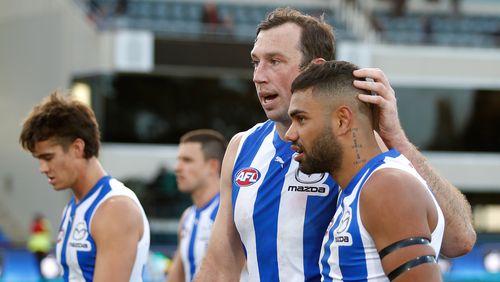 Leading AFL columnist Damian Barrett said Jason Horne-Francis’ trade request is “Alastair Clarkson doubt related” according to the Kangaroos, and last year’s No.1 pick could be joined by another talented young star asking out. ﻿

According to SEN’s Sam Edmund, 22-year-old midfielder Tarryn Thomas is “wrestling with requesting a trade” away from the Kangaroos.

Thomas is contracted at North Melbourne until the end of the 2024 season, and it would require a significant trade package from a rival to prise him out of Arden Street.